The stage is set for the meeting of Clonakilty and St Finbarr's in Sunday's Cork Premier SFC final at Páirc Uí Chaoimh. (Photo: Jim Coughlan)

THE two weeks in between the semi-final and county final will be a hectic period for St Finbarr’s manager Paul O’Keeffe and his Clonakilty counterpart Haulie O’Neill.

Hours will be spent trawling through match videos looking for those percentages that could swing the tie your way. Meetings with your backroom staff. Deciding on tactics and match-ups. Injury updates. Planning the final training sessions. Keeping players sharp. Keeping players relaxed. Playing out every possible scenario in your head. What will I do if ...? All the little things that can add up to enough to get you over the line in Páirc Uí Chaoimh on county final day.

What you cannot legislate for is the unexpected on the day. Thinking about all this brought me back to 2014 when I was in charge of Carbery Rangers and we played Ballincollig in that year’s Cork SFC final. We went on a training camp to Fota Island the weekend before the final. We spent two days down there training and meeting, putting the final touches to our assault on Ballincollig in what was our first appearance in a senior final in the modern era. We had left no stone unturned. We were ready to go. The match couldn’t come soon enough.

We went 0-6 to 0-0 up and then led 0-9 to 0-3 heading into the final ten minutes of the first half. I remember being on the line and my gut told me to shut up shop and take this lead to half time. But my head was saying keep playing, that if we keep going this could be out of reach by half time. As it happened the game turned a little in the subsequent minutes with Ballincollig getting the next three points and with it, taking the momentum in with them at half time. We were still in a very good position.

The next thing was a big collision around the middle between James Fitzpatrick and Sean Kiely. Both had to leave the pitch. James Fitz wasn’t in a position to return for us. Kiely came back on and had a big influence on the remainder of the game. We lacked a bit of experience in key areas and with Ballincollig’s Paddy Kelly and Johnny Miskella growing in stature, the game started to go away from us. Finals are often decided by the unexpected. As a manager you try to plan for them so that nothing shocks you, but big games can take on a life of their own.

So the unexpected aside, what are the strengths and weaknesses of the top two club football sides in Cork for 2021? What will Haulie O’Neill and Paul O’Keeffe be doing to maximise their own strengths and minimise the oppositions?

Clon will be looking to keep the scoring rate down. Key to that is limiting the in-form Steven Sherlock to six or seven points, including frees. Having racked up 2-10 against Castlehaven and showing new levels of mental strength, work-rate and physical fitness this season, Clon’s defensive structures are in for a serious examination. Either Thomas Clancy or Maurice Shanley will be detailed to mark him with the other taking Conor McCrickard. My choice would be Shanley which would allow Clancy to have more influence bringing the ball out of defence.

Sherlock got the last three points for the Barrs in extra time in the semi-final and everybody was talking about his calmness to slot the equalising free. But it is the previous two points that Clon need to be really focusing on. The Haven had numbers behind the ball as Clon will, doing their best to hold out. The Barrs were patiently holding the ball waiting for Sherlock to come alive. All of a sudden he chose his moment, looped around the ball carrier and almost with no back-lift slotted two wonderful points. The key to him getting away was Damien Cahalane got caught in traffic on both occasions in his efforts to close him down. This is where Gearoid Barry, who plays a defensive role anyway, comes into it. He needs to be the second man detailed to Sherlock, ignoring everybody else and watching for that moment when he makes his move to get into a scoring position.

The Barrs racked up 17 wides in the semi-final win against Castlehaven and will see their big runners like Ian Maguire, Brian Hayes, Denis O’Brien and Eoin Comyns as the key to punching holes in Clon’s rear-guard. They will need to retain the ball patiently but with pace in order to create gaps for these guys to move onto the ball at speed and draw fouls off this well-disciplined defensive unit. 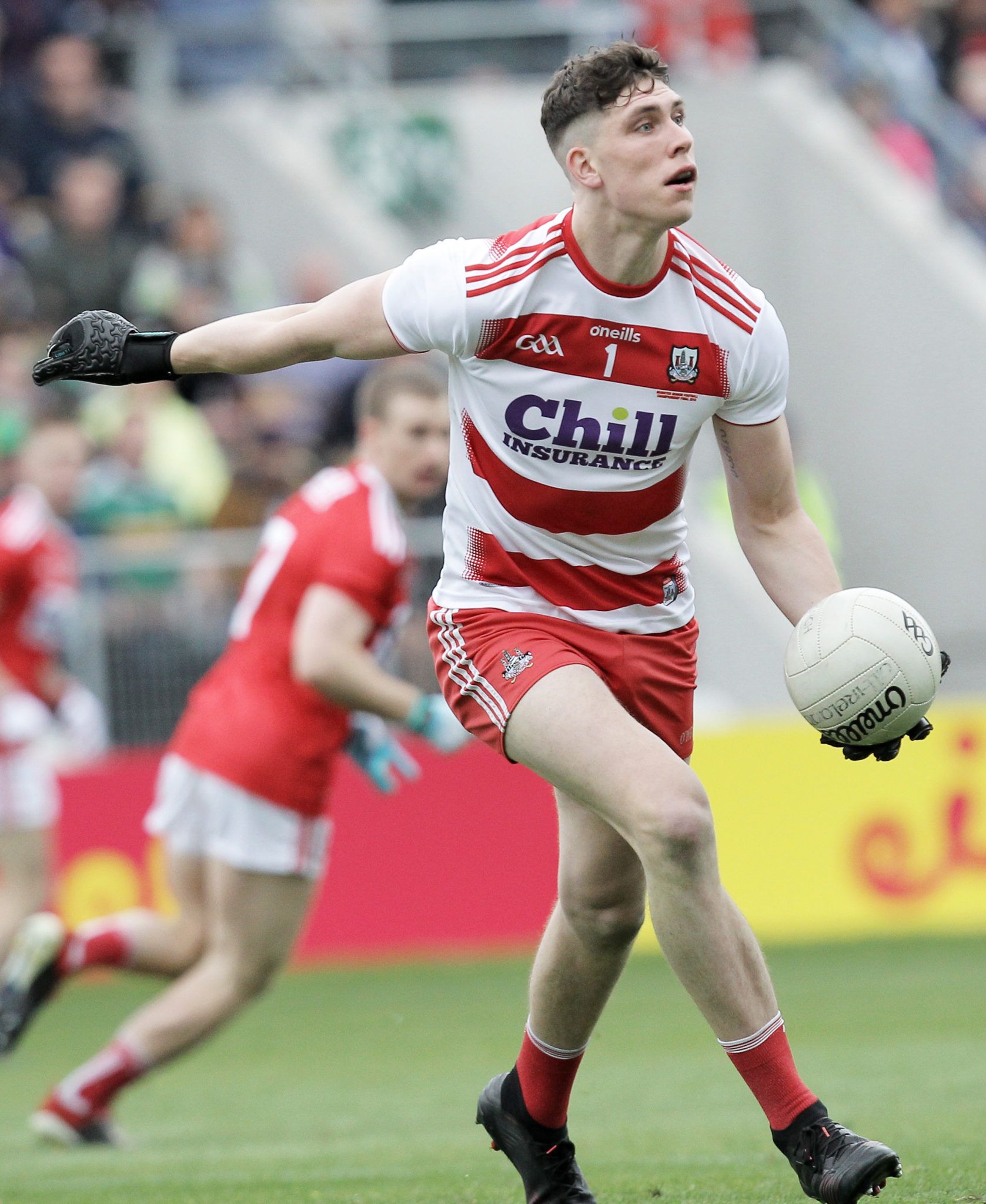 Mark White’s kickouts will be a telling factor. The Clon goalkeeper will need to hit his targets on the move, like David Lowney as he did against Douglas. Shutting Lowney down as an option and forcing White long will be a priority for the Barrs. In the group stage the Barrs beat Clon 1-12 to 1-5 with the Barrs goal coming as a result of Mark White’s sweeper-keeper role. This role is working but he needs to be careful choosing his time to go. No doubt one of the Barrs midfield giants will be looking for heavy contact with him early to try and upset his game.

The Barrs showed quite a bit of arrogance in allowing the space they did in front of the Hurley brothers in the semi-final.

This most likely will materialise again so Clon’s ability to break out of defence quickly, keeping their game wide and getting their 40-yard foot passes away into that space for Sean McEvoy and Ross Mannix to tear onto should yield dividends. Sam Ryan most likely will pick up McEvoy and he will be a step up in man-marking ability from what he faced against Douglas.

Clonakilty don’t have a Brian Hurley or a Steven Sherlock or a Luke Connolly or a John Hayes; a guy that will rack 1-8 in a county final. Their most likely candidate is Dara Ó Sé but he needs to get 1-2 at least from play plus five or six frees. Who will be detailed on Barrs’ midfield man Ian Maguire? Knowing Haulie O’Neill, most likely it will be Ben Ridgeway. A guy willing to sacrifice his own game to limit the opposition's talisman's influence. Will the Clon running wing backs cope in the air with the Barrs or will their ability and pace give Clon the impetus?

With Liam O’Donovan out injured, Clon’s bench will be tested. The Barrs showed the strength of their bench the last day out with Michael Shields, Comyns and Cian Walsh making telling contributions on their introduction.

There are so many ifs and buts that the unexpected could end up throwing this game one way or the other. Clon are in with a big shout here but I’ve fancied the Barrs since early in the group stage and I am sticking with them to regain Andy Scannell Cup on Sunday. In short, they are more balanced, more experienced and they have a better bench.