St James' Frank Hayes breaks past St Oliver Plunkett's Ronan McCarthy in a league game this summer. Both teams are in championship action this weekend.

THE junior footballers of St James and St Oliver Plunkett’s may have been looking forward to the resumption of action after the long lockdown but their return to the playing field was spoiled by the unseasonable summer weather.

Thirty-eight minutes into this Dubliner Cheese Round 1 League Cup game in Ardfield last Tuesday night, the fog that had shrouded the pitch from the very beginning thickened so much that it was impossible to see either goalmouth from the halfway line in the pitch. Referee Stephen Murphy had no option but to abandon the game.

The scores were level at the time but it will now be decided whether to take the score at the time of the cessation as the official score or whether to replay the game later in the season, time permitting.

Playing against the slope in the first half, it was the home side that looked the livelier side but dogged Plunkett’s dug in and by the first water break, the sides were level at 0-3 each. Frank Hayes kicked two points for St James and Sean O’Reilly kicked a third. MP Keohane hit two in response for the Magpies and Tim Coffey landed the third. 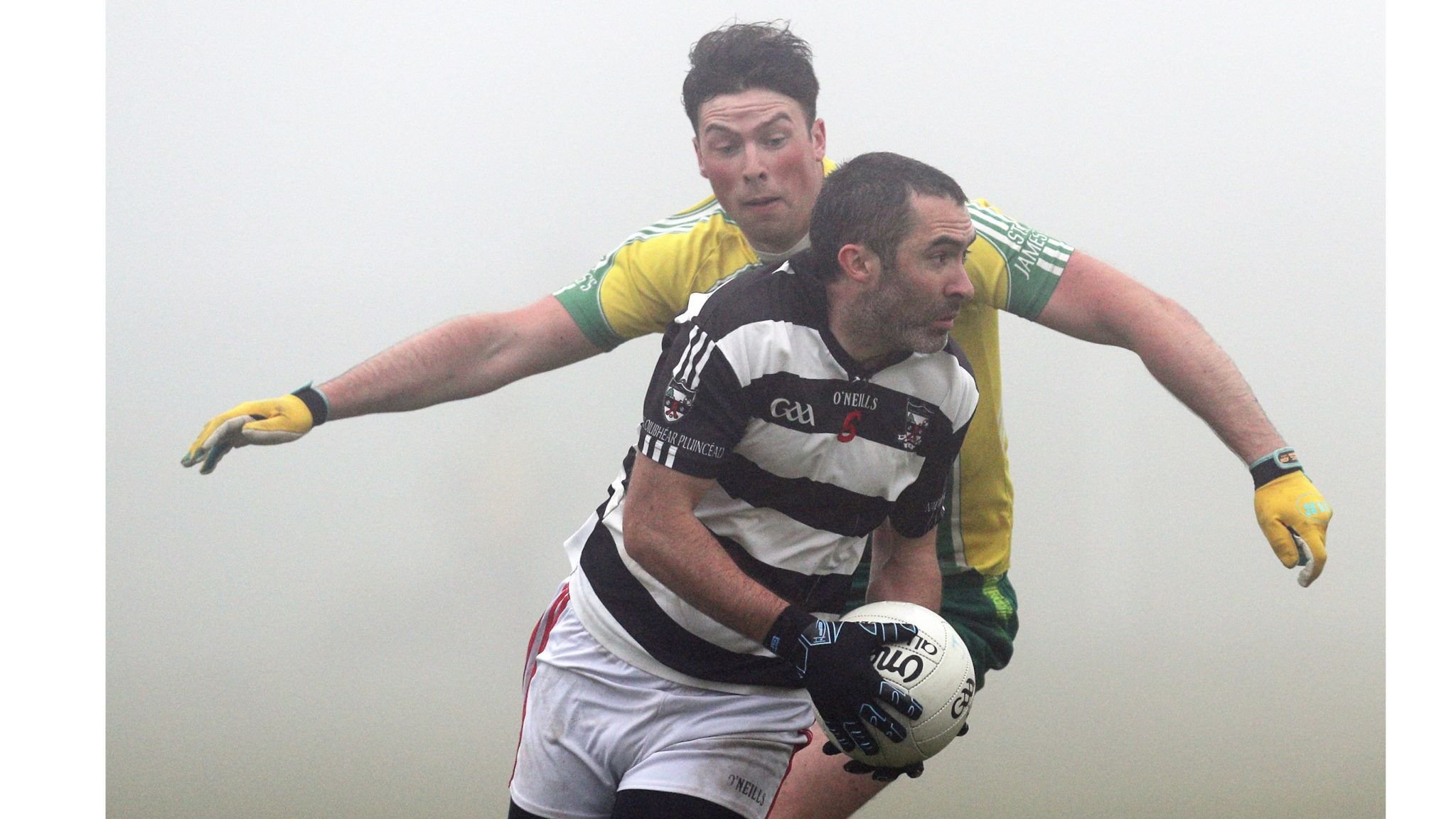 St Oliver Plunkett's Gary McCarthy comes out with the ball under pressure from St James' Conor Brown during the Dubliner Cheese League Cup game at Ardfield on Tuesday evening.

St James struck a big blow straight after the water break when the strong Aaron Hayes finished to the net following a good centre from Sean O’Reilly. MP Keohane pointed a free for Plunkett’s but when St James kicked two points from Aaron Hayes and Sean O’Reilly, they were four to the good and in control, despite a black card for full back Mícheál McCarthy (Donnycove).

Hardworking midfielder Conor McCarthy closed the gap with a point but in the 26th  minute full forward Conor Brown lashed the ball to the Plunkett’s net and there were two clear goals between the sides.

Still, Plunkett’s battled on and a touch-in goal by Niall O’Driscoll halved the deficit in the 29th  minute. The first half, with the fog worsening, finished with a pointed free for St James by Joseph O’Sullivan. It was 2-6 to 1-5 at the break as we watched the goalposts at both ends slowly disappearing in the fog.

The second half began with a real surge from Plunkett’s and even though we could only guess at what was really happening in the goalmouth, Conor McCarthy raised a green flag for the Ahiohill men and Cathal Carlos struck the equaliser. It was 2-6 each.

At that stage, referee Stephen Murphy decided that discretion was the better part of valour and, to everybody’s relief, abandoned the game as the weather emerged as the only winner on the night.

Up to the time of the stoppage, the players, a mixture of veterans and youth on both sides, had shown little signs of rust after the long layoff and the fare served up, or what we could see of it, was quite entertaining.