DOWN five points at the first water break and still five behind at half time, St James’ title bid looked in big trouble in the Bandon Co-op junior C/D football championship final (2021) in Ardfield on Sunday morning.

Goals win games, they say, and luckily for St James, one of their four first-half scores was a goal by Ian Evans in the 25th minute. That goal kept them in touch. Still, it would have taken a brave man to put money on them winning the game at half time.

The second half told a completely different story as the winners upped their game considerably on the restart, took control of the middle third of the pitch and deprived the lively Caheragh forwards of the possession they had thrived on in the first half. Limiting MacCarthaighs to a single point in the third quarter, the Saints were level by the second water break, courtesy of a fisted goal from sub Kieran O’Donovan, who made a huge difference in the second half.

The last quarter provided a ding-dong battle as Tadhg MacCarthaigh recovered somewhat but the Saints were not going to be denied a title win on their own pitch. They outscored the opposition by 0-2 to 0-1 in the closing minutes to lift the Dullea Cup. The first silverware of 2022 was staying in Ardfield and in view of the fact that they struck the crossbar twice during the game, as well as kicking two goals, they fully deserved this win.

‘That was almost better than winning the junior A,’ admitted Alan O’Shea, the man who was in charge of both teams.

‘There's a fierce spirit in this team and that comeback was unreal, fantastic. There are fellas here who wouldn’t have any football only for this competition, some, like Sean Lawless, haven’t played for about four years. They put in a big effort and really enjoyed the championship which gave us about five games. We trained one night a week and had a fine turnout every night. I would strongly recommend that this competition be run every season and at the same time of the year. It wasn’t an easy competition, but it really brought on some of the team, especially the younger lads.’

Even though St James took an early lead with points from Damien Bennett (free) and Diarmuid O’Sullivan, answering an opening score from Tadhg MacCarthaigh’s Denis O’Sullivan, it was the Caheragh men who took control of the first quarter. With George Gill, Anthony Daly and Paul O’Hea driving forward from the half-back line and Leon Burke and Paul Keane dominating midfield, their forwards got a plentiful supply of the ball, which they used extremely well.

Burke began the scoring surge with a point and then lively corner forward James McCarthy burst on the scene with three superb points in three minutes. Colm Crowley added another and when McCarthy had his fourth point, MacCarthaighs were 0-7 to 0-2 in front at the water break. 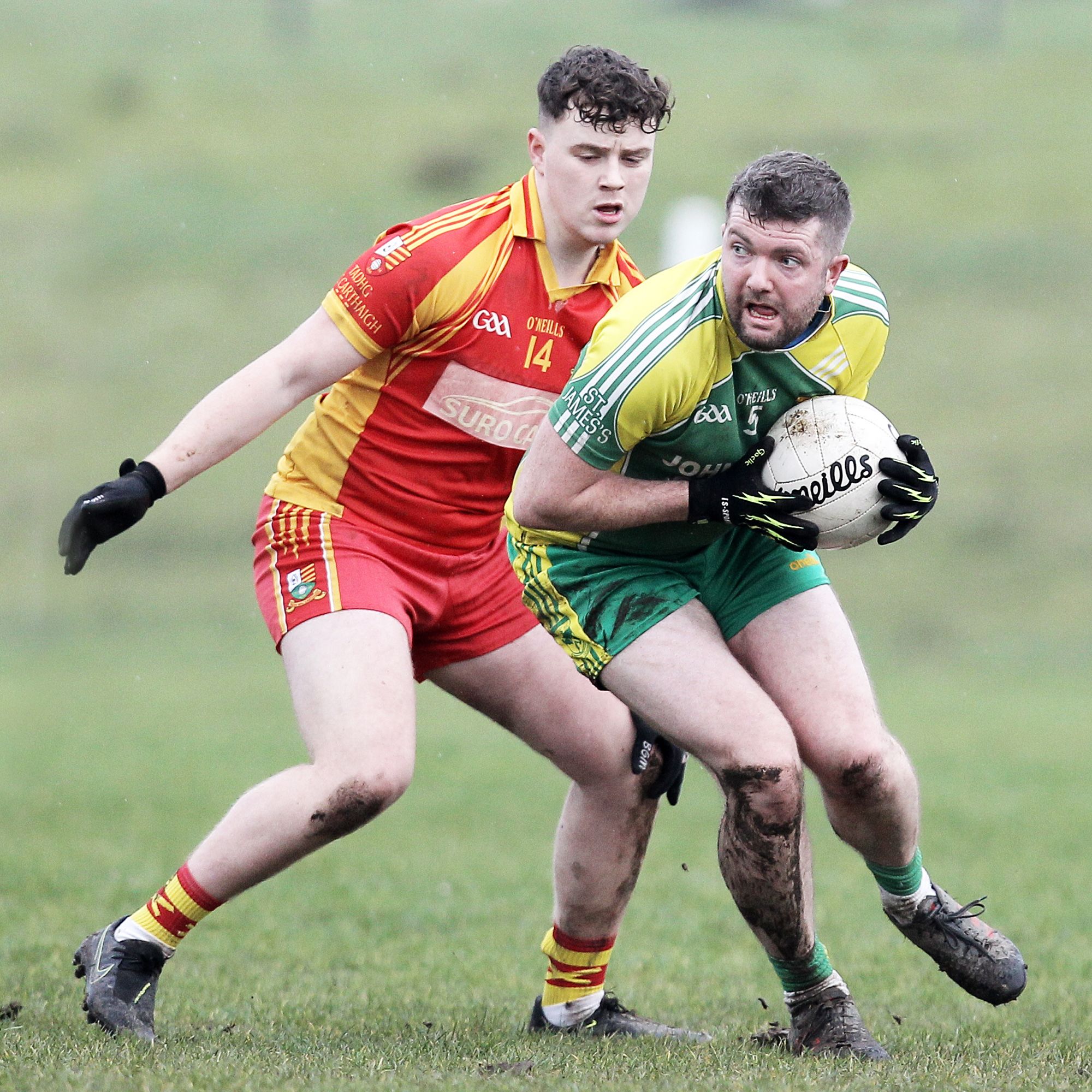 Ian Evans opened the scoring in the second quarter but it was Tadhg MacCárthaigh that retained control. Points from McCarthy (free) and Colm O’Sullivan had them six in front. It was then that the Saints struck for the most important score of the game when Michael Santry set up Ian Evans for a goal, against the run of play. It was the score that kept the home side in the game. Points from Colm Crowley and Dylan Murray restored MacCarthaigh’s five-point lead and it was 0-11 to 1-3 at half time.

Change of ends and change of game. A rejuvenated St James surged forward in search of scores. Points from Ian Evans (play and free) had the lead down to three. In the 40th minute Kieran O’Donovan rose highest to fist an Ian Evans’ centre to the net to tie the scores.

Tadhg MacCarthaigh shook themselves to hit the front again with a pointed free from James McCarthy but back came the Saints with a reply from hard-working midfielder Donncha McCarthy, and it was all even at the second water break, 2-6 to 0-12. 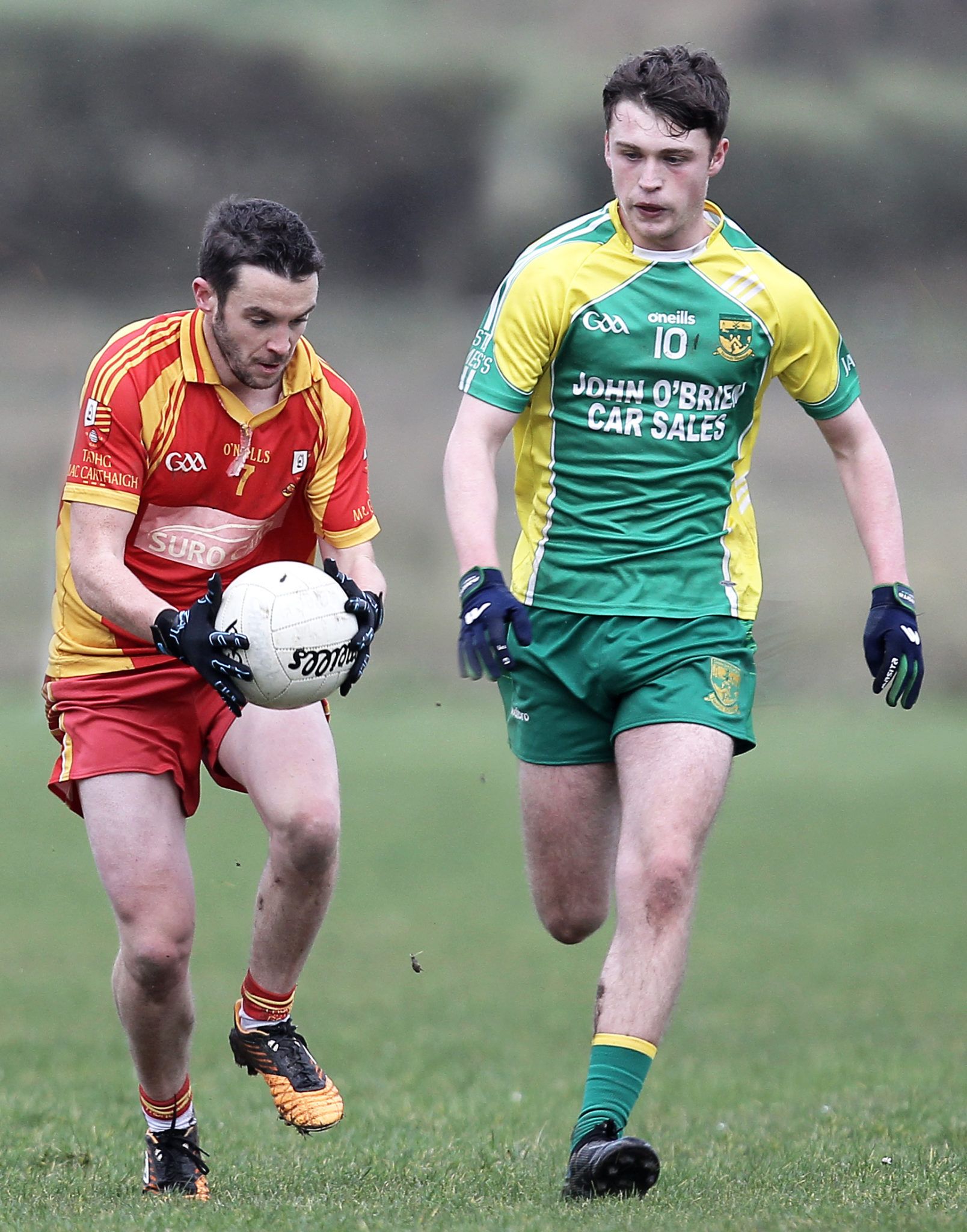 When Sean Lawless hit the crossbar in the last quarter one wondered if the Saints’ luck might be out but the pressure continued and points from Evans and Conor Frost had them on the road to victory. To their credit, Tadhg MacCarthaigh battled to the end and when sub Gary O’Driscoll pointed, the lead was down to one in the 57th minute. MacCarthaighs then lost full back Darren Lynch to a red card at a crucial stage. St James put up the shutters in the closing minutes to hold on for a great win, which was celebrated with delight as the Dullea Cup was presented to the captain Niall Evans by former secretary of the Carbery GAA Board, Donal McCarthy, who had organised the combined C/D championship.