The Drinagh Rangers team that won the U19 league title.

The club’s adult team might have missed out on being involved at the business end of this season’s Premier Division Cup and Beamish Cup, but the young guns have shown that their talent pool is far from dry.

First the club’s U17s won this year’s WCL U17 League crown before Danny McQueen’s U19 squad announced themselves to the West Cork League community by claiming the WCL’s U19 League trophy.

The newly-introduced age-grade provided players too old to play West Cork Schoolboys League football and still a bit too young to step up into the adult junior grades with an U19 grade and league trophy to contest. Drinagh got their campaign off to a flier by overcoming Durrus in Canon Crowley Park at the end of June. Cillian Fitzpatrick netted a hat-trick on an evening additional Sean Calnan (2) and Robbie McQueen efforts wrapped up a convincing 6-0 win.

Buoyed by that successful start, the Canon Crowley Park side travelled to Lauragh on July 1st and inflicted a heavy defeat upon a young Castlelack team. Darragh Coakley produced an eye-catching display and scored five times in a fixture Robbie McQueen, Tuan Shorten and Ciarán O’Regan also got their names on the scoresheet. 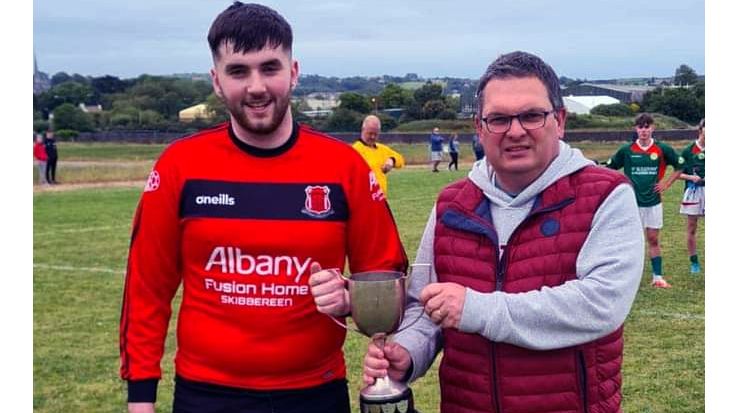 So, a final U19 League outing away to Ardfield meant all Drinagh had to do was avoid defeat and the trophy was theirs. Once again, Rangers overpowered their opponents and kept a third clean sheet en-route to a comprehensive title-clinching victory. Drinagh produced a commanding display and became champions thanks in part to James McCarthy’s superb hat-trick. Sean Calnan added a brace in a game Robbie McQueen, Tom McQueen and Owen Tobin also found the net to round of a superb team effort.

The hope is that with enough interest another U19 league will begin once again in September. It is hard to look beyond Drinagh adding to their trophy haul at the age-grade considering the depth of talent within their squad.

Robbie McQueen and Sean Calnan have already graduated to the club’s adult ranks and more of their 2021 U19 title-winning squad look like following in that duo’s footsteps.