Tom Wood from Enniskeane, All-round champion of Ireland in 1895 and 1896, pictured with the two championship belts and medals.

LONG before the Ballineen Bullet Phil Healy, the fastest woman in Ireland, came on the scene, another athlete from the Ballineen/Enniskeane area put West Cork athletics on the map.

Local hero Healy, now an Olympian and an inspiration to all, is following in the footsteps of one of the greatest athletes Ireland ever produced, but little known is known of him.

Over 125 years ago the Ballineen/Enniskeane area had in its midst a man who became All-round athletics champion of Ireland on two successive occasions.

Here we look at the marvellous achievements of T.E. Wood of Enniskeane on the sports fields of Ireland.

The Gaelic Athletic Association was set up in 1884 with the express purpose of reviving Gaelic games, especially hurling, and to take control of the athletics situation in Ireland. At that time athletics in Ireland were under the control of the British Amateur Athletic Association and ordinary workmen were not allowed to compete at meetings. Those meetings concentrated mostly on running events, to the detriment of old Irish pastimes like throwing weights and the hop, step and jump. The GAA was to change all of that as it took almost complete control of athletics in Ireland for the next 25 years. Sports meetings were opened up to all classes and all kinds of athletic events were included. 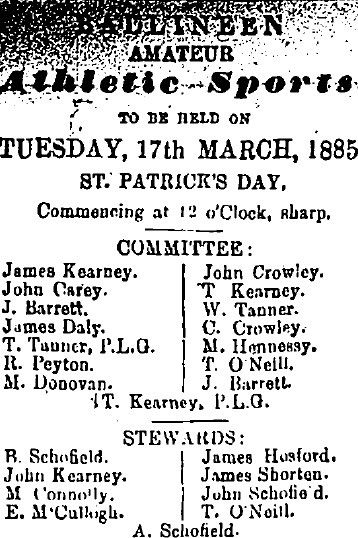 Ballineen was the first location in Ireland to hold a sports meeting under the newly-drafted GAA rules of January 1885.

On St Patrick’s Day, 1885, Ballineen was the first location in Ireland to host a sports meeting under the new GAA Rules, drafted in January 1885. Sports meetings under GAA Rules soon became common all over rural Ireland, no more so than here in West Cork, especially during the 1890s, and we find meetings being held in diverse locations such as the main towns and villages as well as rural areas like Barryroe, Newcestown, Coppeen, Castletownkenneigh, Rylane, Lisheen, Cononagh, Drinagh, Lisavaird, Sam’s Cross, Ballygurteen, Kilcoe, Kilmichael, Clohane, Goleen, Ballinascarthy, Leap, Dreeney, Lislevane, Reenascreena and Durrus. The standard at these meetings was extremely high, especially the largest meetings in Clonakilty, Skibbereen, Kinsale, Bandon and Dunmanway.

In the early years, the GAA placed more importance on the development of athletics than Gaelic games and set up an all-round GAA championship for the best all-round athletes in the organisation. Despite the existence of the rival Irish Amateur Athletic Association, set up in 1885, the winner of this GAA championship was rightly recognised as the champion athlete in Ireland.

The championship was held over one day and was similar to the present decathlon. The events included throwing the 16lb hammer; slinging the 56lb weight between the legs with follow; running long jump; putting 16lb shot; running high jump; 120-yard hurdles; running hop, step and jump; 440-yard flat; 100-yard and one mile flat. These were the events that were mostly held at ordinary sports meetings around the country.

Thomas Edward Wood, one of ten children, was born in Castlelands, just north of Enniskeane, in 1873 and took up athletics at a young age. We first came across his name in the winners’ lists at a sports meeting in Enniskeane in July 1891, exactly 130 years ago, when he won the 220 yards and the 56lbs throw. It was the only time he was referred to as Thomas Wood, ever after it was T.E. Wood. In the 1880s, the famous TJ O’Mahony, The Rosscarbery Steam Engine, was West Cork’s most famous athlete and in the early 1890s, Con Cahalane, captain of the Rosscarbery football team, was the best all-rounder but that was about to change with the advent of young Wood.

In 1892, Wood is mentioned in dispatches as one of the foremost 100-yard men in West Cork, with Cahalane as West Cork champion, and in 1893 his name was appearing regularly as a winner at various meetings. At Barryroe, for instance, he won the 100 yards, the high jump, the hop, step and jump, the 220 yards and the 56lbs throw.

In 1894, Wood entered the prestigious Queen’s University (UCC) sports and won the gold medal for the best all-round athlete, even though his name was mistakenly given as Mooney in the newspapers afterwards. At Timoleague, he won the high jump championship of West Cork with a jump of five foot nine-and-a-half inches, and at Coppeen he took home six first prizes.

For the first time he entered the All-round GAA championship of Ireland, held in Ballsbridge in Dublin, at the tender age of 21. The great Irish all-round champion, probably the greatest athlete Ireland has ever produced, Tom Kiely of Carrick-On-Suir, took first place, retaining his title with 21 points, Carey of the Dublin Police was second with 15 points and Wood took third with 13 points. Prize for first was a championship belt, second was a gold medal and third was a silver medal. Five points were awarded for first, three points for second and one point for third in each event. Wood ended the year as the 440-yards hurdles champion of Ireland.

1895 was the first of two outstanding years for Wood. For a change, Kiely did not enter the All-round GAA championship, held in Clonmel on August 8th because he felt his form was not good enough. Wood took full advantage to grab the title. In the end, the day boiled down to a contest between Wood and J. Flanagan of Kilmallock. While Flanagan had an advantage in the throwing events, breaking Kiely’s world record in the hammer, Wood was a better runner and jumper. 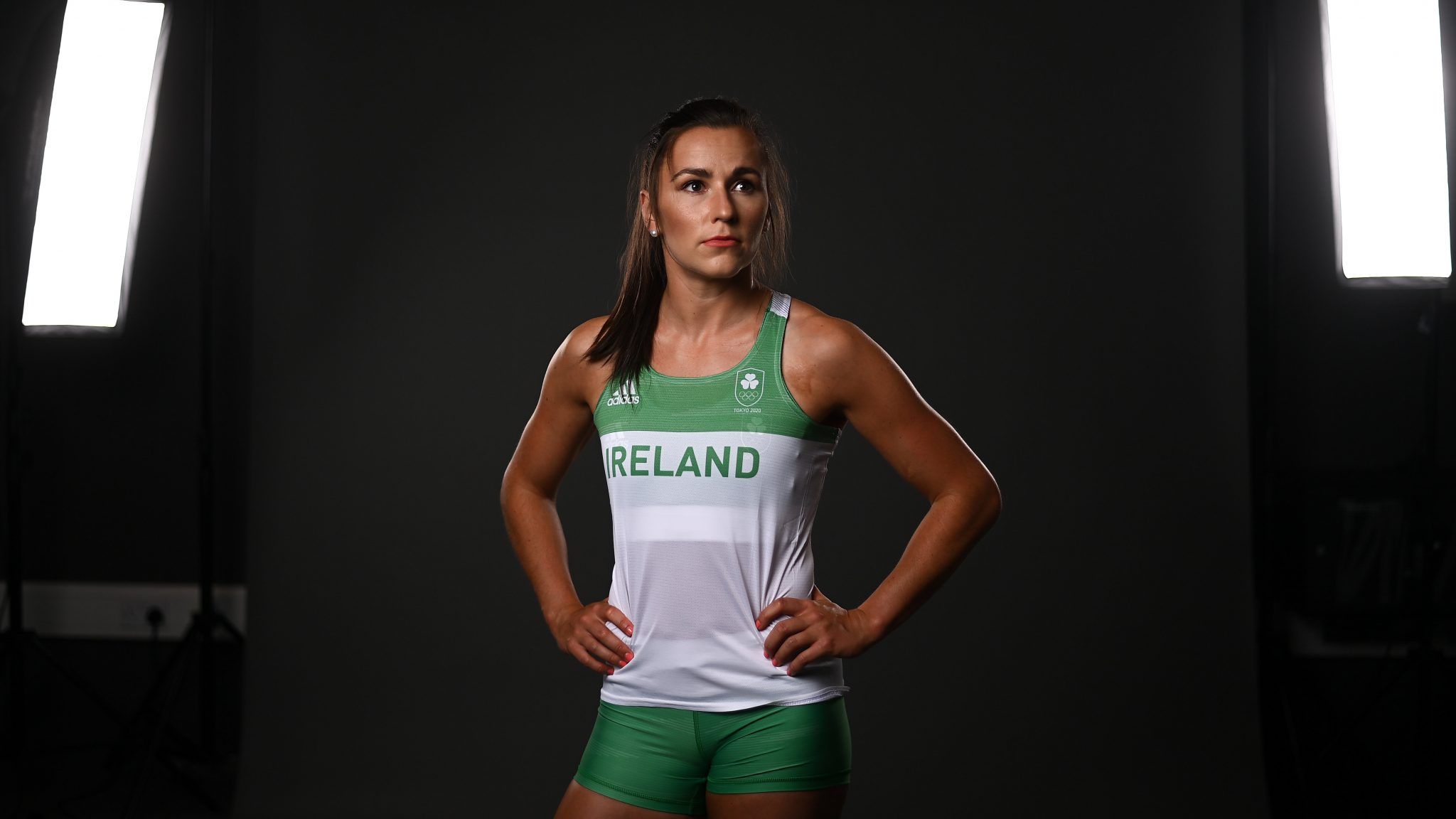 Ballineen woman Phil Healy is competing in the Tokyo Olympics.

While Wood got little chance to represent his country on the international scene, in 1896 he travelled to London to represent the GAA and also to Edinburg as a member of an Exhibition athletic team, taking part in the hop, step and jump.

From 1897 onwards Wood confined his competing to West Cork, continuing to win prizes, but towards the end of the decade he seemed to turn his attention to cycling, also under the control of the GAA. In Bandon in 1899 we find him winning two cycle races, the one-mile and the three-mile, while, at Innishannon, he won the three-mile and the five-mile cycling races.

Wood farmed for the rest of his life at ‘The Paddocks’, Enniskeane and in 1934 he was interviewed by The Southern Star as part of the GAA’s 50th anniversary. Aged 61, he was hale and hearty when interviewed but regretted the decline in Irish athletics since his days as a champion athlete. Apart from Dr. O’Callaghan, Olympic champion, and Bill Shanahan of the DMG, he considered the athletes of 1934 to be inferior to the men of his era. He classed the 1934 athletes as professional as they would not turn up for a meeting without being paid expenses and with good prizes on offer.

A trailblazer for athletics in Ireland 125 years ago, Tom Wood would surely be a proud man to see his legacy being carried so gloriously today by the Ballineen Bullet Phil Healy from his own parish.