Clonakilty RFC's U18 squad that finished top of their Conference League table and will contest a league semi-final in the near future.

GIRLS’ and women’s rugby in West Cork continues to thrive as evidenced by Clonakilty RFC’s ability to field two U14 girls’ teams.

The rise in underage and adult female rugby players has seen regional clubs like Bandon, Bantry, Dunmanway, Skibbereen and Clonakilty RFC report record numbers over the past 24 months.

Clonakilty RFC PRO and U16 girls’ manager Vicky McCabe is a member of her club’s 100-strong coaching set-up. The Shannonvale-based club has never been busier and continues to attract new members even in the middle of an already hectic campaign.

‘Clonakilty has 170 girls registered for the current season’ McCabe told The Southern Star.

Those are phenomenal numbers by any club’s standards, especially at U18 and U16. Sports like hockey, soccer, GAA and basketball suffer huge dropout when it comes to retaining playing numbers at those age-grades. Clon RFC appears to be bucking that particular trend.

‘I think it is because we have a very inclusive (club) policy,’ McCabe offered as an explanation.

‘We even had girls join our U16 team in the last couple of weeks. They heard about the club through their friends and just wanted to come and play. As I said, we are very inclusive and we start off anyone new by going through the basics with them and then making sure they are included in the team.

‘There is a great camaraderie, a great buzz and positive feeling around the club which is something we try to promote all the time.’

The club’s increased social media profile has helped promote their many on and off-field activities. Another attraction, to players and parents alike, is the club’s refreshing approach to fielding evenly-matched teams and ensuring girls get equal playing time irrespective of their ability.

‘Our minis rugby is non-competitive even though the girls treat it as competitive!’ Clon RFC PRO McCabe said.

‘Our U18s are doing really well at the moment and have finished top of their Conference league table. There is a semi-final and hopefully a U18 league final to come.’ 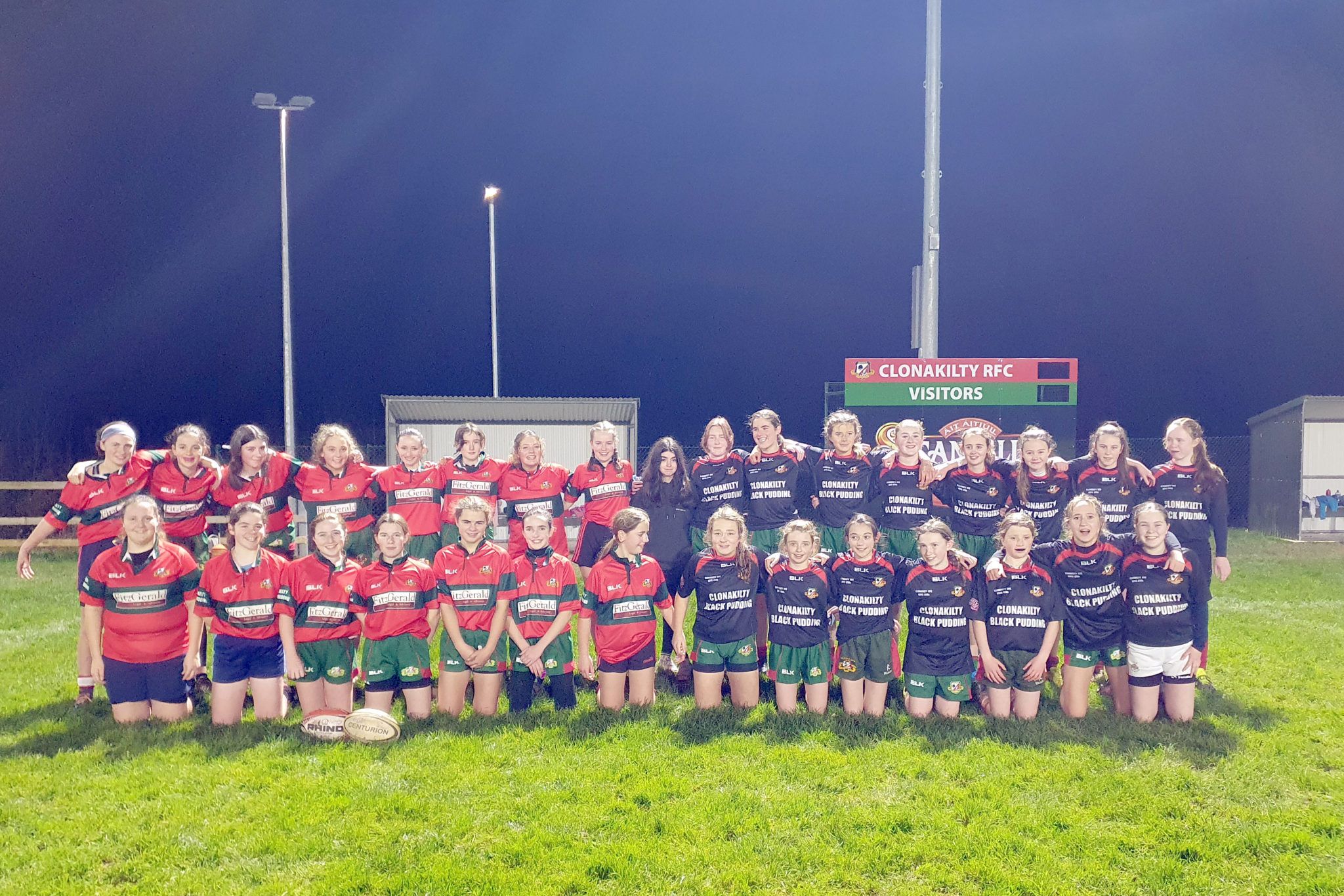 The Clonakilty RFC 'Red' and 'Green' U14 teams competing in the same U14 Conference League and who shared 14 tries in a recent league match at Shannonvale.

Clearly, the coaching being carried out at grassroots level in Clonakilty is having the desired effect. No less than nine of the club’s players are members of the current Munster U18 development squad.

‘It is worth noting that this is the first time we have fielded a U18 girls team in, at least, the last ten years,’ McCabe said.

‘They are leading lights in that they are the first U18s to represent the club in a long time.

‘We have nine girls selected to play for Munster’s U18 development squad. Kate Nolan, Kate Llewellyn, Caoimhe White, Eabha Egan, Susan Walsh, Maeve Dowling, Aisling O’Morain, Megan O’Callaghan and Alana Murphy are the girls involved and some of those have been playing with us for years. They are doing really, really well.’

It is Clonakilty RFC’s U14 girls teams that have attracted additional headlines however, featuring in a recent online Munster Rugby website article. Being able to field one U14 girls team is difficult enough but Clonakilty has managed to attract 45 players on the age and field two teams.

The Clonakilty ‘Reds’ and ‘Greens’ met in a recent Conference league game which produced 14 tries under Shannonvale’s floodlights.

‘You couldn’t give decent game-time to a squad of 45 girls, it is just not going to happen,’ McCabe explained.

‘So, for the first time in our club history, and possibly Munster girls’ rugby history, we have split the squad into two separate teams. The Red and Green U14 teams are split equally in terms of experience and were both entered into the same conference league.

‘They are competing against one another to get to the top which is quite unique. We had a huge amount of coaches involved with that team as well but everything is split down the middle. The club is supporting both teams equally.

‘They are both very competitive but all the girls are friends in school and known each other since they were babies! There is nothing left on the field when they play each other, they fight it out, absolutely!’

As both a coach and PRO, McCabe has seen first-hand how difficult Covid-19 has been on girls aged between eight and 18 years old. Retaining those numbers will be key to Clonakilty RFC’s progression between now and the end of their respective seasons.

‘We finish our (rugby) season next April and yes, it will be hard as the girls are involved in so many other sports,’ McCabe concluded.

‘We just hope we can keep them on and keep the positive club atmosphere going, that is probably the most important thing for us. Having somewhere the girls can come to and play and be supported to the best of their ability all the time. That is our ethos.

‘It is not all about winning until they get to U16 and U18; yes, it gets competitive then. Up until that stage it is more about keeping the girls engaged, keeping them active and letting them outside to have fun.

‘With Covid, they have had so much restricted that to be able to get them out on a pitch and playing with their friends is brilliant. We ran a tag summer series on Friday nights and people said it was like the Ahamilla Disco but on a rugby pitch. We had mixed teams of boys and girls playing together with barbecues afterwards. It was the first time the girls got to go out and socialise in quite a few months.

‘We just try to keep the atmosphere correct and the girls happy and safe while they are playing rugby. Hopefully, we will be able to retain them all and get even more to join.’