In control: Clonakilty's Donal Lyons is first to the ball in the county senior football championship round one loss to Newcestown. 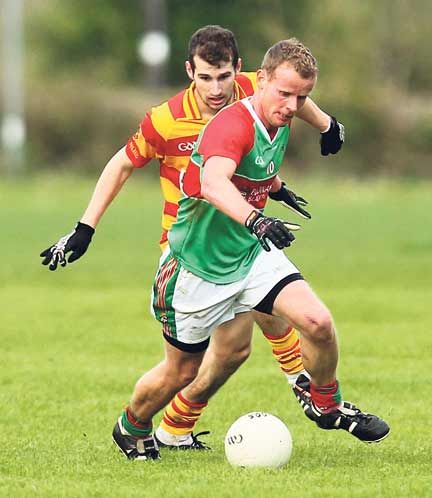 In control: Clonakilty’s Donal Lyons is first to the ball in the county senior football championship round one loss to Newcestown.

IF there’s any silver lining to take from Clonakilty’s current senior football championship plight, it’s that they still have their fate in their own hands.

Successive defeats to West Cork neighbours Newcestown (0-16 to 0-8) and O’Donovan Rossa (2-15 to 0-10) have left Clonakilty in a precarious position in round three – an unwanted first for one of the true bluebloods of club football in this county.

But while defeat to St Nick’s in Bandon this Saturday night would send Clon hurtling into a relegation final, victory would secure them passage through to the last 16 and the knock-out stages, alongside the winners of the round one and two ties.

Experienced campaigner Donal Lyons admits this is ‘unchartered territory’ for Clon, as he tried the answer the million dollar question – what’s gone wrong with Clonakilty this season?

‘We thought we were going okay but we haven’t been at championship pace in our first two games.

‘Things didn’t go our way in both games, we conceded early goals and we were very much behind before we even started. We conceded too much early on against two good teams and it left us with too much to do.’

Against Newcestown in round one, Clon trailed 0-7 to 0-1 after the first quarter, and they were 0-10 to 0-2 behind at the break. It didn’t get much better against Skibbereen, as they trailed 2-9 to 0-6 at half time, after conceding two goals in the first quarter. Poor starts are costing Clonakilty – that has to change, stresses Lyons.

‘We certainly want to start better on Saturday than we did in the last two games,’ he said.

‘We want to put our mark on the game early rather than let the other team do that first. A quick start is a necessity for us, but as well as that we need to be consistent and play well the whole way through.’

What’s new is certainly not wonderful for Clonakilty, but being in a relegation mire is not new territory for St Nick’s, who recently won relegation finals against Newmarket (2013) and Na Piarsaigh (2012) and beat Dohenys in round three in 2011. They know how to survive and scrap – they’ve fought for their survival regularly. Clon need to match that.

‘We’ve huge respect for Nick’s. We’ve had plenty of games against them over the years, and I was involved in a Clonakilty team that lost to Nick’s, I think it was 10 years ago. They’re a dogged team and we are very wary of them,’ Lyons commented.

Clonakilty need to up their intensity from the first whistle on Saturday night against a Nick’s team that lost to Douglas (2-9 to 1-7) and to Ilen Rovers in round two (1-19 to 1-11).

Nick’s were seen as the easiest draw that Clon could have got in the third round – Clyda Rovers and Aghada meet in the other game – but the biggest mistake the 2009 county champions could make now is take their eye off the ball. Their poor championship form so far means that Clon are where they deserve to be right now.

Clon, however, need more from their attack. Their defence has coughed up a huge 2-31 in two games, but their starting forwards managed just 0-10 combined against Newcestown (0-6) and Rossa (0-4) – that’s not good enough. Barry O’Mahony, a sub against Skibbereen, scored 0-5 (3f) when he came on.

The loss of Cork U21 Sean White, who’s gone to America for the summer, and the fitness doubts of Cork senior Thomas Clancy (ankle) is another concern for Clon, but they are hopeful the latter will line out. Clon U21 captain Martin Scally leaves for the States this Thursday (June 18th) while Jonathan Leahy has had a hamstring worry – but Clon still have enough about them to get their show back on the road this Saturday night.

‘We can start our summer afresh if we win on Saturday and then we can really express ourselves as the competition goes on, but we understand we are in for a battle on Saturday night,’ Lyons added.