DURING lockdown, Dripsey teenager Kayleigh Cole was a familiar figure running the back roads around her locality. With gyms closed, it was one source of exercise that helped her maintain fitness.

In her former years as a national school pupil, she played football and hurling in the annual Sciath na Scol competitions. For several years, too, she also indulged in hip-hop dancing. Now her moves and actions are on racetracks in Ireland and the United Kingdom.

Known better by Kayls, she explains how it all began.

‘I always had an interest in rallying and watched it from my dad’s shoulders, but I never thought that I would want to be behind the wheel of a car or a kart,’ Kayleigh explained.

But her Christmas present in 2016 was a game changer.

‘I had been begging him (her dad, Mike) for about two or three years for a go-kart, came downstairs on Christmas morning and there it was.’

Initially, she just wanted the kart for some fun on weekends. She didn’t think she wanted to compete, but following a spin at Kartworld in Watergrasshill a few weeks later, she was only going in one direction.

‘I absolutely loved it. I was out in the rain on slicks,’ she recalled. Certainly not the ideal platform but after those years in hip-hop, it brought a new meaning to freestyle.

For her first race in Junior Rotax, Kayleigh adopted the number 18 in memory of the former rally driver Donal O’Brien, who was tragically killed whilst out cycling.

‘My first race in Watergrasshill was with the Tullyallen Kart Club and I haven’t stopped since,’ she said.

The early races were to hone her racecraft and get accustomed to the various tracks. In 2018 she remained with the Tullyallen outfit and the Junior Rotax, finishing seventh or eighth in the series. It didn’t really matter that she was the only female on her grid. She laughed at the suggestion that she may have been a bit of a tomboy.

‘Not really, but maybe kind of. You make your stamp in the sport, but you should always be respectful,’ she said.

For the 2019 season, there was a change of chassis and a change of class to the Senior Rotax, and she began to come home with podium finishes in the Motorsport Ireland kart series. But as always, the fickleness of the sport illustrated that nothing is for certain.

‘In the “O” Plate in Watergrasshill, I was doing well and in the opening two heats I was in the top two each time,’ Kayleigh recalled but in the final a plug issue thwarted her efforts. It was heart-breaking after all the effort, though after the initial disappointment she said, ‘There are always ups and downs in motorsport but you always take home the positives.’

At home is her biggest support – her younger and twin sisters Myka and Courtney, and mum Sue and dad Mike, who is both chief mechanic and transport manager.

In the 2019 season, Kayleigh won the Munster and Tullyallen championships and was third in the All-Ireland. It was a really good year given her experience. 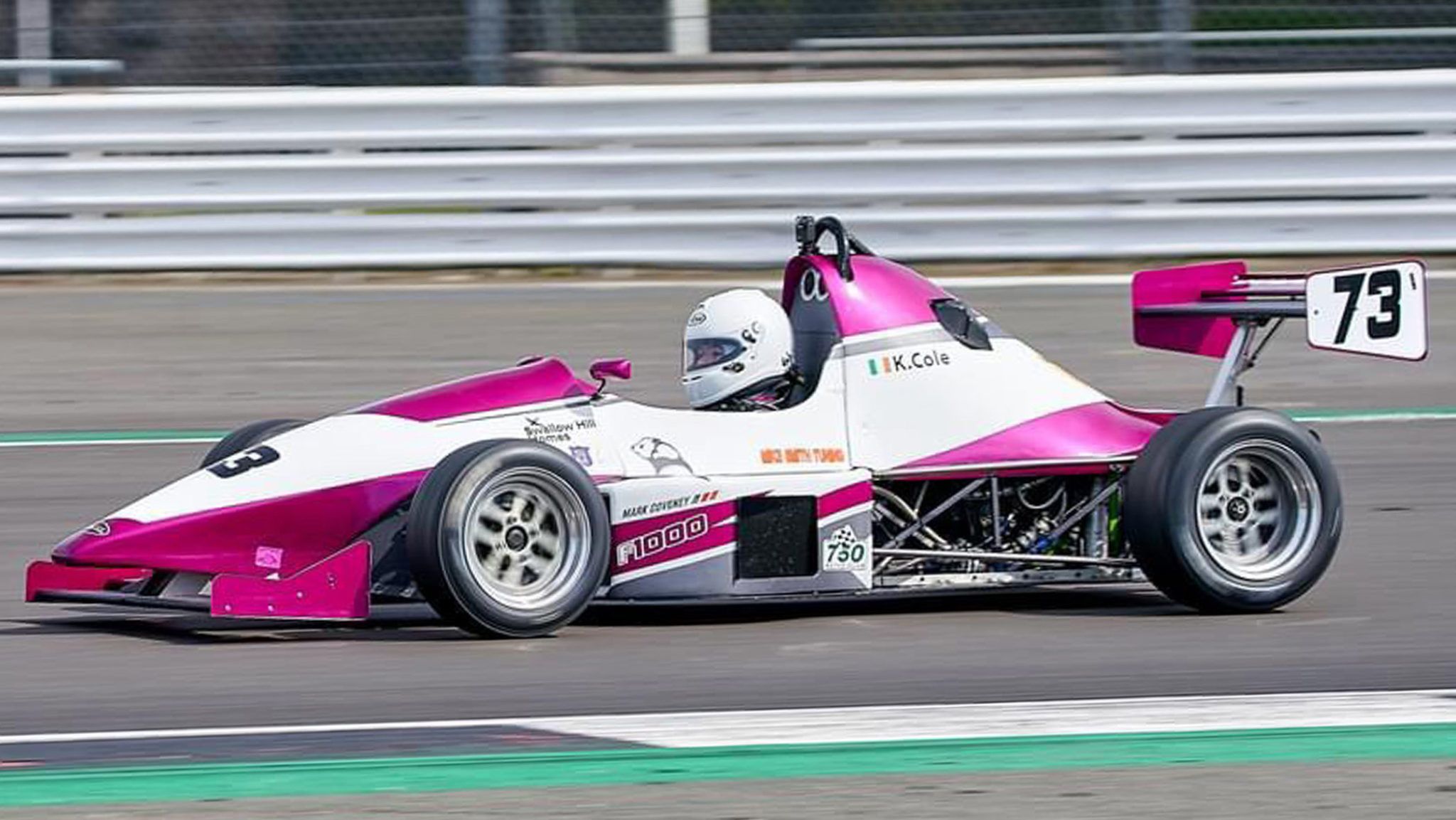 The arrival of Covid-19 in 2020 brought many obstacles, but the Cole determination saw Kayleigh competing in rounds of the British Championships at places like Warden Law (Sunderland) and Whilton Mill (Northampton). Obviously, she missed many events due to restrictions. The British trips also included racing at PFI (Paul Fletcher International, the largest outdoor karting track in the UK near Grantham).

‘In the PFI Autumn Cup I finished 16th out of 60 and there were two other girls in the entry. In the PFI Kartmasters (European event) I was 17th out of 40,’ Kayleigh said.

All the time the Dripsey teen was gaining great experience. At the start she was cautious, especially going into corners. Now, she’s not afraid to mix it with the opposition.

Even though she is planning to stay in karts this season, her main racing will be in the F1000 single seater series in the UK. Plans after karting are well afoot and she tested the F1000 car at Bruntingfort (old airfield) in Northampton, reaching speeds of 130mph. She certainly wasn’t fazed by the experience even though she was only a few centimetres off the ground at such high speed.

She had contemplated making her race debut in Ireland and had a test session in a Ginetta with the Morgan Dempsey Racing outfit. The fact that grids in the F1000 series are much bigger was another contributory factor.

Her single seater debut was in Silverstone where her dad Mike was, once again, her team boss and just about everything else as well. It also helps keep the budget as realistic as possible as running with a top team is really expensive.

‘At the moment I am looking for more sponsors but with Covid and how it has affected the business sector, it is hard, but if you don’t ask you don’t get,’ Kayleigh said.

In her debut race weekend at Silverstone she was named ‘Best Newcomer’ for the most progression in a single race weekend. She finished P17 in Race 1; P18 in Race 2 and P15 in Race 3. In the most recent event in Donnington Park, an electrical issue halted her progress.

The season ahead will be busy from both a sporting and academic perspective as she will be in her Leaving Certificate year in Ballincollig Community School next September. On her career she commented, ‘I didn’t think about it at the start but now I want to go places with a career in motorsport.’

In that respect, the W Series is her main aim. The W Series is described as a ground-breaking racing championship for women and was launched in 2018. Their ethos is direct: ‘We’re here to shake up the industry, push aside stereotypes and change the face of motorsport, quite literally. We firmly believe that women and men can race one another on equal terms provided they are given the same opportunity.’

‘This year is about learning the British tracks and I have Sarah Moore (W Series driver) as my driver coach. She is helping me a lot, she is based near York and comes to my races helping me with data, racing lines and all of that’ Kayleigh said.