Although camogie first saw the light of day in 1904, it was not until May 1912 that we read of its first introduction to West Cork.

CAMOGIE came into existence in Dublin in 1904. The word ‘camogie’ is the English version of the Irish word ‘camógaíocht’, which comes from the word ‘camóg’, meaning a small camán (hurley). The first camogie match was played between Keating’s branch of the Gaelic League and Cúchulainns, at a feis in Navan on July 17th, 1904.

Although camogie, or ladies hurling as it was often described in the early days, first saw the light of day in 1904, it was not until May 1912 that we read of its first introduction to West Cork.

Maybe that might suggest that the ladies of West Cork were less emancipated than their Dublin counterparts but, in reality, it was an era when women were not encouraged to take part in any kind of physical sports. However, a tide of Gaelic culture was sweeping across Ireland, as evidenced, in particular, by the growth of the Gaelic League and the holding of many feiseanna and aeridheactanna across rural Ireland. These feiseanna included not only cultural events but hurling games as well and it’s no surprise that the ladies wanted to get in on the physical activities as well as the cultural.

It is probably true to say, too, that most of the men involved in hurling in West Cork, introduced only seven years earlier, in 1905, to the area, were reluctant to get involved with women trying to play hurling and it took outsiders to bring the game to the region. We can see this from the introduction of camogie to Skibbereen in 1912.

The very first mention of camogie in West Cork comes in Bandon in 1912. The Bandon ladies were  stirring themselves and in early May they set up a ‘ladies hurling club’ (camogie club), the first practice session being held in the famous ‘Bogs,’ the GAA field on the banks of the Bandon, now occupied by a supermarket.

‘The evening was damp and the ‘going’ was not in the best of condition, but, nevertheless, the ladies appeared to enjoy the sport immensely.’

A good crowd of boys and young men watched the practice and were impressed with the ability of the girls, ‘and their dexterity in wielding the camáns.’

‘There were few ‘croppers’ and the first practice was a great success. Mr Thomas O’Shea, secretary of the local branch of the Gaelic League, deserves much credit for starting the Club.’

Apparently, the Bandon camogie club was set up in the little village of Kilpatrick, near the town. The greatest credit was due to the secretary, Hannah O’Mahony, and the captain, Annie Lyons. The club could field a team as sturdy and business-like as any in the city. 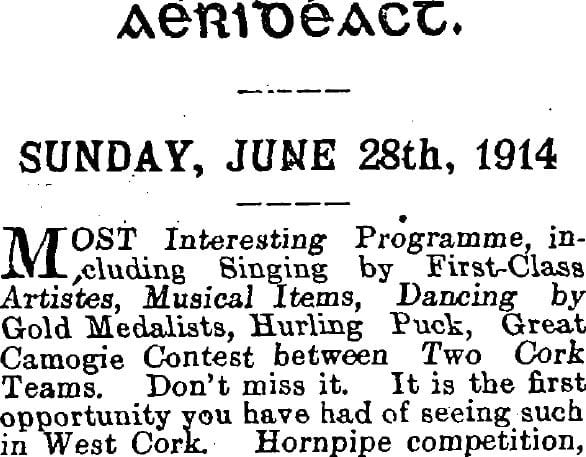 The first mention of a camogie match in West Cork was in 1914.

We hear no more of camogie in West Cork until that November when the game was introduced to Skibbereen. This time it was a ‘blow-in’ who introduced the gospel. Miss Cáit Ní Dhonachadha – staying at Keenan’s Hotel, Glandore – was the representative of the United Irish Women’s League. She intended staying in the area some time and, having promoted ‘Camógeacht’  in Dublin, Wexford and Cork, she was anxious to set up a camogie club in Skibbereen. The writer, Cum na Gaoithe, was totally in favour of setting up a camogie club for the young ladies, especially the middle or lower classes, who got little exercise in the fresh air.

‘I think Mr PJ Cullinane and Mr Jas O’Driscoll would be excellent organisers to get such work underway, and when the club has been formed the cailíní themselves could easily keep it going.’

A meeting of the ladies of the town was fixed for Monday, November 4th, in the Town Hall, to formally start a camogie team.

On November 16th, we read in the Skibbereen Eagle that: ‘The ladies have made great progress with their hurling club, and, I understand that at the meeting held this week it was decided to hold a practice on Wednesday next in the Town Park. A club has also been started in Castletownshend this week, so we hope in a very short time to see a match between these two teams.’ In all probability, it was also Cáit Ní Dhonachadha who introduced the game to Castletownshend.

Unfortunately, no more is written about the progress of both clubs or if they played any matches.

At that time Kinsale was taken as part of West Cork GAA and the first reported camogie match played in West/South Cork was in Kinsale on October 5th, 1913. A Gaelic carnival was held that day in Kinsale under the auspices of the South Parish (Cork) Branch of the Gaelic League and part of the events were camogie and hurling matches.

The camogie game was between Clan Emer and Clan na nGaedhal, two city teams. The first goal recorded was by Josie O’Sullivan of Clan Emer. All the players were referred to as ‘Miss.’ M. Dunlea responded with a goal for Clan na nGaedhal. Further goals for Clan Emer by D. Murphy, J. O’Sullivan and K. Cramer gave Emers a half-time lead of 5-1 to 1-0, with L. Stokes scoring the solitary point.

Daisy Murphy, who was ‘all over the field,’ opened the second-half scoring with a point, and more goals followed for Emers from Murphy and J. O’Sullivan (3), with Murphy getting another point. Gaedhals’ only reply was a goal from Madge Murray. Final score was Clan Emer 8-4, Clan na nGaedhal 2-0.

Clan Emer were again in action against another city team, Emmets (selected), at the Dunmanway Aeridheacht on June 28th, 1914. The Aeridheacht was held in a field near the Chapel Lake. It was the first camogie match ever seen in the district and was thoroughly enjoyed by the crowd who kept shouting encouragement to the players.

‘While the match was in progress many and varied were the expressions of opinion along the lines. Here was the interested follower of his club shouting to the player to mind her place; here was the delighted old Doheny footballer enjoying the rare sport to him of seeing girl knock girl or crack her with the camán in the shin in earnest; here also was the old grandmother with her grandchildren expressing her indignation at the conduct of the hussies. For my part I thoroughly enjoyed the display, for it is undoubtedly a very good exercise for ladies and a local club should be started in my opinion.’

In 1915 the young ladies of Timoleague had tried to start a camogie club, which had proved successful for a while until it fell through from want of proper organisation. However, in 1916 they had secured a very suitable field from Miss Griffin and practised camogie every fine evening. Their numbers were small but it was hoped many more would join.

‘Some members of the team are very clever players and we hope to see them engaged in a match with some other club early in the season.’