GOALS from substitutes Libby Coppinger and Katie Quirke helped Cork pull clear of Tipperary in the second half to claim victory in the opening Lidl National Football League Division 1 clash of the season at Páirc Uí Chaoimh.

Tipperary were only two point behind at the interval after goals from Marie Creedon – aided by a Cork deflection – and Roisin Daly kept them in touch, but a show of power from the Cork bench saw Ephie Fitzgerald’s side pull away.

Playing with the strong wind Cork opened the scoring after just 30 seconds when Ciara O'Sullivan pointed, while Aisling Moloney equalising from a free. 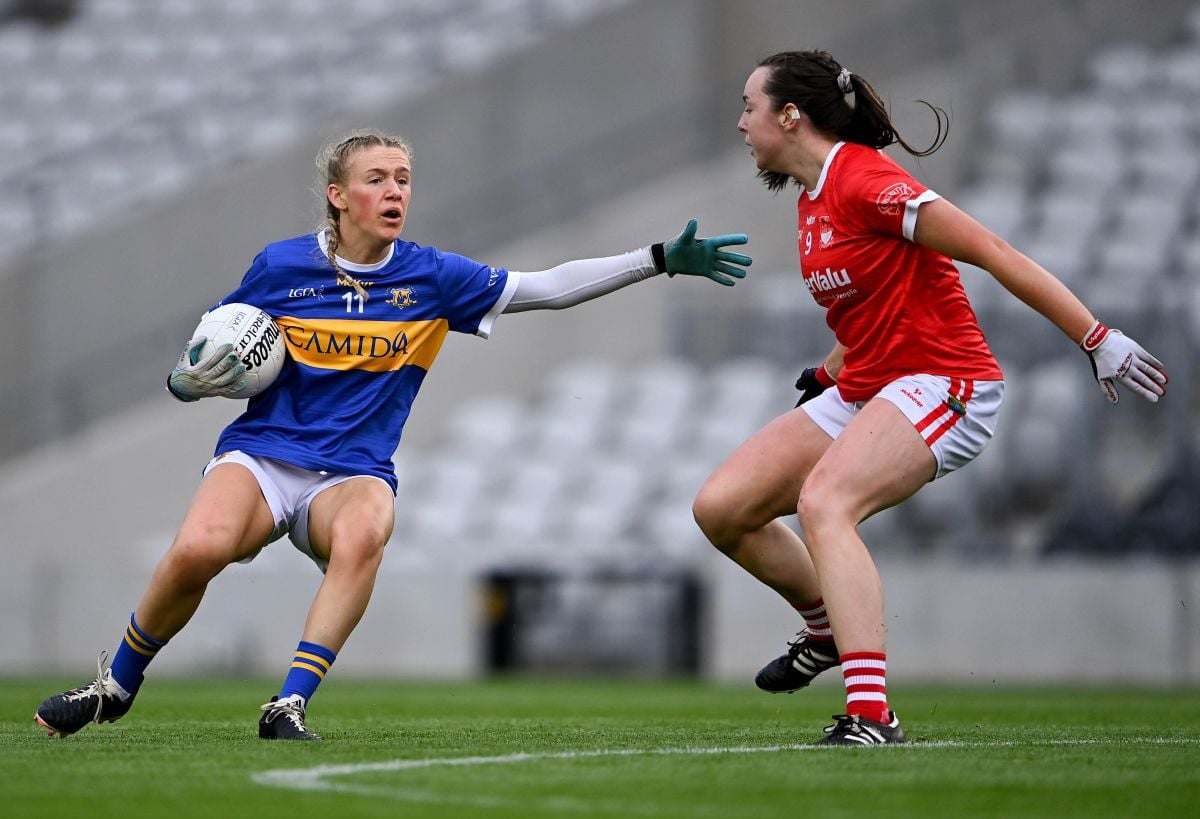 Emma Morrissey of Tipperary in action against Sarah Hayes of Cork during the Division 1B Round 1 match.
(Photo: Piaras Ó Mídheach/Sportsfile)

A great run from Erika O'Shea saw the sides level for the third time, before O'Leary reclaimed the lead for Cork. However, with 18 minutes gone a brilliant ball from Moloney set up Creedon for the opening goal of the game, which worked its way past Martina O’Brien off the boot of the unfortunate O’Shea.

Finn reduced the deficit before Cork went back in front after 20 minutes, when Brid O'Sullivan played O'Leary in to find the back of the net for a 1-5 to 1-3 lead.

Finn and Emma Cleary increased Cork's lead before Emma Morrissey slipped the ball to Daly for Tipperary's second goal, while Edith Carroll’s point meant Tipp only trailed by 1-9 to 2-4 at the break.

Three half-time substitutes by Cork showed how unhappy they were with their first-half performance with Coppinger, Meabh Cahalane and Orlagh Farmer all introduced, while Coppinger soon found the net to make it 2-10 to 2-4. Finn increased their lead, before Morrissey pulled a point back for Tipperary.

Cork's third goal came after 50 minutes when Quirke palmed her first touch to the net, and from the restart Coppinger regained possession to point.

Kiely increased Cork's lead before Aine Delaney was sin-binned, while Shauna Kelly was forced to leave the pitch injured.

With five minutes to go Ciara O'Sullivan got her third point of the game which proved to be the last score as Cork ran out deserving winners in the end.