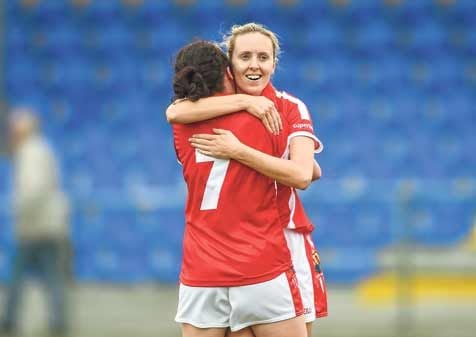 SHE may have exited stage left but Nollaig Cleary insists that there is no end in sight for the Cork ladies’ football juggernaut.

The Castlehaven woman confirmed exclusively to The Southern Star this week that she has retired from both county and club football after a tremendous career that saw her win all the game’s biggest prizes.

Cleary came on the inter-county scene in 2004 and her big break coincided with Eamonn Ryan’s appointment as manager and the start of Cork’s total dominance of ladies’ football as they have won an astonishing 28 trophies out of 34 in the 11 and a half seasons since.

Before 2004 Cork had never won a Munster senior ladies’ title, not to mind an All-Ireland.

Cleary has been involved in 25 of those triumphs, and while the 35-year-old feels the time is right to call it a day, she has predicted more silverware to find its way to Leeside this season and over the next few years.

‘Cork are the team to beat, absolutely,’ Cleary said.

‘The fact that Cork have won so much and are still winning so much, it’s taken for granted that Cork will go on and do well the following season. I have no doubt that Cork have the players, the dedication and the management to go all the way again this season.

‘The future is very bright for Cork ladies’ football. There are huge numbers of talented underage players coming through. It doesn’t happen by chance though because there’s a huge amount of hard work by everyone involved to make sure that Cork are competing for the big prizes every season.

‘There’s still a brilliant team there. I know that a few of the older guard have left over the last few years but there’s more than enough talent there to carry Cork ladies’ football forward.

‘Their performance in the league final was fantastic, especially the second day against Galway, because it showed that the hunger is still there. There’s a great mix of the older players and the younger players who are coming through now.’

A spectator at Cork’s recent league final triumph against the Tribeswomen, Cleary admits it was difficult to look on from the stands knowing that she wouldn’t be togging out with her teammates ever again.

‘At the league final it was hard to be sitting up in the stand and watching on. A part of me will always want to be out there playing,’ she said.

‘It’s fantastic to see so many new girls coming along and Cork still doing well. You come to the realisation that while you might want to be out there that you’re not the player you were a few years ago and that it’s time for other players to have their time and continue what was started over ten years ago.’

Looking back on her stellar career in the red jersey, Cleary recalls that basketball was her first sporting love – indeed, she has played basketball at the top level for years – before she took an interest in football while in college.

She followed her sister Eimear in lining out for Gabriel Rangers, and in 2003 the club won the All-Ireland junior final, beating Fingallians of Dublin, 1-22 to 0-8, in the final.

Cleary scored 0-8 from play the day, and had racked up ten goals in the previous three games en route to the decider.

Her form with Gabriels saw her get the call-up to Cork for the 2004 season, and she never looked back.

‘I was lucky enough that I got my break on the Cork team in ’04,’ she recalled.

‘2004 was the first year that Cork won a Munster final and it was fantastic to be part of that team that won that first Munster title. We didn’t think at that stage that we’d go on to be so successful and achieve what we did.

‘I feel really privileged to have worn the Cork jersey for so long and be part of such a successful Cork team.’

It’s like asking a parent to pick their favourite child, but what was the standout memory from Cleary’s 11 seasons with Cork?

‘The first All-Ireland win was special,’ she said, reflecting on the famous maiden win, against Galway in ’05.

‘It was such a huge occasion. Cork had never got to an All-Ireland ladies’ senior football final before and then to win the final was something that we never really felt was possible when we started out. It was a day I’ll never forget. While we have had lots of wonderful days since, it’s the first one that still means the most.’

Now she’s ready for the next chapter of her life, after football, but she’ll never forget the friends and memories that football has given her, and it’s a sentiment that Cork and ladies’ GAA would echo in recognition of one of its finest daughters.