Bandon's Kerry Desmond tries to get around Thomond's Colin Slater during their Munster Junior Cup semi-final.

The West Cork club won this competition for the first time in 2017, but they came up short at home in Old Chapel in their semi-final against Thomond last weekend.

Bandon led by one point at the interval, but the Limerick club bounced back from the concession of an Enda Phelan try early in the second period. In contrast to their opponents, Thomond’s ability to finish off crucial moves led to Darragh O’Neill (two) and Colin Slater tries that proved the difference at the end of a hugely entertaining semi-final.

‘It was a real battling performance and Bandon gave it everything,’ Bandon RFC President Richard Godsil reflected afterwards.

‘I thought we played very well in the second half against a strong wind. Thomond’s captain and winger, Darragh O’Neill, was particularly good and scored a brilliant try, to be fair to him, near the end. That broke us a bit.

‘Great pride in the way the boys played today and all season long. That’s only the third match we have lost all year.’

It took nine minutes for Bandon fly-half Ben Ridgeway to register the semi-final’s first score from a penalty. A solid scrum and committed defending were the foundations Thomond built their eventual victory on. The visitors utilised both to good effect throughout the opening half.

A quick tap-and-go penalty saw Aaron Rice slalom through his opposing defence after 18 minutes. Deep in Bandon territory, the Limerick side were awarded a penalty inside the 22. From the resulting scrum, Thomond patiently retained possession prior to Adam Guerin spinning a perfect pass to Colin Slater who touched down in the corner. Guerin converted and Thomond led 7-3.

The home side’s frustrations grew when Aaron Guerin scored another penalty to extend his team’s advantage, 10-3.

A pair of converted Ben Ridgeway penalties saw Bandon thunder back into contention however, and change ends one point down, 10-9, at the conclusion of a tight first half.

The second period proved a much more entertaining affair. Eleven phases of play preceded a superb move that ended with Bandon’s Enda Phelan getting over the try-line after 44 minutes. 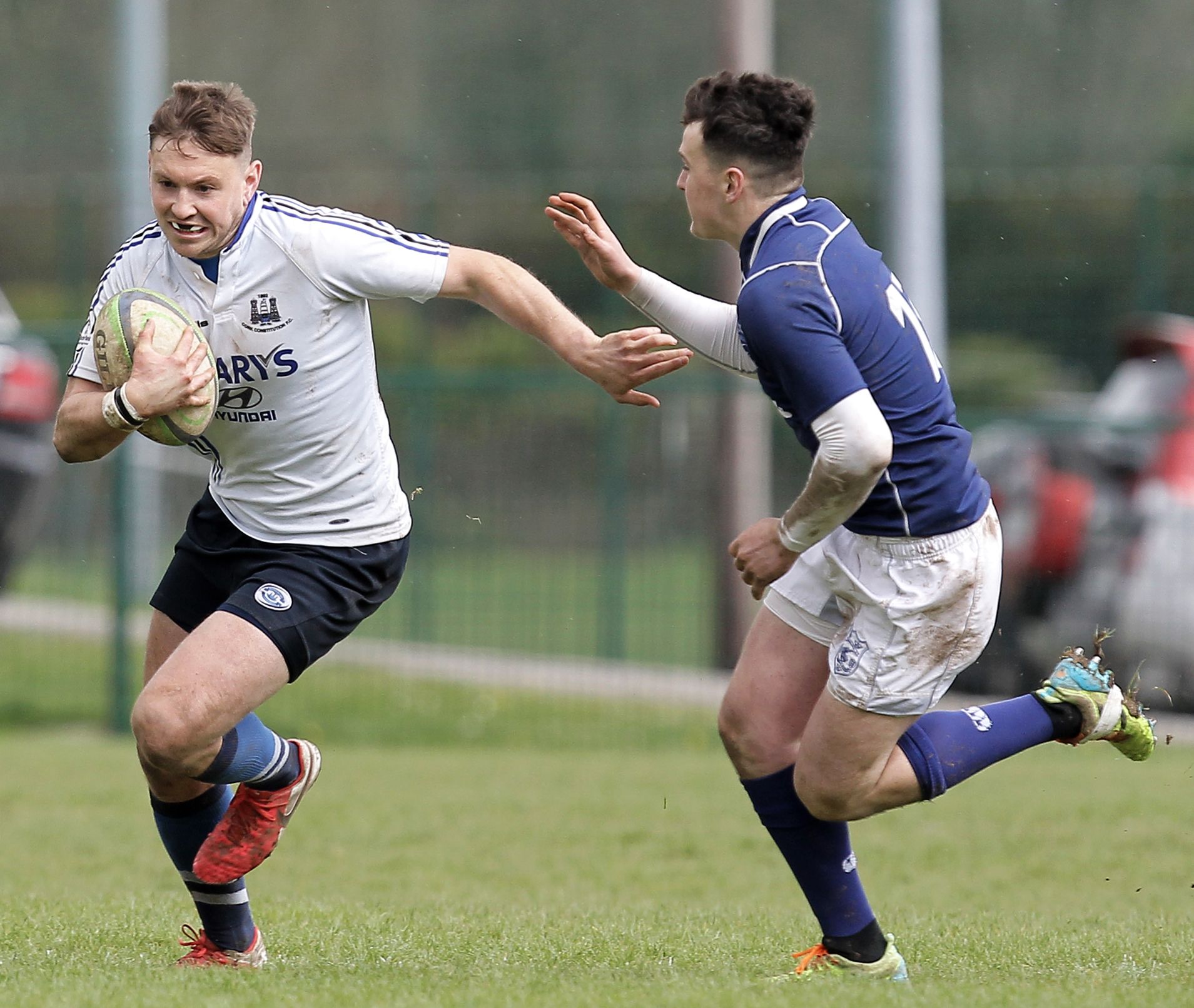 Thomond’s response was immediate with Aaron Guerin punishing a crossing indiscretion with a wind-assisted penalty from just inside the Bandon half. Ben Ridgeway did likewise from a penalty to hand Bandon a 19-13 lead heading into the closing stages.

A cracking semi-final’s standout moment occurred after 65 minutes. As weather conditions deteriorated, Thomond kept the ball, moved possession from the right to the left wing where Eoghan Sherlock burst clear. A sublime pass released Darragh O’Neill. The flying winger kicked ahead, sprinted forward and touched down. Guerin converted and Thomond was back in front, 20-19.

Bandon reached their opponent’s 22 on two additional occasions but, once again, failed to come away with any scores.

Instead, it was left to Thomond captain and winger Darragh O’Neill to finish off another swift move – including vociferous protests of a forward pass in the build-up by the home team and supporters – for his second and match-clinching try five minutes from the end. 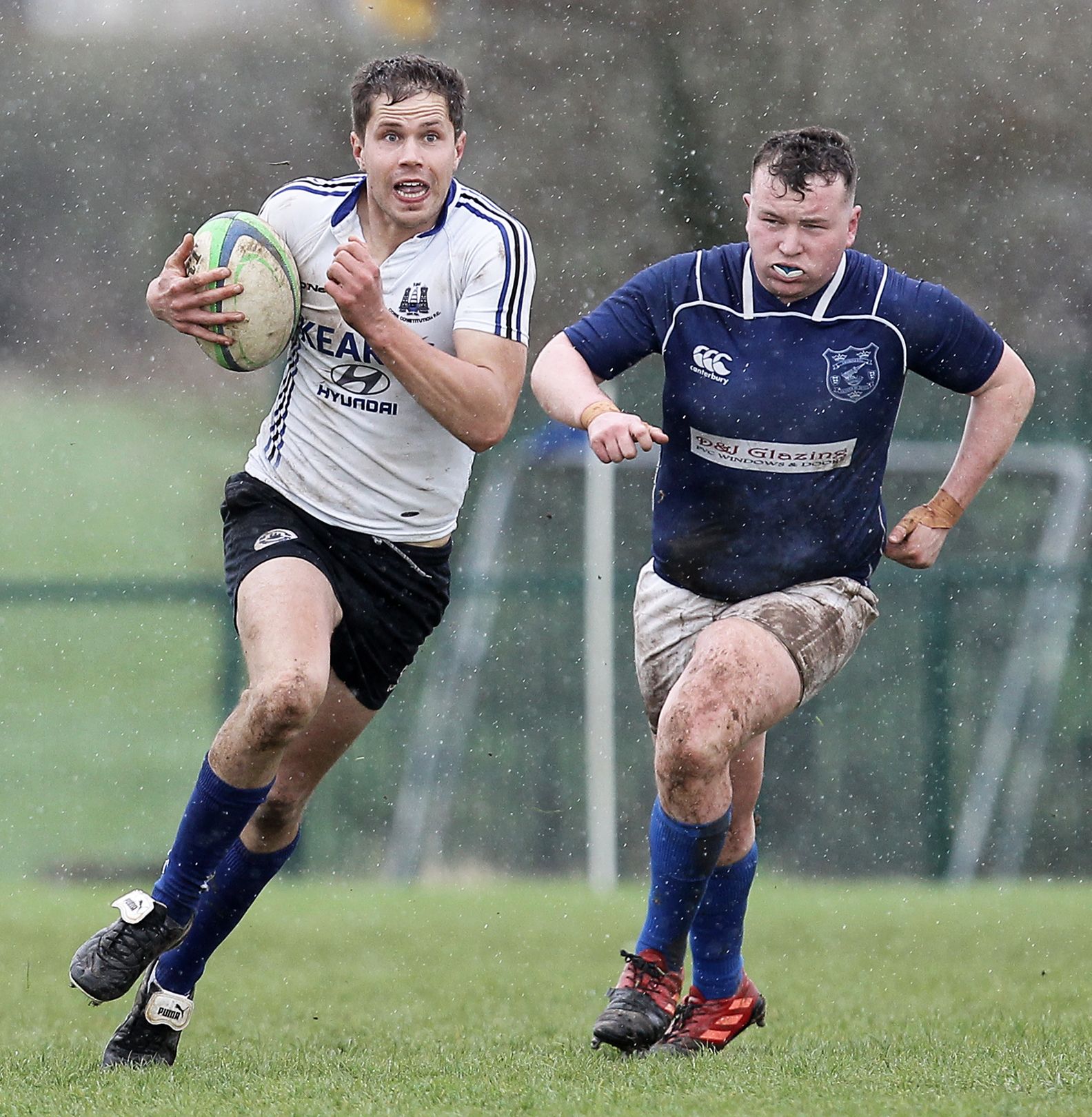 Guerin’s conversion brought the curtain down on a memorable day for the Limerick club and a disappointing end to a season that promised so much for Bandon RFC.

‘Bandon RFC has made great progress both on and off the pitch after the last few years when there has been little or no (on-field) action at all,’ Richard Godsil said.

‘To come back as strong as we have is fantastic. Remember, Bandon only lost this year’s league by a single bonus point which was very frustrating. We beat Cork Constitution, Garryowen and Kilfeacle, all the hardest teams, in this year’s Munster Junior Cup too. This is a young Bandon team that will come again. There is a lot to build on for next year and beyond.’