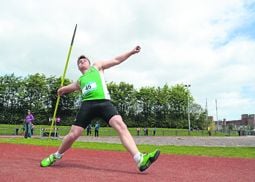 ON a day which saw 15 records broken at the GloHealth Munster Schools’ Track and Field Championships at CIT, no doubt one of the performances of the meeting was the senior 400m run of Scott Gibson from Bandon Grammar School.

Not alone did Scott erase the previous mark of 48.3 which has stood to Tomas Coman of Thurles CBS since 1998, but his brilliant 47.60 clocking also gave him the B standard for this summer’s European junior championships.

Getting off to a perfect start, Gibson held his form into the home straight to power across the line almost three seconds clear of Stephen Walsh of St Declan’s, Kilmacthomas, the winner of the 200m.

‘I’m delighted with that. I’ve been lacking a good start throughout the year so it’s great to get it right today,’ said the 17-year-old who earlier in the afternoon had also won the 100m title in a personal best of 11.03.

Joey Henchy of Bandon Grammar took the bronze in that race, along with silver in the 200m, and later afternoon they both contributed to the school’s record-breaking winning performance in the 4 x 100m relay of 43.11.

Solo victories were recorded by Darragh McElhiney (Coláiste Pobail, Bantry) in the junior 1,500m which he won in a personal best of 4:21.63 and by Caoimhe Harrington from the same school in the intermediate girls’ 3,000m.

Another impressive winner was Conor O’Driscoll from Carrigaline Community School who front-ran his way to a 1:56.89 victory in the intermediate 800m, finishing all of 40 metres clear of the runner-up while Gary O’Sullivan (De La Salle, Macroom) took the senior 800 metres title.

One of the best races of the day came in the senior 1,500m where Luke Horgan of Coláiste Chriost Rí edged out Sean Curran (Dungarvan CBS), Barry Keane (St Declans) and Billy Cronin (Millstreet CS) with less than a second covering all four.

One of the most unusual doubles came in the intermediate girls where Laura Nicholson from Bandon Grammar School won both the 1,500m steeplechase and the high jump.

Louise Shanahan (Bruce College) used her finishing speed to good advantage to take her expected double in the senior 800m and 1,500m with Rhona Pierce (St Angela’s) taking silver in the longer event.