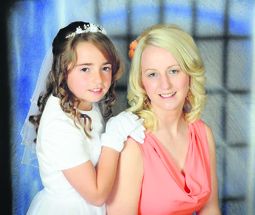 Alisha said of Zoe: ‘My Zozo and I were inseperable’

THE heartbroken mother of the eight-year-old girl killed near Rosscarbery last year has said she would like to meet the local people who supported the family in their tragedy.

Alisha Scannell, whose daughter Zoe was killed by the dangerous driving of an unaccompanied learner driver last year, is organising a charity event in memory of her daughter, in Abbeyfeale, Co Limerick, on May 16.

‘I have received sincere and genuine support from people in the Rosscarbery area, and would love to meet some of these people at Zoe’s weekend,’ Alisha said this week.

The event, a benefit dance, is being run at Fr Casey’s GAA club and will be in aid of two charities chosen by Alisha – the Bru Columbanus accommodation for seriously ill patients of Cork hospitals and hospices. The second charity to benefit will be FirstLight, which offers support and information, and promotes research into the sudden, unexpected, death of a child.

‘The charities that we have chosen to support are very worthy causes that supported Alisha and her family in their time of need, and we would very much appreciate your support in helping us to raise funds for these organisations,’ Alisha added.

Last week, Ms Scannell wished the young driver, whose case came before Cork Circuit Criminal Court, a long life lived to the fullest with her beautiful daughter watching over him.

Judge Seán Ó Donnabháin imposed a two-year suspended jail sentence on Lawlor O’Donovan, who is now 18 and studying for his Leaving Cert. He pleaded guilty to a charge of dangerous driving, causing death. He was also banned from driving for six years.

Garda Brendan Cahill said the eye witness evidence was that there was no excessive speed but that the teenager’s car went out of control and travelled broadside across to the incorrect side colliding with the car in which Alisha Scannell and her daughter were passengers. Zoe died instantly.

‘He may have become distracted, attempted to correct it but over-corrected and caused the car to go out of control and it crossed on to its incorrect side,’ Garda Cahill said.

Alice Fawsett, defence senior counsel, said the defendant wanted for a long time to express his apologies in person to Ms Scannell and her family. He did so by arrangement with the gardai before the sentencing hearing.

He wept and was visibly upset during Ms Scannell’s victim impact evidence and elsewhere during the hearing.

Judge Ó Donnabháin said the young driver’s remorse, not for himself, but for the victim and her family, was genuine.

Referring to how the accident happened the judge said: ‘This is why an inexperienced driver is required to have someone with a sounder head with them when driving.’

Alisha Scannell said: ‘Zoe’s pictures, trophies and awards are all I have left of my special girl. All memories of how fulfilled my life was by one person and that is all I have now, memories, which a lot of the time are too painful to think about as it just reminds me of all I have lost.

‘Zoe was bursting with energy for life. Taking it easy was not in her vocabulary and I often wonder deep down did she know she only had a short life to cram everything into.

‘My Zozo and I were inseparable. We cuddled up in bed together every night while she got me to scratch her back or massage her feet. We’d snuggle on the couch watching TV, of course it always had to be her programmes. I’d go for a walk and she would have to come with me on her bike. We loved going shopping together and spent hours of time and money in the children’s section in Penney’s. She was my best friend and I was hers. Once we had each other nothing else mattered. We were the other half that made each other complete.

“She loved playing camogie, she’d get a slap of a hurley, shake it off and start laughing. Playing soccer she’d slip in the mud, jump straight back up and dive in for the next tackle, still smiling and laughing.

‘Our life without Zoe now is empty. I don’t like falling asleep at night without her beside me. I hate waking up in the morning to the eerily quiet house. Anything that gives us a moment of joy now is clouded by the loss of our sweet angel. I have thought about suicide many times, so many it scares me. I eat only because I have to to survive but food is tasteless now. I feel angry, confused, sad, betrayed, guilty and afraid, the list is endless. I also have guilt for surviving while Zoe’s life was ended so abruptly.

‘I’ve been robbed of a future. More importantly, so has Zoe. Her dreams of becoming a teacher or hairdresser like me are gone. Her plans to be a mommy, gone. She had her future planned out and in the blink of an eye it was snapped away from her.’

Towards the end of the sentencing, Judge Ó Donnabháin said to the deceased’s mother: ‘Zoe would not want you to remain hurt.’

For more information on Alisha’s events in memory of Zoe, see rememberingzoe.com.