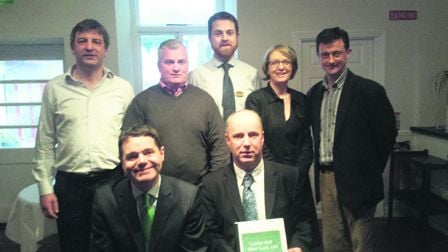 The aim of the meeting was to highlight the urgent need for a cohesive, adequately funded marketing strategy to actively promote the entire West Cork tourism experience domestically and internationally.

The group shared with the Minister news on how West Cork tourism stakeholders are working together to take full advantage of the region’s position as the starting point of the Wild Atlantic Way.

As Minister Donohoe had launched the government’s new tourism policy, ‘People, Place and Policy – Growing Tourism to 2025’ earlier in the week, the group pointed out that their aims were clearly aligned with the long-term goals of government policy.

Minister Donohoe said he saw the value of setting up such a tourism body to gain full advantage from the tourism initiatives being developed by Fáilte Ireland. While the Minister admitted that the job of ‘promoting the entire area as a brand abroad could be done so much better’, he identified the clear potential for West Cork to flourish when its offer is aligned with Fáilte Ireland’s key initiatives for Cork and Ireland more generally.

A spokesperson for Tourism West Cork said it saw the Minister’s pledge of support as a vote of confidence in its work.

Group chairman Finbarr Harrington said: ‘We are very pleased with what the Minister said. He recognised the potentially crucial role West Cork can play, due to its position at the start of the Wild Atlantic Way, as a hinge between the WAW and the new South East tourism initiative, and as a support for Cork Airport. He also saw that West Cork has under promoted itself and that our group is well positioned to help solve this problem.’ He added that the group now looked forward to working with the Minister ‘as part of his strategy’.