Sinead's students held their own ‘referendum' in Luxembourg 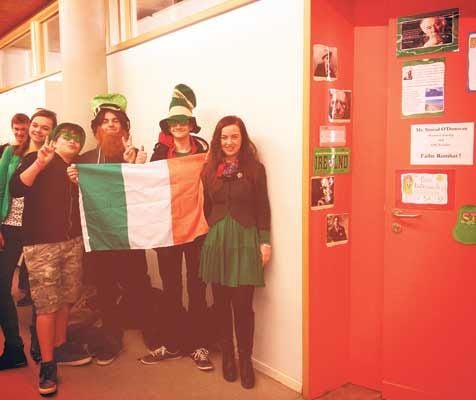 Sinead’s students held their own ‘referendum’ in Luxembourg.

A WEST Cork teacher working in Luxembourg, who couldn’t get home to vote, decided to hold a ‘classroom ballot’ on the recent Marriage Equality Referendum.

Sinéad O’Donovan from Newcestown was seconded to the European Schools in Luxembourg four years ago. She teaches Irish and English as a second language there.

‘As part of my lessons, we often look at current affairs and news items, and it seemed fitting that, as an Irish person teaching students of so many nationalities, I should inform them about this historic event taking place in Ireland,’ Sinéad told The Southern Star.

‘Initially, some of the students were surprised that people were being asked to vote on this issue at all, as they come from countries that have legislated for marriage equality without holding referenda. In Luxembourg, gay marriage was legislated for last year, and two weeks ago Prime Minister Xavier Bettel married his long-term partner Gauthier Destenay.’

Sinead wanted to give the students an understanding of how referendums are held and the issues involved with this particular one.

‘We watched videos promoting both sides of the debate and, as the facilitator, I kept my own personal opinion to myself.’

‘As I opened one of them it said, “yes, because I am”,’ said Sinéad. ‘I sincerely hoped that voters would consider the many young people in classrooms all over Ireland struggling to come to terms with their sexuality, as they cast their ballots.’

As an educator, Sinéad feels it is vital that students all feel equal and valued in school and was disappointed to read about the ‘Teachers For No’ group demonstrating outside Leinster House prior to the referendum.

‘I feel that it’s important that all young people feel equal in school and that it’s ok to be different. And the Yes result will now really change forever what it means to grow up as a gay person in Ireland.’

So how did the students from nine different EU states from the European School of Luxembourg vote on May 22nd?

‘Our final result was 89% Yes with 11% voting No. Students see things quite clearly. To them things are either fair or unfair, equal or unequal.’