Wayne and his award-winning design 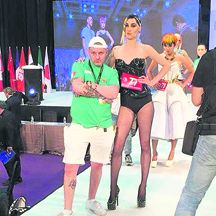 Wayne Lloyd and his model sporting the winning style.

Competing as part of the Irish hairdressing team, Wayne, who has salons in Ballydehob, Bandon and Washington St in Cork, scooped a gold medal in the progressive Full Fashion category.

The contest requires that the model must reflect the standard of a magazine front cover, judged on cut, colour, clothes and make-up, Full Fashion is the most sought after award of the competition.

Also competing in the Irish team, Bridget Haren from Ennis got a gold in Progressive Cut and Colour, and Sean Taaffe from Killarney took the bronze in Full Fashion.

Florin Ghille from Dublin was placed fourth and fifth in his categories. Overall, it was a great result for Irish hairdressing, as 24 countries competed in Malaysia.

Wayne and his team continue to be awarded for their competitive efforts, winning over 200 medals and trophies in the last seven years since their first salon opened its doors in Ballydehob. Next stop – the World Championships next March in Seoul.Korea.