Regulars in Charlie’s pub in Timoleague back at the bar this week after most Covid-19 restrictions were relaxed last weekend while. (Photos: Andy Gibson)

WHILE the big re-opening announcement caught businesses by surprise last weekend, bars and restaurants across West Cork reported a brisk trade over the weekend, with many glad to have finally turned a corner after two agonisingly long years.

Shane Spillane, owner of O’Connor’s Café and Seafood Restaurant in Bantry, told The Southern Star that it was ‘mental’ busy at the weekend and described it as like being ‘in the middle of summer.’

‘We went from zero to 100 in the space of two days and Saturday night was booked out solid. Sunday night was equally busy and it was just great for both us and our customers,’ said Shane.

Shane said the ‘positivity and optimism’ radiating from customers was unbelievable. 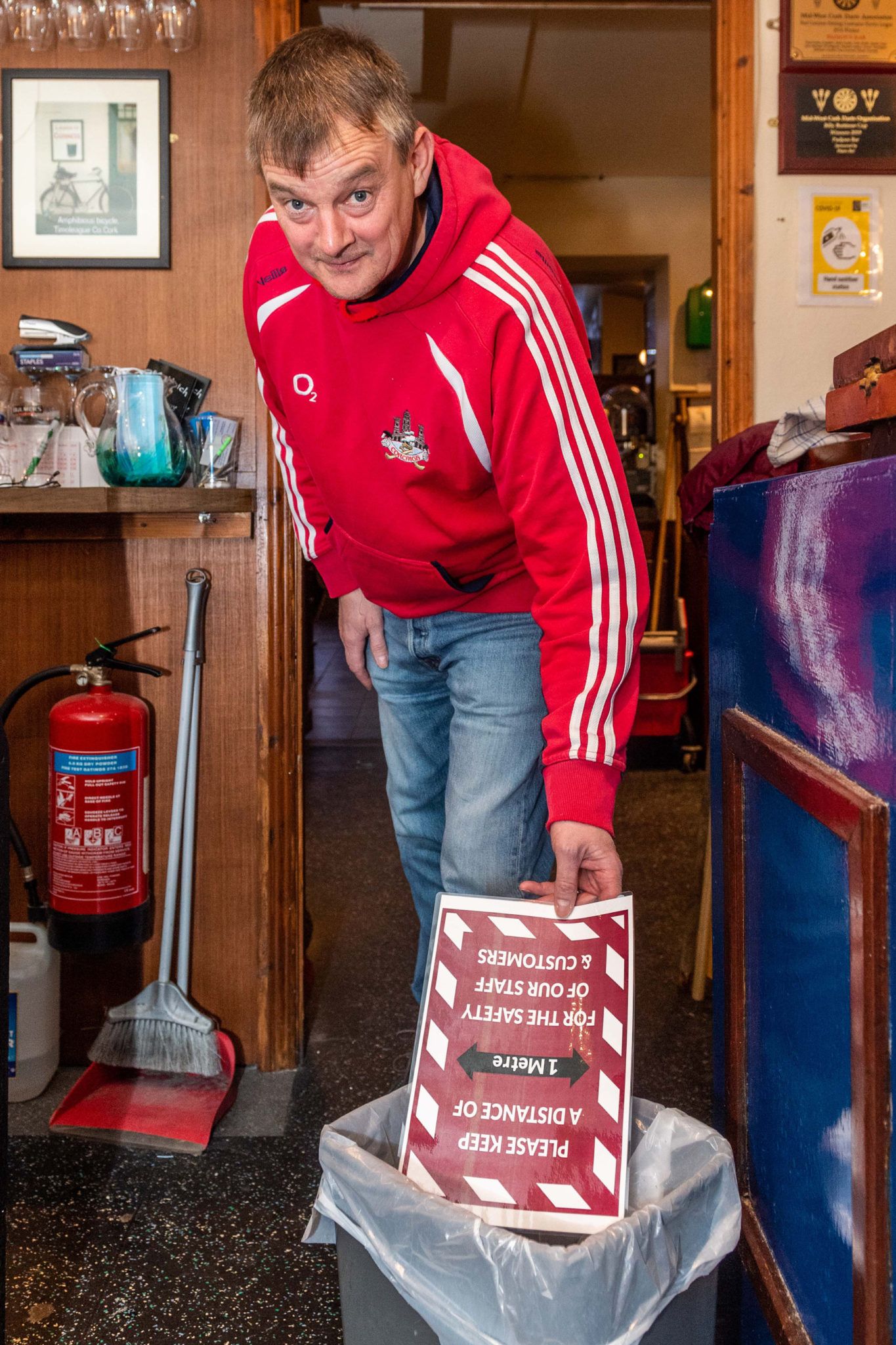 Conor Harrington of Padjoes bar in Timoleague, happily disposing of one of his social distancing signs. (Photo: Andy Gibson)

‘We’re turning a corner for sure, but obviously there’s an air of caution from some people and that’s good, too, and they can take it at their own pace.’

In Castletownbere, Adrienne MacCarthy of MacCarthy’s Bar said she was thrilled with the re-opening and glad to see all her customers back.

‘It was strange to see people once again sitting at the bar counter and last Saturday was a special day as it was such a shock – we didn’t expect it. It felt like the first day of summer,’ said Adrienne.

‘It’s now just so easy and we don’t have to take details of people and watch that they have masks on.

‘It was wonderful, with everyone in top form and I want to thank all our customers for sticking with us over the past two years.’

James Casey of Casey’s Bar in Clonakilty said it was ‘brilliant’ last Saturday as he had a band and DJ and he’s now more prepared for this weekend, too.

‘We reached capacity early enough on Saturday, so we controlled the door to make sure it was safe inside. I was afraid how it would go and some of my staff have never been in a bar in a normal setting with a band and DJ, which is strange,’ said James, who added that they will be bringing their much-loved bingo back to the bar next month.

Meanwhile, Don O’Sullivan of the Munster Arms Hotel in Bandon is hoping for a big turnout at The Hub nightclub when he opens again this Saturday night.

‘It’s really positive news for the late night industry and it did take us all by surprise, but we are looking forward to welcoming our customers again,’ said Don.

Supt Ger O’Mahony of Clonakilty Garda Station said that it was a relatively quiet weekend in Clonakilty, Dunmanway and Skibbereen.

‘Those out socialising were generally very well behaved, but we did have a minor assault that took place in Skibbereen on Saturday night,’ said Supt O’Mahony.

Garda Supt Brendan Fogarty, based in Bandon, said that the town was also quiet over the weekend.