A 101-YEAR-old nun from West Cork survived Covid-19 and was able to sit up in bed and read aloud a letter from the president.

Sr Maura Cullinane from Gearagh in Kealkil celebrated her birthday on March 20th at Highfield Healthcare in Dublin.

Just weeks before, there were fears that her positive Covid-19 diagnosis might be insurmountable. Although she was ill, and off her food for the best part of a month, Maura rallied, and is now as strong as ever.

Legend has it that after getting a dressing down from her dad for talking to a boy at a social engagement, she came downstairs the morning after and announced she was going to join the Sisters of Mercy.

It might be just a tall tale but then again in a video of her 100th birthday, last year, Maura gleefully announced that she chose the life she lived, and loved every minute of it!

Maura is the third in a family of eight and the last of her siblings alive. She had three careers with the order that is now known as the Daughters of Charity.

At the age of 18, she joined the nuns on December 1st 1938. She went on to teach in Blackrock in Dublin, as well as Rosewell in Scotland, before relocating to Paris, where she trained as a nurse.

She returned to work in the UK and Scotland, where she is reported to have picked up the driving habit. Her niece in Kealkil, Mary McCarthy, confirmed to The Southern Star, that she was known as ‘the flying nun because of her love of speeding.’

Mary said: ‘She had the attitude that God was looking after her all the time, but people were scared to meet her on the roads in West Cork.’

About 35 years ago, Maura went to Fairview in Dublin, where she got to know Bertie Ahern’s dad who was the gardener there, and, for a time, she looked after the writer Tim Pat Coogan.

Mary said: ‘She used to look after people with Alzheimer’s and now she has it herself. But she is good. Sometimes she will know everyone in a photograph and all the old stories, but sometimes she repeats herself.’ 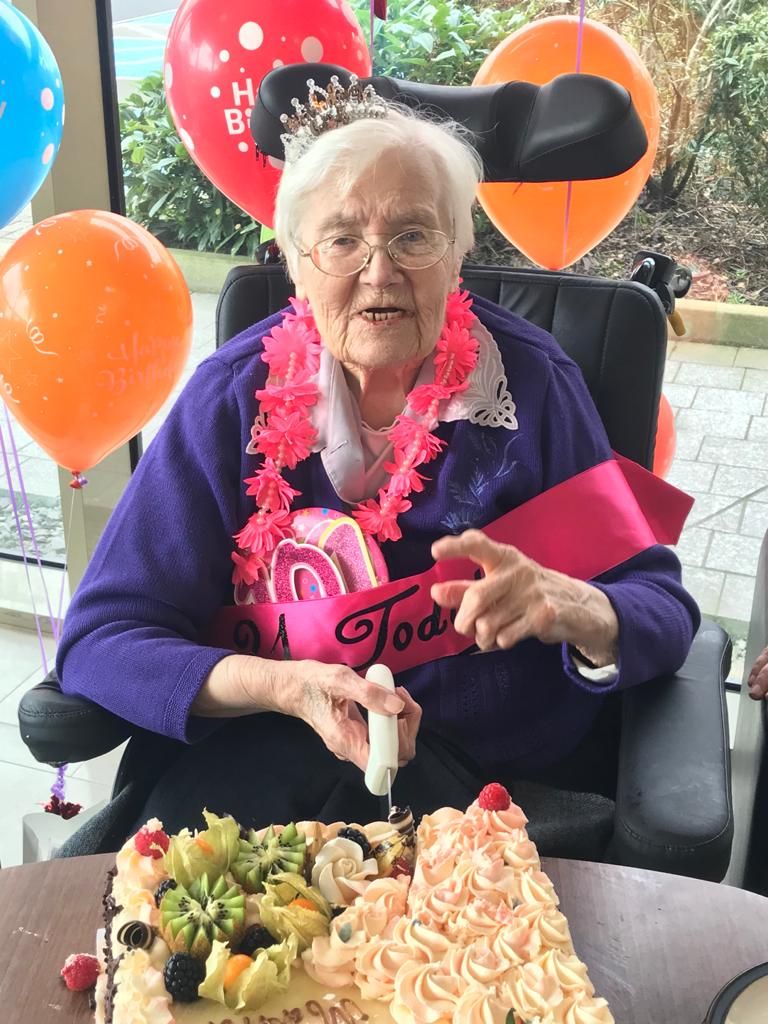 Sr Maura on the occasion of her 101st birthday.

Maura’s third career was to train as an occupational therapist, and she subsequently worked in Mountmellick and Kylemore West.

When she was diagnosed with Alzheimer’s she relocated from the home of the order at St Catherine’s to Highfield. She has been there since 2013, but still has an indomitable spirit.

When asked what she loved about her life, she said it was the sense that she was ‘as free as a bird.’

Mary said: ‘She loved travelling, was always great company, and enjoyed a drop of port. She loved a song and a party, loved meeting people, and going into the shops in Dublin, but she was not a materialistic person.’

A funny thing happened as Maura read the letter from the president, she called him ‘Michael O’Higgins.’ She read it wrong, but then there was an error by the president, too. He mistakenly called her Mary.

Her niece said: ‘There was never a minute with Maura when there wasn’t something going on. She was always making connections with people and looking after them in whatever way she could. And she knew how to have fun.’

When a care assistant asked her for life advice, Maura said: ‘Enjoy anything the Lord sends you. Take it and enjoy it, and everything will be grand.’

Julian of Norwich could not have said it better herself!