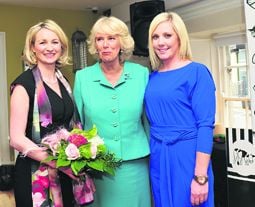 WHEN Camilla, the Duchess of Cornwall, visited Galway earlier this week, a West Cork woman was one of the first people to extend her a warm welcome.

Aislinn O’Driscoll, originally from Schull, is the assistant general manager at the boutique House Hotel on Merchant’s Road in the city.

The hotel held a special ‘Taste of the Wild Atlantic Way Food Festival’ in honour of the Duchess, on Tuesday.

Camilla was even served a special cocktail called ‘The Duchess’ which was a mixture of Mumm champagne, Irish Dingle gin and elderflower liqueur, which she tasted and said it was delicious.

Aislinn said they only got confirmation last week that the Duchess would be coming to the hotel and before it was confirmed, there were security checks and all the staff were interrogated by security officials.

Aislinn said it was a pleasure to meet the Duchess and that she was still on a high after such a memorable day.

The Duchess even broke protocol to shake hands with local school children who waited to see her.