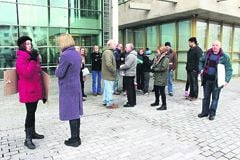 OVER 250 objections to a planned wind farm in West Cork have been lodged with Cork County Council.

Many of the objections to the proposal to build six turbines on a site at Barnadivane, near Terelton, were handed in following a protest at County Hall on Monday.

A small group of protestors from the Barna Wind Action Group, carrying placards, gathered at the County Council HQ and later handed in the objections, before the February 2 deadline expired.

According to the organisers, while the crowd was modest, many were unable to come due to the snowfall in West Cork that morning. TG4 interviewed Marie O’Sullivan about her opposition to the plan, as she has lived beside wind turbines for several years. She also commented on issues affecting farming in such a location, and the effects that a wind farm has on livestock. After the protest, the group presented a petition to their solicitor which will form part of their formal submission. The petition contains 300 local signatures.