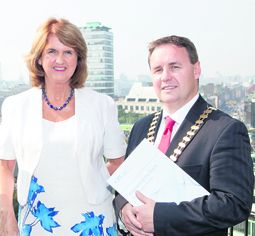 Tanaiste Joan Bruton was one of the people who Cormac Fitzgerald addressed during his term as CPA president. (Photo: Chris Bellew/Fennell Photography)

THE outgoing president of the Certified Public Accountants, Kinsale-based Cormac Fitzgerald, addressed a number of issues when he made his final address to the CPA recently.

Mr Fitzgerald said he had a ‘personal passion’ for advising SME owners and entrepreneurs, and was honoured to be in a position to articulate CPA Ireland’s policy positions in the past year.

‘Much of our focus was on supporting indigenous Irish business to stabilise, gain access to finance and working capital, grow and, hopefully, reach export status,’ he said.

As CPA Ireland President, Mr Fitzgerald said he was able to position policy positions directly to An Taoiseach, An Tánaiste, the Minister for Finance and the Minister for Agriculture, Food and Fisheries. ‘I also represented CPA Ireland at meetings with the Department of Finance, the Strategic Banking Corporation of Ireland and a range of other stakeholders,’ he noted, adding: ‘I believe that CPA Ireland has positioned itself as the “go to” body for policy opinion on issues affecting indigenous business, and our status was certainly enhanced by the launch of our report entitled: “Weathering the Storm – SME Lessons from the Crisis”.’

Mr Fitzgerald said he had the good fortune to represent CPA Ireland at both the World Congress of Accountants and at the general assembly of the European body – FEE.

‘I felt proud to hear so many international representatives refer to Weathering the Storm and to CPA Ireland’s unique position on the provision of direct information support to SMEs,’ he said.

He added that some of his personal highlights as president included overseeing an 11% increase in new student registrations. ‘Innovation is at the very core of CPA Ireland and we excelled to conceive, develop and deliver a world class online learning programme in International Public Sector Standards (IPSAS) in 2014. The launch of Weathering the Storm by An Tánaiste and its subsequent high level of acceptance as a quality report gave me great pride,’ he added.

‘Hosting the 10thAnnual Business Lecture in Cork in the premises of Dell Software International was another great milestone. I cannot possibly forget the honour of hosting a CPA Ireland Council meeting and a formal dinner for our colleagues from Nigeria in Kinsale.’

Mr Fitzgerald thanked his family, vice-presidents, Council colleagues, work colleagues and friends. He will remain as a council member with CPA Ireland and work as a consultant to a number of leading entrepreneurs and SMEs with his CPA advisory firm, Fitzgerald & Partners.