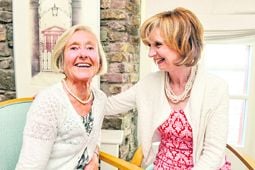 Pam Morris shares a joke with Adi Roche from the Chernobyl Childrens Foundation at the Bulman in Kinsale after she presented the charity with a cheque for €10,000. (Photo: John Allen)

A 70-year-old woman from Kinsale is showing others of her age that it’s never too late to get out and cycle 2,500km to raise funds for charity.

Pam Norris has been living in Kinsale for over 50 years, but is originally from Yorkshire. She is currently in the middle of cycling 2,500km along the Atlantic coast to raise much-needed funds for Adi Roche’s Chernobyl Children International.

While celebrating her birthday at the Bulman in Kinsale recently, Pam handed over a cheque for €10,000 to Adi Roche – the proceeds of donations and sponsorship that she has already collected since she began cycling at the end of April. Under the moniker ‘Cycling for Baby Hearts’, Pam is hoping to raise over €100,000 to save the lives of 100 babies in Chernobyl, through the charity’s Baby Heart programme. She is undertaking the cycle in sections of 300km each, and aims to complete each section in less than a week.

‘We try to look out for good weather and then do as much as we can, and come home for a break. I’m undertaking this to support Adi’s charity and I’ve good health. Only one person said I was mad to do such a cycle,’ said Pam, speaking to The Southern Star.

‘I actually took a break just for a bit to visit family in France, and they’re big supporters of my cycle and have been busy raising money for me. We’re hoping to finish the cycle by the end of September, but that all depends on the weather too.’ Pam isn’t alone in her fundraising cycle, as she has a support vehicle with her at all times. She is enjoying the challenge so far, and taking in the wonderful scenery that the country has to offer.

As well as being an avid cyclist, Pam enjoys being outdoors and likes the healthy lifestyle. She is looking forward to travelling along the route of the Wild Atlantic Way, which will take her along the west coast of Ireland and into Derry. Pam, a former estate agent has so far raised €18,000 for the charity and is hoping that people of Kinsale can fundraise for her while she’s out on the road. So far, Pam has cycled over 835 km with Galway on her sights for the next stage of her cycle.