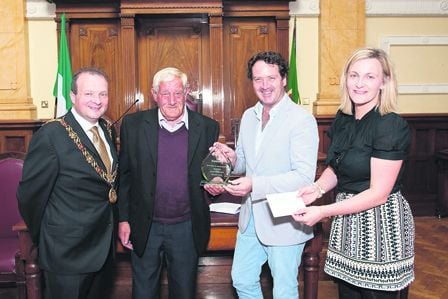 BANDON man Michael Foley was named as the overall winner of the 2015 Great Places to Live Competition at a ceremony in Cork’s City Hall recently.

On hand to present the award was celebrity gardener Diarmuid Gavin and Lord Mayor of Cork Cllr Chris O’Leary. Mr Foley was rewarded for his efforts in helping to make his home and community a great place to live.

Clúid’s annual Great Places to Live competition celebrates success, recognises tenant contributions and creates a positive culture that improves the social and physical environment of its tenants. The competition is organised for tenants of Clúid Housing, the State’s largest approved housing body.

The achievements of many other residents, including those from Clúid’s two schemes in White Street, were also recognised at the ceremony. Now in its fifth year, the competition aims to highlight the work of those who bring neighbourhoods to life right across Ireland.

‘I was delighted and very pleased to have won the award and I take great pride in looking after the place and I do a lot of work outside. I received a trophy and three vouchers at the ceremony,’ said a delighted Michael, speaking to The Southern Star.

Clúid Housing’s John O’Sullivan said: ‘Michael is an inspiration to all of us. Clúid established the Great Places to Live competition to recognise estates and residents just like Michael. We hope that his efforts will encourage others to get involved in their local community.’