From the Billy Barry kids to Gaybo – the Willy Wonka of Irish TV with his famous Christmas jumpers – and all the chaos, the Late Late Toy Show was always one of the most anticipated nights of the year

BEING a youngster of the 70s and growing up in rural Beara, there were very few extraordinary events throughout the year, but in early December there was one exception – The Late Late Toy Show.

In those early days of RTÉ, there wasn’t a lot of television geared towards young ones, so from the very first full show in 1975, it immediately became a Christmas staple in my house.

Watching the programme was my TV highlight of every year. It signalled the distant shape of the festive season that was looming on the horizon. My mam abandoned the bedtime routine and allowed me and my siblings to stay up late. There was no fancy party, but my mam brought out the TK lemonade, Taytos and a few half-penny sweets, which added to the buzz of the night.

The day itself would be in a joyous frenzy in anticipation of the show. It had been the talk of the playground for the week beforehand. I wondered if the toys I saw advertised on the telly would make an appearance, along with the firm old favourites, and I couldn’t even guess what surprises would be in store.

I sat on my pouffe in front of the roaring fire in my long nylon nightdress, my feet tucked into fluffy slippers, waiting patiently. Everyone else crammed on the couch, pushing and shoving for space. My siblings and I found it difficult to contain our excitement, so there was plenty of bickering to pass the time. 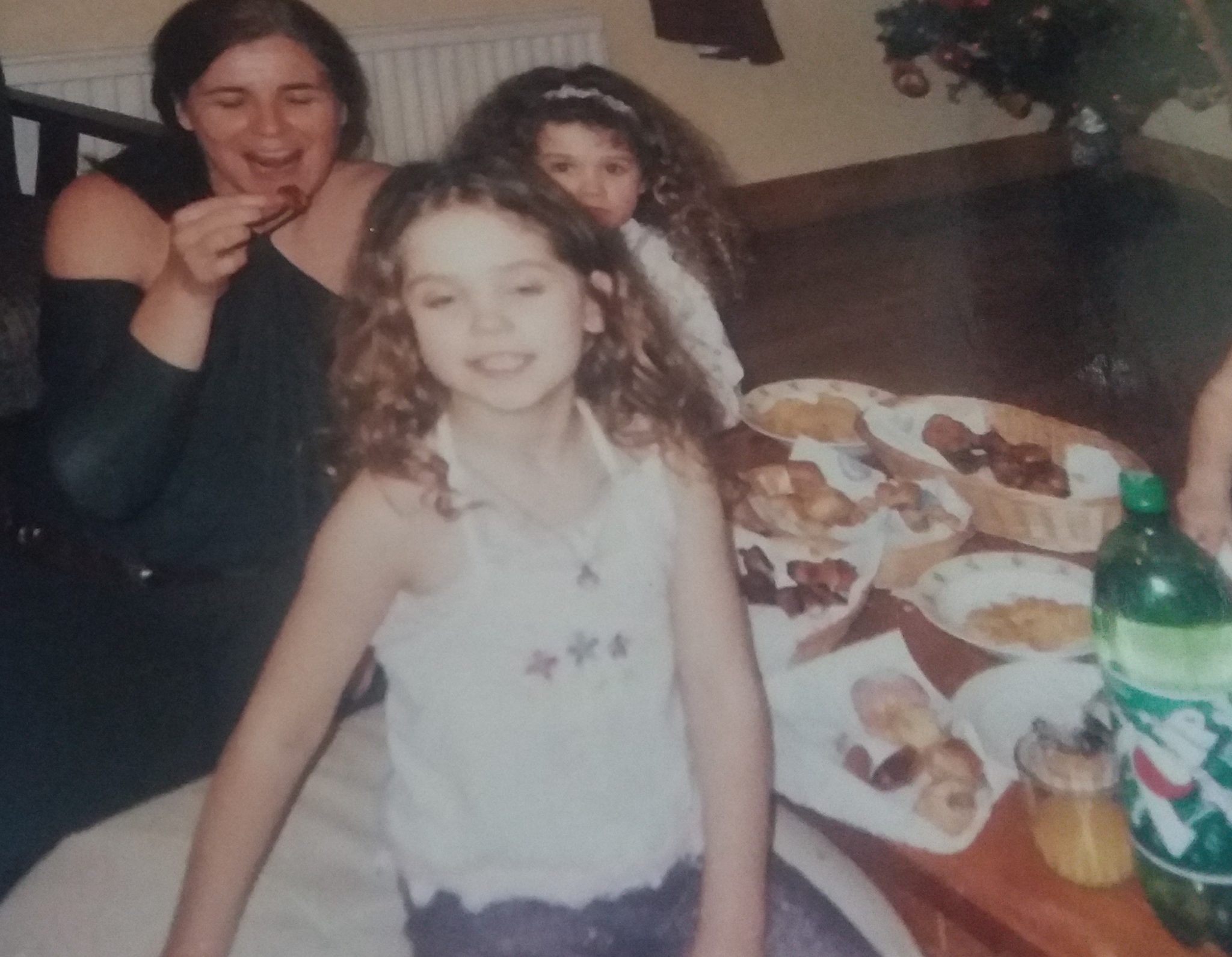 Maria with her nieces Lily and Lucy at a Toy Show ‘party’ in Beara.

When the TV announcer appeared on the screen and delivered the eagerly-awaited words ‘and next on RTÉ, The Late Late Toy Show,’ the screaming in our house was deafening. We all hummed along to the beat of the theme tune as we watched the mascot owl fly across the telly. ‘Ladies and gentlemen, to whom it may concern… it’s The Late Late Show … and here is your host, Gay Byrne.’ The adult audience in Studio 4 in Donnybrook clapped and cheered. My house descended into silence. I watched, mesmerised, as Gay Byrne, the Willy Wonka of Irish TV, entered the screen surrounded by hundreds of toys. I tried to take in everything from the rocking horses, pirate ships, the Fisher-Price garage, the exotic stuffed animals, especially the giraffes as tall as my bedroom, the wind-up gadgets, train sets, and my favourite of all time, Lego. It was an emporium of every child’s dream ... and more.

Gaybo, in his seasonal jumper, would sit on the floor and play with the toys and games, along with the crew. He introduced toys I couldn’t even have imagined. I remember being insanely jealous of the kids that got to be on the show. When I was young, my ambition was to become a toy tester, sure, it had to be the best job in the world.

Of course, when you have kids, plus toys, plus live TV, it can only mean anarchy and the best parts of the show were when toys didn’t do what they were supposed to do or they collapsed in a heap on the floor, or a toy wouldn’t work for Gay which increased his frustration with it, until finally tossing it aside and moving on to the next one ... priceless! It was so much fun when there was a sassy child that flummoxed the master of ceremonies. The chaos was hilarious.

There were sections of the show that became hits, like the arts and crafts, with children explaining how they managed to make the piece. Most of the kids looked as if they were struck down with stage fright, and I knew for sure if I got the call the following year, I would do a better job!

As a bookworm, my favourite section was, of course, the review of new publications. How I wanted everything, including all the Christmas annuals. I couldn’t wait to be a future reviewer.

I eagerly awaited the trail of electric and pedal vehicles, jeeps, karts, trucks, and quads. Remote-controlled cars, bikes, tractors, and trailers thrilled as they paraded across the studio. Gay would stand well out of the way of the convoy as there was sure to be a disastrous three-point turn, collisions and a crash. Then Gay would panic and shout for a team member to help.

One of my favourite memories was the year Gaybo ran towards the audience and squirted them with a water pistol. I was doubled over howling as the people dressed in their Sunday best were squealing and screaming in horror. How I dreamed I was there.

Between Gay’s dreadful jokes, choirs, dancers and singers, there were the Billy Barry Kids. Those youngsters were so smug and sickening that I didn’t like them at all. Not an ounce of jealousy!

The show gave us notions of what Santa could deliver in a few weeks. Deep down, we knew we wouldn’t get everything we asked for. Back then, we were always grateful for what we got.

My poor mam had a job trying to get me to bed afterwards when all I wanted to do was write my letter to Santa. I clambered into bed with dreams of toys. For a change, I looked forward to school on Monday when my friends and I could dissect the entire show in the playground.

This Friday, Ryan Tubridy will dig out his dodgiest Christmas jumper and host The Late Late Toy Show on RTÉ One. While my childhood days are decades over, I will watch, because for two hours it will let me relive my childhood excitement and the feelings Christmas used to bring when I was young. The show is, of course, one of my favourite ‘forever’ memories.