Kathleen Keane’s Curiosity Shop was a hit with the crew.

When ITV ‘rolled’ into West Cork last summer, it provided plenty of food for thought for the local economy, writes Niamh Hayes

THE filming of Graham Norton’s novel Holding caused quite a stir in West Cork last year.

And now that it has premiered on our television screens, the series has shone a light on lots of local businesses that helped out with the production and benefitted greatly from its decision to film here.

Angela Molloy is the owner of Apple Betty’s Café in Skibbereen. She heard that the production of Holding was coming to the area, so she reached out to offer her services.

‘I had heard they were coming and were looking for places to stay and for people to provide food, so I contacted them, saying that I was available to help. I didn’t know if anything would come of it, but I reached out anyway,’ said Angela.

At the time when she made that initial contact, she never imagined what was coming down the line.

Over the many weeks of production, Angela provided an array of items, including trays of sandwiches, full dinners, wedding cakes and the famous ‘PJ’s Roll’.

PJ is the local garda in the series, who really enjoys his breakfast rolls. Angela was tasked with stuffing the breadrolls with every breakfast item imaginable – and they are now on the menu and christened ‘PJ’s Rolls’.

‘We didn’t go on site, the food was always collected from us at the café first thing. Some of the requests were really “out there”. I had to make steak dinners and have them ready for 8am!’ she laughed. Angela Molloy of Apple Betty’s in Skibbereen, above, with one of ‘PJ’s Rolls’ which are now on her café’s menu. The rolls were made famous by Sgt PJ Collins’ (played by Conleth Hill) and his housekeeper Lizzie (played by Brenda Fricker) in Holding. Above, left, some of the show memorabilia which Angela is displaying in the Skibbereen café. (Photos: Anne Minihane & ITV)

‘Due to a number of funerals in the show, I made trays and trays of sandwiches that were used on set for them. I also had to make a couple of wedding cakes. I had never done a wedding cake before, so that was an experience! It was a wonderful thing to do.’

Angela is really happy she got to be part of the whole thing.

‘Because of Covid, we kept opening and closing over the last two years, so this was welcome business for us. It was great to be involved in the hype of it all. There was a rush that came with it,’ she recalled. ‘Changes were made last minute, but I was told this is show business and things always change at the last minute.’

Angela was lucky enough to receive some memorabilia from the production set, including ornaments, jugs, bowls and vases. She has used them to put together a display in the café where the famous ‘PJ’s Roll’ is a big hit!

Drimoleague was also turned into a television set for the duration of filming, with the cast and crew coming and going there over the space of six weeks.

The local charity shop, the Curiosity Shop, did very well out of it. As the set was installed on the main street, filming took place right outside the front door.

‘The lady in charge of props for the show was from Wicklow. She used to come in all the time and buy bits and bobs that were used as props on set,’ said Kathleen Keane, who started the shop in 2009.

‘They bought clothes, ornaments, mirrors, lamps, old pictures, and dried flowers, and jewellery that probably wouldn’t have ever sold otherwise.

‘At that time of year, we also had plants instore, and they bought geranium and cactus plants for the set,’ added Kathleen. The cast and crew also came into the shop on their breaks and would buy items for themselves.

‘It brought great life to the village. We did really well out of it,’ said Kathleen. 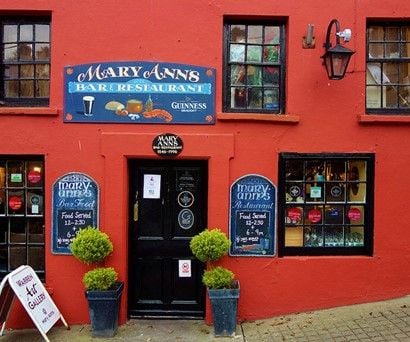 Mary Ann’s in Castletownshend was another regular haunt for cast and crew.

Another West Cork village that was brought to life on screen last summer was Castletownshend.

‘Castletownshend was the location for the last 10 days of shooting,’ said Fergus O’Mahony, owner of Mary Ann’s Bar and Restaurant.

‘They were a great bunch of people, both the actors and crew.

‘They were of huge benefit to the area, and I think it will do a lot for tourism here. I hope they make a second series this year,’ added Fergus.

• Holding will be on Virgin Media More on Tuesday April 12th at 9pm.