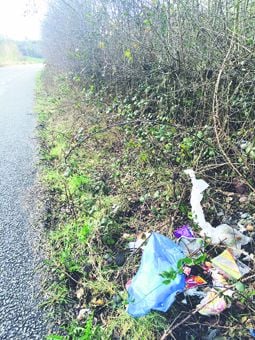 Rubbish left on the N71

Tourism Minister Paschal Donohoe has warned that littering along the Wild Atlantic Way has the potential to seriously damage the tourism product.

Speaking exclusively to The Southern Star during his recent trip to Inchydoney, the Minister said the route had to be kept ‘authentic’ and ‘clean’ and that instances of fly-tipping along the route caused a real threat to its popularity.

He was speaking after being informed of an apparent increase in illegal dumping along major roads in the area, following an examination of regional and rural roads by Star reporters.

Our special investigation this week reveals many instances of rubbish bags, domestic waste and items like mattresses, a dead sheep and even doors having been left abandoned in often very scenic areas.

This is the second year of promotion for the Wild Atlantic Way – the stunning touring route that starts in Kinsale and travels along the West Cork coast and into Kerry and beyond.

However, many spots along the way were found to have fallen victim to passers-by, with coffee cups, plastic bottles and sometimes more unsavoury items, appearing to have been thrown from passing vehicles into hedges and hard shoulders.

The looming tourist season has, however, prompted a huge upsurge in community groups getting out and about, and organising local clean-ups.

Over 130 bags of litter were collected by a group of 59 volunteers recently in the Bealad area near Clonakilty, with a second day’s outing planned for this weekend near Rossmore.

Members of the Bandon Angling Association also collected several bags of rubbish recently, at an area known as Cottage Walk, and refuse firm KWD are sponsoring a clean-up day on April 18th, and pledging to collect any bags of rubbish collected throughout the West Cork area.

The region’s Litter Waste Inspector Teddy Browne said that there was now a huge community spirit built up, with several volunteer groups throughout the area, helping to keep the area clean.

But he echoed the concerns of Minister Donohoe. ‘We are the custodians of the Wild Atlantic Way – we have always lived on it – but the foundation block of that showcase is built on a clean environment.’

On-the-spot fines of €150 for fly tipping are part of Mr Browne’s arsenal, but education has a huge role to play too, he said.