WINTER is upon us. The clocks are gone back, the evenings are dark, supply chains are threatening poor Santy and you get the sense we’d all vote for spring if there was an election in the morning.

We’ll get through it, though. We always do.

So, for the time being, what better way to while away a winter’s evening than spending a couple of hours in Mark Zuckerberg’s metaverse?

The what, says you? Indeed.

If you’ve been living under a stone (which is arguably a more rewarding experience than actually spending time on Facebook), the social media network’s chief executive Mark Zuckerberg announced the rebranding of the parent company of Facebook, Instagram and WhatsApp to ‘Meta’ last week.

‘Announcing Meta — the Facebook company’s new name,’ the tech giant proclaimed. ‘Meta is helping to build the metaverse, a place where we’ll play and connect in 3D. Welcome to the next chapter of social connection.’

I’m no expert but, from my understanding, the metaverse refers to new digital spaces which incorporate elements of our physical world – so you might be able to go see a virtual concert, buy digital clothes or view digital works of art, wearing a virtual reality headset or, in the future, by getting a chip implanted in your body.

The reaction online was scathing, to say the least.

I think most of us are already exhausted from the last chapter of social connection, thank you very much. When you think about it – what has Facebook or any other social media network really done to improve our lives? Has it really connected us more? Sure you can stay in touch with old school friends and keep abreast of what far-flung family members are up to. That would have been inconceivable for older generations.

But there is a mounting body of evidence that shows how the site and others are having a toxic effect on our culture. A US Senate hearing featuring Facebook whistleblower Frances Haugen was told how the company’s advertising-based business model needs to keep people on its platforms for as long as possible, and the company exploits negative emotions to achieve that.

We can all see this playing out amongst friends and family members. You see parents looking on, worried, as their kids spend hours on these sites, scrolling away while actual reality unfurls around them in three dimensions.

Do we honestly need an even more immersive version?

I was in a small West Cork town last weekend reading about this story in the papers over a lovely last-of-the-season outdoor breakfast.

A middle-aged fella pulled up in a car next to the café and popped out the driver’s door, and I noticed he was walking in his bare feet on the wet ground. He proceeded to sit at a table near me and ordered his morning coffee, his bare feet exposed to the October breeze.

There’s a man who needs no further dimensions, I thought to myself. He doesn’t need to augment his surroundings with anything.

He doesn’t need 3000 virtual friends. He doesn’t even need shoes at the end of October, for God’s sake. 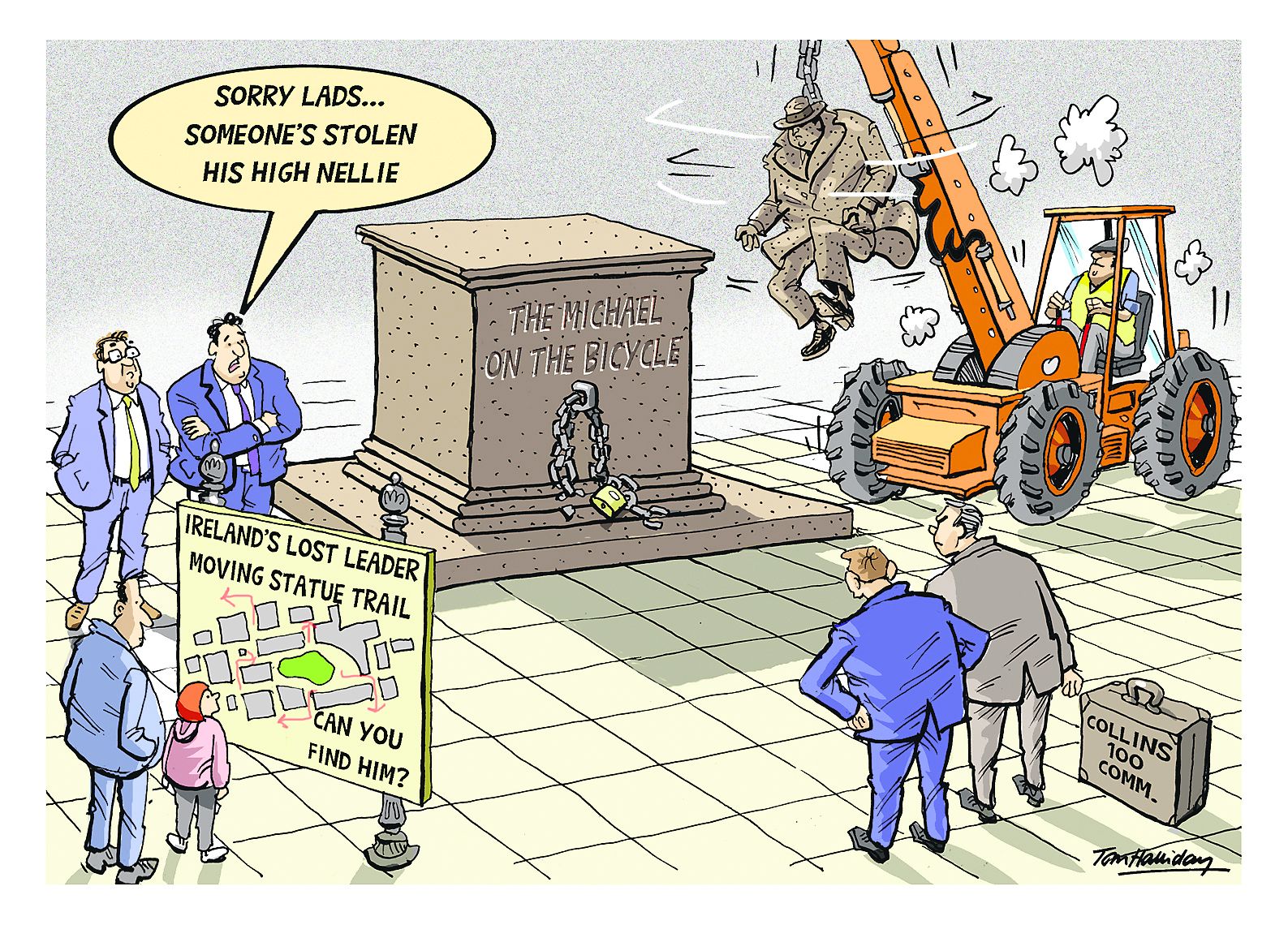 I READ with interest in last week’s Southern Star that the Michael Collins 100 Committee is to commission and finance a statue of The Big Fella and gift it to Dublin City Council.

This is absolutely top drawer emotional blackmail, in my book - making the Jackeens an offer they basically can’t refuse.

It’s worth saying that this is precisely the sort of moral support we exiled Corkonians need in the capital. It would surely bring a spring to my step to see a fellow West Cork man standing tall against the Dublin skyline, looking down on all the hipsters as they go about their daily unicycle commute.

My only suggestion is that the statue shouldn’t be tied to any one location. I think it could be the world’s first ‘pop-up statue’, moving locations on a daily basis. Collins was notoriously elusive, of course, and would never be a sitting duck for the Brits, so this is what he would have wanted, I reckon.

He could be in front of The Dáil on Monday and pop up in the window of Brown Thomas by midweek.

Of course, the statue will also need an appropriately Dublin nickname. We’ve already got The Floozie in the Jacuzzi and The Tart with the Cart. How about A Langer for the Skangers?

THE Irish Film & Television Network reported last week that Amazon Studios have secured the services of Saoirse Ronan and Paul ‘GAA chic’ Mescal for the sci-fi thriller Foe in a deal worth €30m.

Filming is due to get underway early next year in Australia. The actors will play a young married couple living in a dystopian near-future.

I wonder if it’s about a young Irish couple trying to buy a house?