When four intrepid West Cork lads set off last year from Malaysia on a sailing adventure, they certainly hadn’t factored in a global pandemic, and its associated drama. But now they’re back on terra firma and ready to tell their incredible story.

A group of West Cork lads are back on terra firma having had one of the most exciting few months of their lives, on an international adventure.

Having conquered pirate-ridden waters, survived being chased by the world’s largest lizards, and faced into wind speeds of 40 knots in the South China Sea, Covid-19 didn’t entirely faze them, even if it cut their journey short.

The fearless four, all now back home, are Damien Collins (25) from Durrus, Ger O’Sullivan (24) from Bantry, Eoin Dennehy (26) from Castlehaven and Paul Ryan (26) from Rossmore.

Damien and Ger were friends from school, and befriended Eoin and Paul in UCC. Their crew of 10 was made up with other Cork lads and their idea was inspired by a YouTube documentary called Chasing Bubbles.

Having graduated from UCC in various courses, including pharmacy and engineering, the lads made their way to Australia and worked in construction to afford their 44ft Monohull for US$75,000. Called Seanchaí, they hit the high seas in April 2019 with almost no sailing experience at all.

The last time The Southern Star caught up with the lads was in February when they had made it to their end destination of Lombok in Indonesia, and were planning their next challenge: to cycle home.

They had bikes sponsored by McCarthy Cycles in Cork city and were going to raise funds for the RNLI.

Damien explains: ‘Myself, Ger, Paul and Eoin spent a month in Vietnam. We finished up in Saigon at the start of March and Eoin headed home.

‘The rest of us had planned on flying to Tehran in Iran and starting our cycle home from there, but because Covid was starting to be an issue, especially in Iran at the time, our visas got cancelled. We were thinking of just going to Georgia instead, but then we made a bit of a last minute decision to do a month in India first and landed in Kochi down in the southern state of Kerala.’

That’s when things started to get a bit serious.

‘One of our first stops was meant to be an elephant sanctuary, but it was shut up the day before we arrived. Then the next town over we couldn’t get any hostel to stay in as they were forced to close by the police, so we camped out in a field of rushes outside the town.’

Their main issue was cycling in the heat, which Damien said was ‘absolutely brutal.’

‘We tried our best to cycle for a few hours early in the day then again at night but India isn’t exactly known for its high road safety standards.

‘One of the days we were trying to make ground and cycled all day, and the two boys suffered desperately for it and ended up with severe cramps. They were bedridden in a crappy hotel for two days after it. After that we bought a load of rehydration salts because with the amount we were sweating, it was the only option.’

As the lads cycled through towns and villages they were often met with people shouting ‘corona, corona, corona’ at them.

‘We’d just keep the heads down and cycle on to the next spot. But then on the other hand you had some people who were really friendly so it was a weird set-up, you never knew what to expect.’

A few days later, the lads were stopped on the road by health officials who asked them for their passports. Police were involved, too, and they were all taken a medical centre.

‘We had been told we were just going to have a medical exam and we thought we’d be on our way again then, but eventually an ambulance arrived and told us we going up to a hospital in Manjeri for a few days,’ recalls Damien.

They weren’t allowed bring their bikes and had to make do with locking them together in an abandoned building beside the medical centre, full sure that was the last they’d ever see of them.

After a hospital interview, they were taken to a hotel to quarantine for two weeks.

‘We ended up being stuck in that hotel for five or six nights. It was a decent enough spot and we all had our own rooms, but we weren’t allowed to leave and there were armed police outside day and night. We got fed twice a day, played a lot of cards and binged on Netflix. The reason they were so strict was that some English lad had been put in quarantine just before us ,but snuck out and made a break for the airport. He got stopped before getting on the plane and it turned out he was Covid positive so they became really wary of Europeans then,’ said Damien.

The drama continued. After a few days, news filtered through that all outbound flights were being grounded. 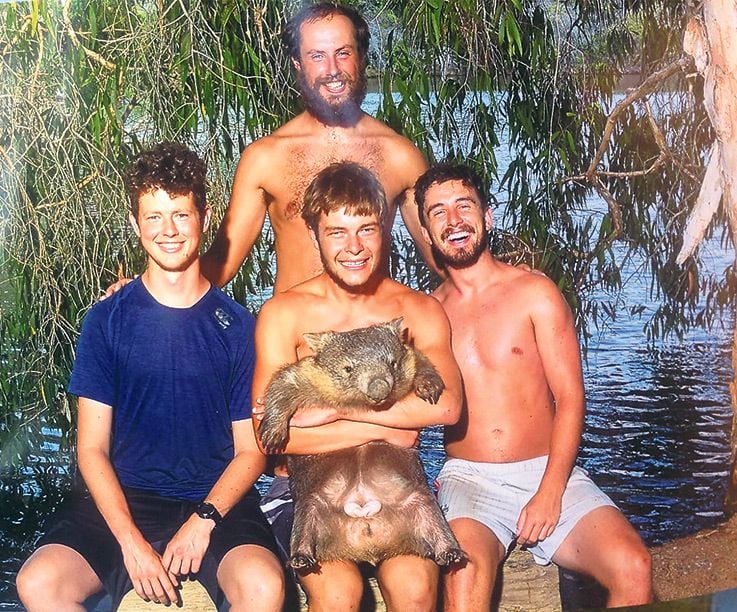 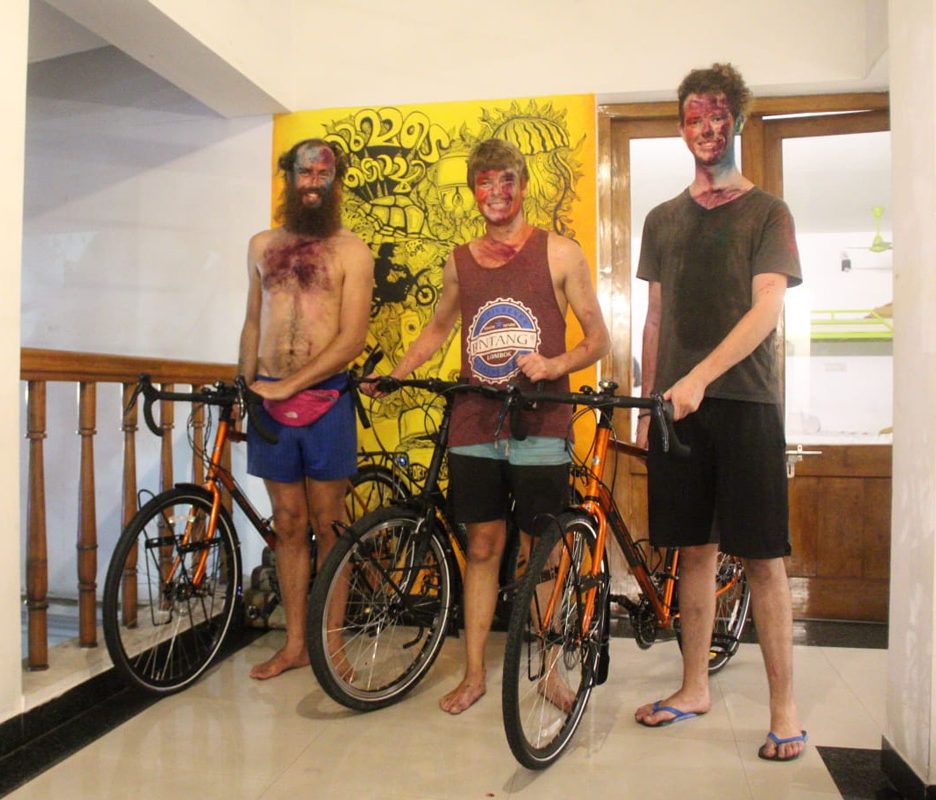 The trio of Ger, Paul and Damien after taking part in the Indian Holi festival before they hit the road on their bikes

‘We knew we’d probably be stuck there indefinitely if we didn’t come up with a way around it. The Irish embassy helped us, and told us to get a Covid test done and that if we came back negative, we should be allowed to fly out. At first we weren’t allowed get a test, because we didn’t have any symptoms. We finally got one and they came back negative, so happy days!’

While waiting for their results, they faced the major challenge of getting their bikes back, which they managed, and finally boarded one of the few flights out that wasn’t cancelled.

‘We flew from Khozikode to Doha and then onto Dublin, getting back to Ireland after a year and eight months away,’ said Damien.

While admitting to not being easily phased, he said their last few days were ‘fairly stressful’, and he was delighted to touch down on home soil. He’s the eldest of four, and he said parents Mike and Riona back home in Durrus were equally thrilled to see him, along with dogs Cody, Lulu and Rocky.

‘I’d say my mum was a bit worried alright but she kept it to herself!’ he said.

They all quarantined at home and one of the first things they did afterwards was climb Hungry Hill, and staycationed in Donegal.

What’s next for them?

‘I’d say for now my mother is pretty happy I’m grounded because of Covid so I’m not sure! We might plan a cycle around Europe when we can.’

Would he recommend to others to embark on such an adventure?