The Dunmanway event was initiated by the West Cork Education Centre 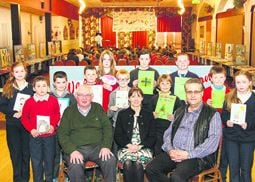 The Dunmanway event was initiated by the West Cork Education Centre

The students participated in the Scriobh Leabhar project, which was initiated by the West Cork Educaiton Centre.

The storytelling event, held in Dunmanway, was run in conjunction with the recent Seachtain na Gaeilge, where a total of 1,028 books were submitted.

This year’s event welcomed the largest number of participating schools and children since the early beginnings of this initiative.

Students who composed, designed and published their own books in Irish were recognised for their endeavours.

The ‘scéalaí’ is a strong advocate for the importance of stories and story-telling.

Noel was joined this year by Connemara man Art Ó Súilleabháin, a teacher and writer of children’s books in both Irish and English.

Scríobh Leabhar doesn’t just involve children – teachers are also offered a training workshop to help them support the children in publishing their books.

The ‘Scriobh Leabhar’ project is managed in conjunction with Foras na Gaeilge.

Mary O’Donovan, director of the West Cork Education Centre, expressed her delighted with the number of schools and children participating in such a worthwhile initiative in support of Irish language development.

‘It was encouraging to listen to the children as they read their stories with such pride and confidence,’ she said.

‘This contributes to a development of competence and confidence in the Irish Language at a very young age.’

She thanked Foras na Gaeilge for their support over the years and also the schools of West Cork that, she said, ‘commit their time and efforts’ to the annual event.