AN impromptu visit to West Cork for the novelist John le Carré – who died on Saturday night – and a genealogical discovery moved him close to tears.

Both genealogist Margaret Murphy, who located the birthplace of his beloved grandmother, and tour guide Richard Moxley who drove him across the hills from Kenmare, were struck by David Cornwell’s humble response during his visit to the Skibbereen Heritage Centre on July 20th 2019, and both remember him with affection. 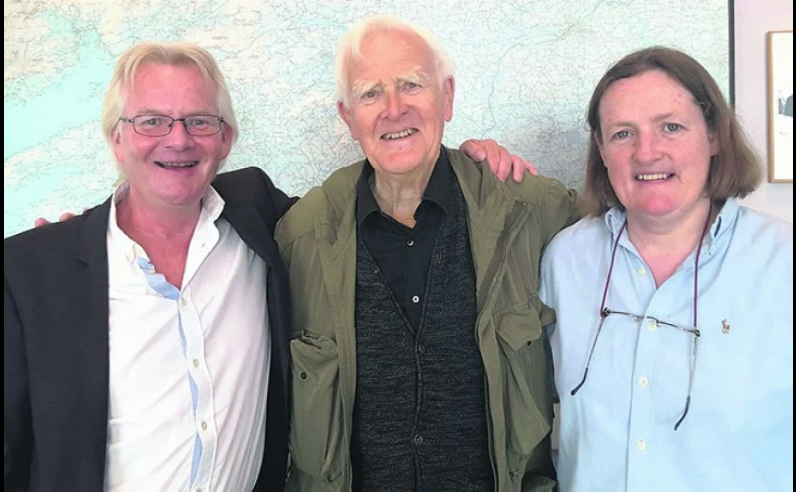 With Margaret Murphy and Richard Moxley in Skibbereen Heritage Centre.

The author of 25 spy novels, who wrote under the le Carré name became visibly emotional when Margaret uttered the words, ‘Welcome home.’

And now, his friend, the novelist John Banville has revealed that le Carré was considering moving to West Cork and had begun applying for an Irish passport.

Banville said that Le Carre was appalled over Brexit and wanted to move back to his ancestral home.

Tour guide Richard Moxley said he had been hired to take David and his wife, Jane, on a sightseeing jaunt on July 19th that year, but David called the next day and suggested a solo run to Skibbereen – the town he believed was the homeplace of his grandmother, Elizabeth Wolfe.

It was Elizabeth Wolfe, his paternal grandmother, that was the stabilising influence in David’s life. After a brief online search, Margaret pointed to the computer screen and showed him the location and the date of her birth: Inchinattin, near Rosscarbery, February 20th 1874.

The ‘welcome home’ nearly floored him. Margaret said the writer touched the screen and told her, ‘Everything that I have become I owe to this lady.’

Richard extended the voyage of discovery by bringing the writer to Inchinattin in search of the homeplace that still exists but has been extended many times over the years.

Richard described David as both ‘interesting’ and ‘a deeply caring person.’

Margaret was also impressed. She gratefully received a copy of his latest book, but subsequently passed it on to his remaining West Cork relatives as a memento of his visit.

Elizbeth Wolfe effectively raised David Cornwell and his siblings and Margaret said the visit appeared to her as if he was ‘bringing her home’.

David Cornwell died on Saturday night at the age of 89 following a battle with pneumonia.

He was a former member of the British security services, both MI5 and MI6, which he left in the 60s to pursue a full-time career as an author.