Nicole Keohane, 23, brings her grandparent's 100 strong herd of cows back to the fields after milking on their farm in Innishannon. Photo: Andy Gibson.

A true passion for agriculture allied with her involvement in cutting-edge scientific research is making 23-year-old Nicole Keohane one to watch, writes Emma Connolly

A YOUNG West Cork female farmer has just been granted funding for a cutting edge research project to show how a non-antibiotic approach to udder health can help a dairy cow to live longer and produce more.

And Nicole Keohane will be looking forward to putting her findings into practice on the Innishannon farm she works alongside her paternal grandparents.

‘I specialise in the treatment of calves to cows whilst taking a non-antibiotic approach. I am about to begin my PhD where I will be researching a new approach to udder health in Irish dairy cows in partnership with AHV.

'This research will be focusing on a non-antibiotic alternative. I was very fortunate to receive funding from the Irish Research Council’s Enterprise Programme to carry out this research,’ she explained.

Antimicrobial resistance (AMR) is a global health and development threat, and was declared as one of the top 10 global public health threats facing humanity by the World Health Organisation (WHO) in 2020.

This research project is regarded as vitally important as AMR is a mounting concern within the dairy industry, to such an extent that preventative antibiotics in livestock will become heavily restricted under new European legislation.

When Nicole isn’t busy working and conducting her ground breaking research she runs a 100-cow dairy farm with grandparents John and Anne.

They’ve been farming for over 30 years and she says she definitely owes her passion for agriculture to them. 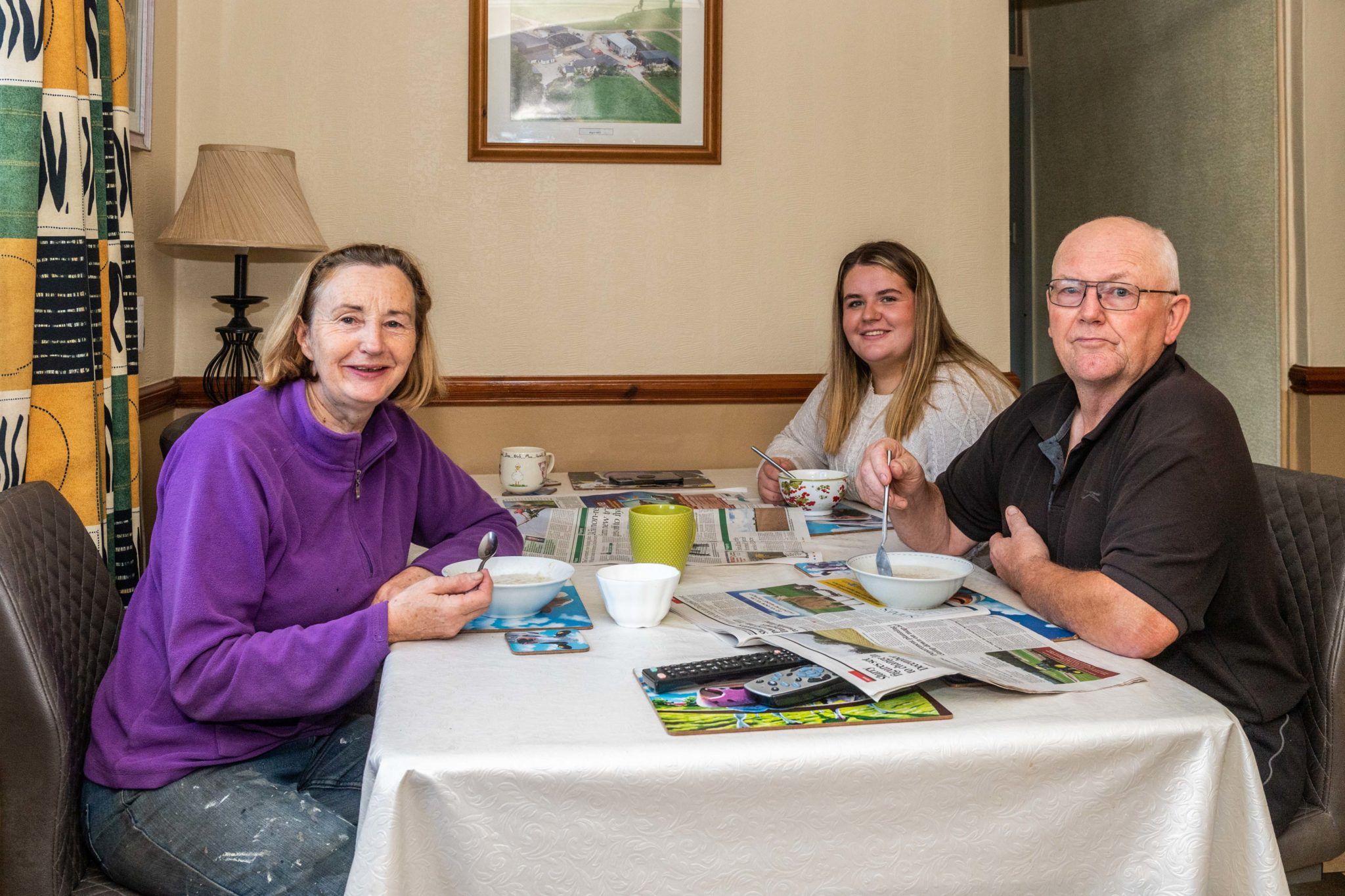 She grew up in Kinsale, describing herself as a bit of  ‘townie’ and her parents work outside the agri sector. Interestingly, farming skipped a generation in her family.

‘From a young age I remember feeding calves with my grandfather, or getting spins on the tractor with my dad.

‘But I really got into the day-to-day farming when I was about 16, where I was milking cows after school and on weekends,’ she said.

‘I enjoy farming alongside my grandparents, they’re extremely knowledgeable. I’m also very lucky that they are the type of people to take my own opinion and ideas into consideration when it comes to trying something new, or improving the farm,’ she said.

‘It can often be difficult working along-side family members (anyone in any sector will tell you the same!), but it’s just a case of leaving any farm related arguments in the yard, and not bringing them into the house.’

Jokingly describing herself as a ‘fierce woman for notions,’ she’s always on for trying new on-farm innovations. 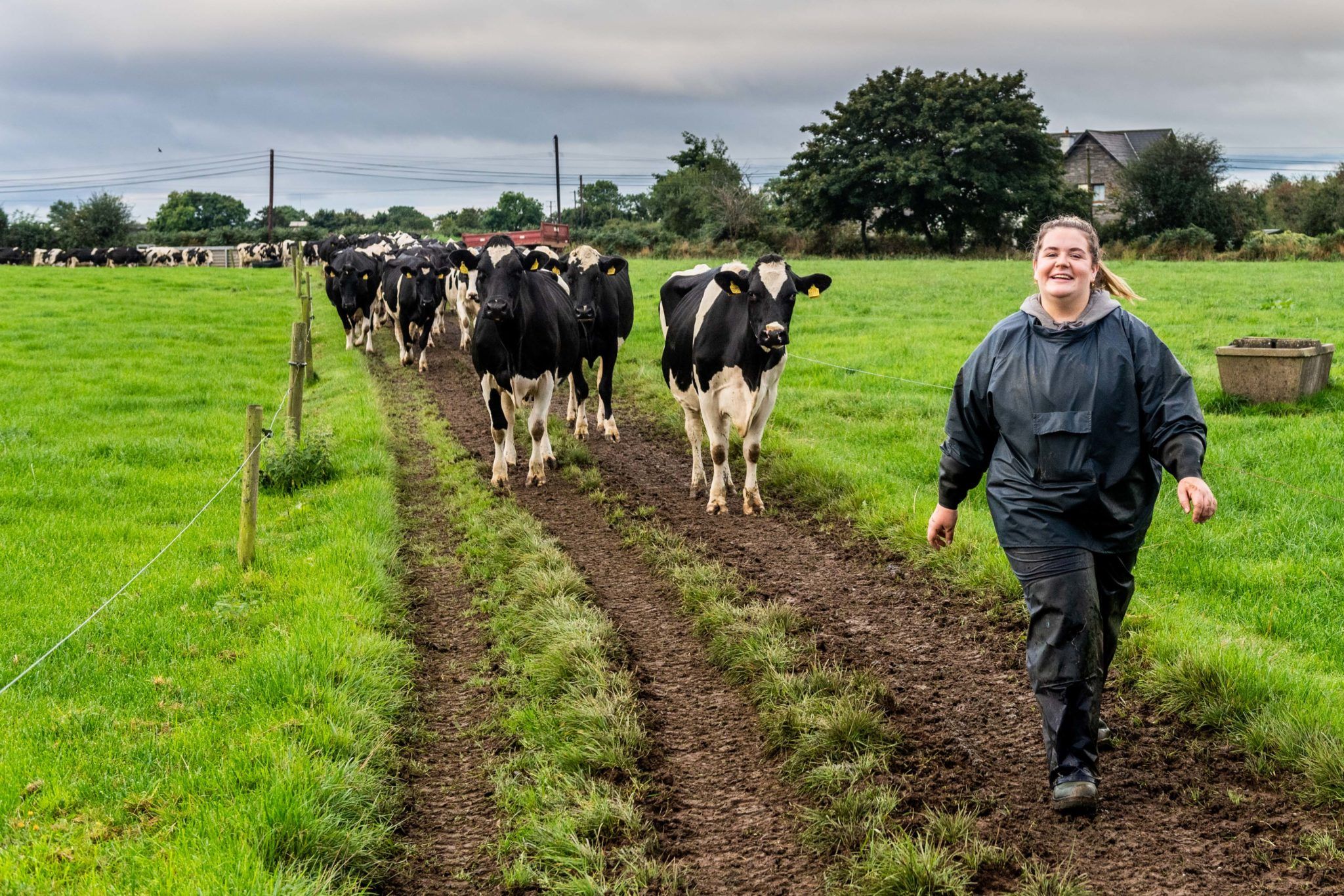 ‘With my previous job in sales with AHV I was spending most days talking with farmers, and I’d always try to find out what they did differently, and the results they attained from this. I’d be coming home with all different sorts of new products, or methods I was wanting to try out. My poor grandparents would have an awful lot of reeling in to do with me some evenings before I got too carried away with myself.

‘However what we have changed up has seemed to work very well for us. Since working with AHV we have starting treating cows with a SCC greater than 200, whereas previously we were nearly waiting until they were millionaires. This has made a huge difference to the number of clinical cases of mastitis we were getting, and has cut down on repeat offenders. The fact that we can do this without the use of antibiotics is a huge bonus to us.

‘We’ve also started stomach pumping any sick or off form cows. Since the beginning of Spring I’ve only had to pump about four cows, but the difference it has made to their recovery has been phenomenal. Cows require a lot of energy, and if an off-form cow has gone off her feed she’ll go downhill very quickly. By pumping cows I’m getting energy alongside minerals, toxin binders and rumen buffer into her. The same way that when we are we turn to energy drinks.’

In terms of being a female farmer, it’s not something that’s posed her any challenges.

‘Personally, it hasn’t caused me any setbacks within the sector. All of my achievements thus far have been on the back of hours of hard work, and a drive to better myself.

‘Also, the percentage of women in agriculture is continually on the increase, with agricultural courses in WIT having a pretty much 50/50 split over the past couple of years, often times with more women than men.’

Her grandmother has been a huge inspiration and role model.

‘She has always been an advocate for farmers and standing up for our rights. As long as I can remember she has been involved in various farmer advocacy groups such as the IFA, or on the co-op boards.

Most recently she was appointed as a board member of the NDC, where notably she is also the only woman on the board.

'I’ve often been into yards where my customers knew of Anne through various organisations, and I only hope that I can be talked of in the same regard that they have of her. One customer in particular told me “the apple didn’t fall far from the tree”, and I think it may be one of the best compliments I’ve gotten to date.' 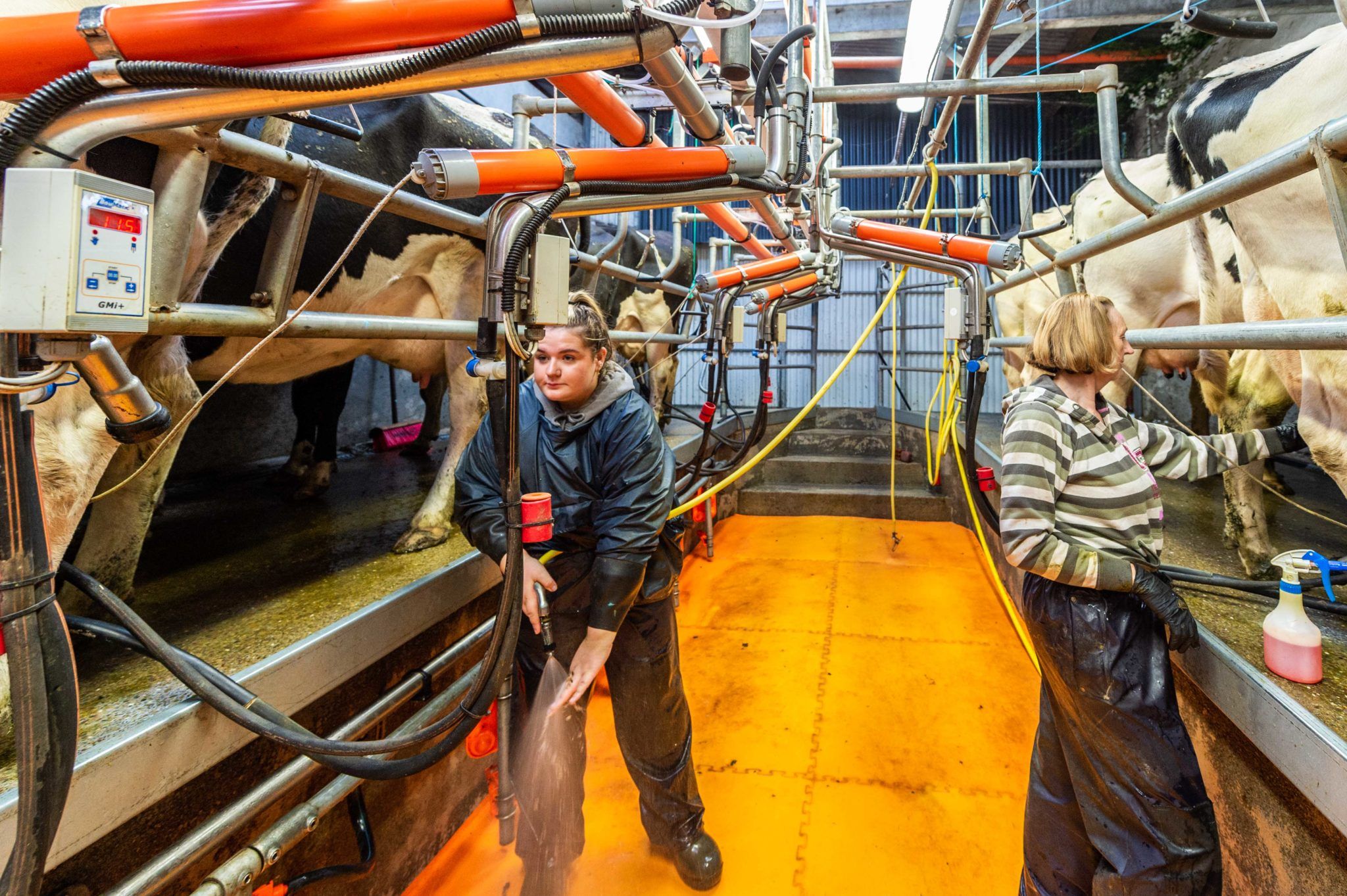 The young woman is confident a future  exists for agriculture.

‘The basic job description of a farmer is being able to produce food for the people, and with populations increasing it is becoming more and more important that the food chain is secure. There’s always debates surrounding new ‘fad’ food preferences, such as plant based diets, and where that might leave our industry.

'However data shows that some 25% of the population has increased their dairy consumption since the hit of Covid-19, according to the National Dairy Council (NDC). The real challenge that exists for us farmers within the coming years is in developing new and not even more sustainable, but more regenerative food production methods, which can yield similar if not increased results. There are terrific trials being carried out in WIT at the moment in regards to this,’ she said.

In terms of rising to the challenges of climate change, she feels that too often the sector can get the finger of blame pointed at them.

‘Don’t get me wrong, I am an absolute believer in doing our part for the environment as custodians of the land, and striving for a better future. However I do wonder where it is all going wrong. Take the Basic Payment Scheme for example, what was once a ‘carrot’ to ensure food security, is now being used a ‘stick’ to penalise farmers at every corner. Ireland is renowned for having the lowest carbon footprint for milk production within Europe, and the fifth lowest in the world for beef.

'The big talk at the moment is curtailing the dairy herd (we currently have the same number of cows as pre-quotas) however if this is to happen then production will be moved to less sustainable parts of the world such as Brazil, where the rain forests are already being depleted daily. Perhaps instead of blaming Irish farmers, we should be acknowledging their ever-growing adaptations to new technologies (such as mixed species swards, low emission slurry spreading etc.) which are already being proven to reduce emissions,’ she said with passion.

As part of her work placement in college she did a stint in New Zealand which she was was . ‘hands down one of the best experiences’ she’s ever had.

‘The days were long where most days I’d be bringing in the cows at half three in the morning and going until seven or half past that evening, but I relished in it. I had plans of returning to NZ once I finished college however, due to Covid those plans were put on hold. I’d love to do some more travelling, visiting farms around the world and see how their systems differ to what I’m used to. Perhaps I could pick up on a few more ‘odd’ ways of doing things!’

When she’s not around cows she enjoys hanging out with  friends.

‘My ultimate ambition? Lord that’s a hard question! I’m that type of person that wants it all to be honest. The first thing on my to-do list is to complete my studies, which is a four year task, while also juggling a bit of farming to do my part at home. After that I’m just going to take it a day at a time, that’s what I’ve done up until now and seems to have worked well for me!’