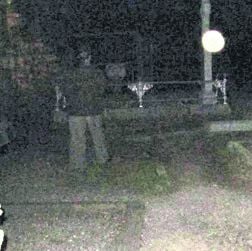 The photograph taken by the Cork Supernatural Society appears to show the figure of a man standing on the left.

A GROUP of Cork ghost hunters are asking the public for their help in identifying a mysterious figure in a photograph taken in Timoleague recently.

The Cork Supernatural Society took the photograph at the historic abbey, during one of their many investigations in West Cork.

The photographs, which they later posted on their Facebook page, appear to show a man standing to the left of a gravestone. But on the night, the five ‘investigators’ are certain there was nobody else in the vicinity.

According to group member Jackie Clarke, the photo was taken at about 12.15am, and the group didn’t notice anyone else there at the time. ‘There were five of us there on the night – two men and three women. This photo was taken just outside the old infirmary at the Abbey. We had been there for over an hour and saw no-one when the photo was taken. It’s pretty much impossible that out of five of us, no one saw any other human,’ Jackie told the Star.

Last Saturday night, two of the group returned to see if there was anything there which might explain the picture. ‘We wanted to check out the same spot to make sure there was not anything logical there,’ she said. She says they found nothing.