THE local economy received a boost last week with the announcement that a four-part television adaptation of Graham Norton’s first novel Holding will be filmed in West Cork over the summer.

After a tough 18 months, as well as the vaccines themselves, this is another welcome ‘shot in the arm’.

The ITV-commissioned ‘darkly comic’ series, part-funded by Screen Ireland, will feature Conleth Hill (who plays Varys in Game of Thrones) in the lead role of West Cork police officer Sergeant PJ Collins, described as ‘a gentle mountain of a man, who hides from people and fills his days with comfort food and half-hearted police work.’

One presumes that any resemblance to actual persons, living or dead, is purely coincidental.

So, thank you, Graham! I wonder if there’s anything to be said for putting up a statue in Bandon or Ahakista to the great man?

On the State level, feature film, TV and animation productions are well supported in Ireland. I should know this because, by way of full disclosure, my day job is producing animation and my own company has been the beneficiary of the Broadcasting Authority of Ireland Sound & Vision scheme which comes directly from TV licence receipts, as well as Screen Ireland production loans, and the s481 tax credit scheme which refunds you up to 32% in tax credits on your Irish production spend.

There is also a regional uplift of an additional 5% if production takes place in the regions. (Sorry, West Cork, but that’s how they refer to us in places like Dublin. The ‘regions’. I’m trying to sort it out, but their heads are filled with coddle.)

So there is significant, well-established State support and investment for the screen industries which, I would argue, society gets back in spades.

As West Cork will hopefully see this summer, there will be numerous trickle-down effects for the local economy once production begins.

Let me tell you, film crews need lots of coffee. Beyond this, there are the obvious, potential spin-off benefits for tourism, showcasing our beautiful scenery for the world to see.

We’ve seen examples of Irish stories taking their place at the highest level this year already. Wolfwalkers by Cartoon Saloon was nominated for an Oscar and Element Picture’s adaptation of Sally Rooney’s Normal People was a global hit on the BBC. You simply cannot buy that kind of cultural clout.

With RTÉ experiencing well-documented financial hardship and with streaming services like Netflix, Disney+ and Amazon beginning to supplant traditional TV networks, we now have a chance to introduce levies on these huge corporate conglomerates and ring-fence those funds for original Irish content.

This will help grow the industry and create a stream of blue-chip, high-tech jobs for the next generation. The EU’s revised audio-visual services media directive allows for such levies to be introduced, but Irish officials are currently looking to ensure such a levy ‘would be of sufficient benefit’. My question would be – what do we have to lose? 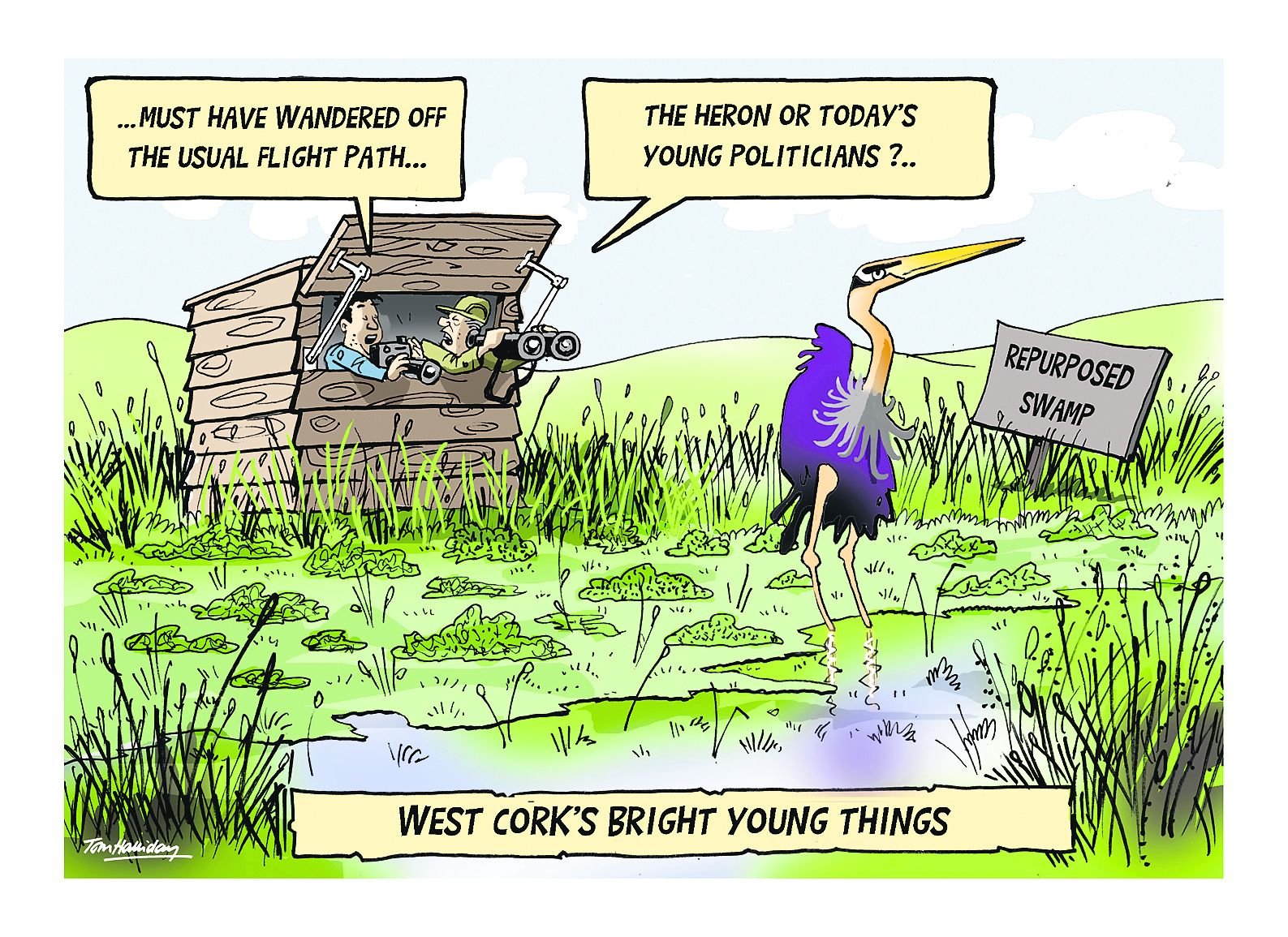 Time for a pesto party?

I SEE that local Fianna Fáil TD Christopher O’ Sullivan took to Twitter last week with the major news that he managed to take a snap of a purple heron at Grange Bog East in Clonakilty.

I had to double-check his profile to make sure he hadn’t defected to The Greens. In the past, you might have asked any self-respecting local Fianna Fáil TD to maybe personally fill a pothole for you but, if Christopher’s Twitter feed is anything to go by, you’d be more likely to ask him to help identify a rare orchid from Northern Sumatra or for his ideas on making West Cork a regional leader on climate change.

When politics is full of broad stereotypes and caricatures it can be hard to get your head around this. I mean, what’s next? Holly Cairns taking a helicopter to the Galway Races? The Collins’ brothers launching their own range of organic pesto?

Isn’t it reassuring, though, to see this sort of political diversity at play amongst the younger cohort? As was also reported in recent weeks, Holly Cairns made history (again, says you!) by entering into a paired voting pact with Fine Gael’s Minister for Justice Helen McEntee who was not able to attend a vote on climate and rental provisions due to her maternity leave.

This is the sort of bipartisan leadership that the country needs to tackle the very complex, seemingly intractable issues of climate change and housing, amongst others.

The future of politics in Ireland is likely to be quite fractured, more European in nature, with broad coalitions replacing overall majorities. This doesn’t have to be as chaotic and disruptive as it sounds.

It might be just the thing we need to displace the auction politics of old. God knows, we need long-term thinking and cross-party consensus if we have any hope of negotiating the rocky road ahead.

Rest assured, though, I’ll be back giving out about them all again next week.