WEST Cork’s fire brigade service was stretched to capacity as crews from almost every station were called to deal with 12 hill fires over a three-day period.

A spokesperson for Cork County Council’s fire department confirmed that approximately 80% of the wildfires that the service has to deal with occur during the closed season from March 1st to August 31st.

Of the 63 callouts that the West Cork crews have had since January 1st, 37 of them have been during the closed season when it is illegal to burn vegetation.

Castletownbere fire brigade were called out last Saturday night to deal with a hill fire at Rossmacowen, followed later that night by the Dunmanway crew to a fire at Coom Mountain.

Both fires were dealt with swiftly – within the hour – but there were bigger problems ahead for Dunmanway and Clonakilty and crews as they devoted seven hours to getting a forest fire at the mature Maulcragh plantation under control.

The fire at the plantation was described as ‘extensive’ and it required the services of a helicopter crew – engaged by Coillte – to draw water.

A strong wind drove the fire between 5pm and 6pm last Sunday and relatively low humidity levels, in the low 40s, made the fire even more difficult to extinguish.

A helicopter was used to saturate the high ground at the plantation allowing firefighters to concentrate on containing the fire from the forest roads. But it was 7pm before it was brought under control. 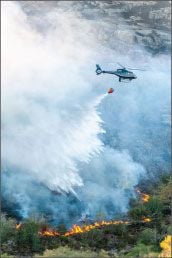 Later that night, Schull and Bantry crews spent seven hours battling a hill fire at Dunmanus, and the following morning the Schull crew was called back to yet another fire in the Dunmanus area.

On Monday morning, Bantry crews spent two hours bringing a fire at Coomleagh East in Kealkil under control, while the beleaguered Dunmanway crew devoted another three hours to dampening down hotspots at Maulcragh.

There was no rest for the Dunmanway crew because later that afternoon they were called to a gorse fire in Ballineen, followed by a small forest fire at Shiplake later that night. On Monday evening, a crew from Schull attended a gorse fire at Rathruane Beg in Ballydehob, while Bantry spent two hours dealing with a second fire at Coomleagh East in Kealkil.

The spokesperson for the fire service appealed to readers of The Southern Star to call in any fires they come across by phoning 999 or 112 because early intervention makes fires easier to deal with and prevents damage to forests, wildlife and property.