IF it takes a village to raise a child, it takes a family to run a farm.

And nowhere is that more obvious than in West Cork. Drive into any yard, on any day of the week and you’ll see people spanning several generations get- ting stuck in – and voluntarily too, for the most part!

The older generation share their wisdom with their children and grand children, and vice versa.

This unique farming model was why we introduced our Farming Family category to this year’s West Cork Farming Awards, and we invited people to send us their videos to show that passion and commitment.

The category was actually the brainchild of judge Caroline Murphy, a farmer and businesswoman.

‘I think that farm families represent everything that’s special about farming in West Cork. I’ve always believed that family is at the heart of farming, it’s nev- er just one person, and I know that from our own farm,’ she said.

‘It’s a very special way of life, and our winning farm family, the Lucey’s from Canovee near Macroom, captured this sentiment of hard work, good fun and a team effort in their video.

‘They are very worthy winners of the inaugural title,’ she said.

The Lucey’s prize includes a sponsored overnight stay at the Celtic Ross Hotel with breakfast, family passes to The Lagoon and Smugglers Cove, a picnic to enjoy during the day and an evening meal at the Hotel for all the family.

Next week, we will announce the winner of the prestigious Hall of Fame award, ahead of the awards ceremony which takes place on October 7th in the Celtic Ross Hotel.

EVERYONE in the Lucey family has an important role to play in the running of their farm – and that’s exactly what makes it the success it is.

Three generations are involved in the drystock enterprise in Canovee.

There’s Sheila and Gerard, their children Triona, Gearoid and Jean and their eight grandchildren – with another on the way.

It’s a well-oiled operation that’s directed mainly by Sheila (or nan as she’s known to her grandkids) who works full-time on the farm, with the rest of the crew playing vital support roles.

Sheila is originally from a farming background in Bantry, as is Gerard (or gan gan) who is from Canovee.

Triona picks up the story: ‘They bought the farm when they got married in 1980, starting out buying bull calves and rearing them to beef.

‘After a few years they got into sucklers but it was always mam’s ambition to have some pedigree cattle. That came about in 1997 when she bought some simmental and hereford heifers, and that’s when they started their Forteregal herd.

‘We now have 15 pedigree cows and calves. Heifers are kept as well for replacements or are sold to pedigree breeders. Any bull calves are also kept and are reared until they are about 18 months and sold as breeding bulls at bull sales or straight from the farm.’ 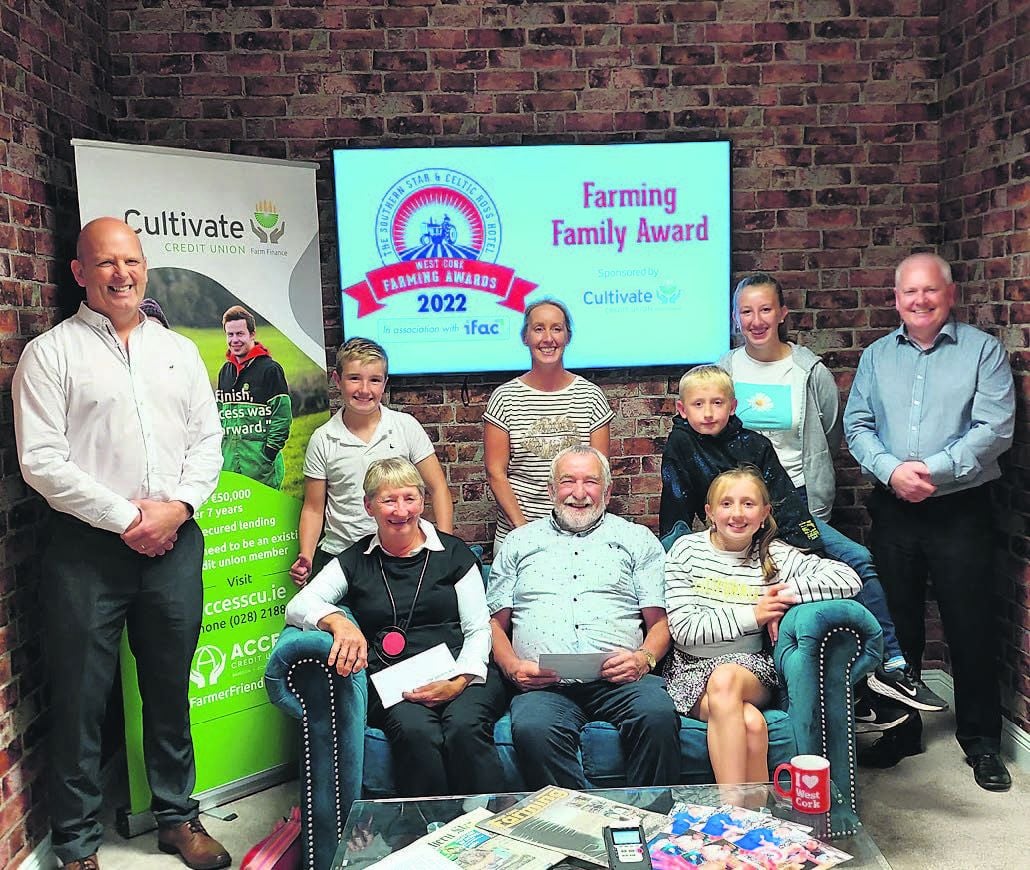 So, that’s the nuts and bolts of the farm but in no way does it capture the behind-the-scenes ‘magic.’

Call by on any given day and you’re likely to see a team of enthusiastic workers, ranging in age from 14 to just two, doing everything and anything from blocking gaps to feeding calves to helping with fencing – and loving every minute of it.

Triona and Gerard both built houses on the home place which explains the ready supply of helping hands.

They’re the kids of Triona, a 5th class teacher in Our Lady of Mercy in Bantry and her husband Liam, who is in the army.

Gearoid, is married to Deirdre, and they’re parents to two- year-old Daniel who is so into farming he already his own stick for hunting in the cows!

He works as a project engineer with Viatris in Little Island but, like Triona, is ready to pull on the wellingtons every chance he gets.

Finally, Jean, married to a dairy farmer Con, lives just 20 minutes away in Ballinagree and her three kids Conor (7), Gea- roid (5) and Síle (3) are on site every chance they get too.

With the middle generation working off-farm, including gan gan Gerard who runs his own business, Mobile Crane Services, testing cranes and lifting machinery, Saturday is the day when they all get together.

‘We all meet for breakfast in the morning before we head off and tackle the jobs. That could be anything from dosing cat- tle, testing cattle, moving animals, reseeding, fencing, power washing. It’s a case of all hands on deck,’ said Triona.

Having said that, Adam is on-site every chance he gets during the week as well, his mum said.

‘He absolutely loves his nan, and he only has to spot her in the field and he’s off out to her to see what’s happening or to go feeding cows or calves together. He’s like her apprentice!’ she said.

But it’s not just Adam who is ultra-enthusiastic: ‘Mam has given her love of farming and animals to all her grandchildren. They all love it, and they all love her. She even has volunteers for jobs like picking stones!,’ said Triona.

Along with her siblings, she gets a lot of joy from seeing all the generations spending such quality time together on the

land where she grew up. ‘All our lives are busy and the farm gives us a great reason to always come together and catch up on what’s happening in each other’s lives, while also doing actual work,’ she said.

Sheila agreed: ‘It’s a great way for all the generations to connect and I love to see them coming, and to see them get such enjoyment from it. There’s absolutely no way I’d manage without the help of everyone.”

When she’s not working on the farm, Sheila also collects her grandkids from the school bus, helps with homework and also helps to mind Daniel. It’s no wonder he’s already a dab hand at blocking a gap!

Gerard added: ‘Having been farming all my life, it is very special to see the interest the grandchildren have in farming and it’s great to see that farming tradition continue.’

When the family saw the ‘West Cork farming family award’ advertised, it immediately resonated with them.

‘Some of our best memories are on the farm, and there’s few things that can’t be sorted over a chat while doing the jobs. We really enjoy farming life and hope future generations feel the same.’

Access and Bantry Credit Unions are two of the 47 credit unions nationally that offer Cultivate loans.

From small beginnings a few years ago with four credit unions in Galway, the brand has grown rapidly and is now available in over 150 credit union offices nationwide.

We are delighted to become part of The Southern Star West Cork Farming Awards as the sponsor of a new category – Farming Family. For us, this is a match made in heaven! Nothing could be closer to the hearts of credit unions than supporting local families.

Credit unions are rooted in our communities. We employ local people to deliver local services to local communities.

The Cultivate mantra is: Keep it Local, Keep it Personal, Keep it Simple.

These characteristics have always been the hallmarks of the service provided by credit unions in the personal lending market. They have led to the Irish people having a great trust in credit unions.

For seven years in a row, credit unions have been voted number one for customer experience in the CXi Ireland Customer Experience Report.

Credit unions are now bringing these values into our growing relationship with farmers.

Nothing is more important to credit unions than relationship. Because credit unions are financial co-ops, we at Access and Bantry Credit Unions value more than anything our relationship with our members – the people of West Cork.

That’s why we are so delighted to join other leading West Cork businesses and agri stakeholders as a sponsor of the West Cork Farming Awards.

And finally, we want to shout out loudly that we also support The Southern Star and the invaluable role it plays in West Cork life and business.

• Joe Healy, is a former president of the IFA, and chairperson of Cultivate.