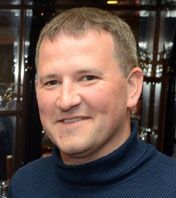 GRAHAM Dwyer allegedly discussed a plan with Elaine O’Hara to rape and murder a young estate agent, his trial has heard.

The jury of seven men and five women in his murder case heard hundreds more texts that prosecutors allege Mr Dwyer (42) exchanged with Ms O’Hara in 2011 and 2012 – including messages relating to a plan to kill Rowena Quinn.

‘Turn her over and stab her back and slit her throat,’ read one text Mr Dwyer is allaged to have sent Ms O’Hara in August 2011 – over a plot to kill the estate agent while she was showing a house for sale in Cabinteely, south Dublin.

Ms Quinn previously gave evidence in the trial of Mr Dwyer, an architect with an address at Kerrymount Close, Foxrock, south Dublin.

The father of three, who is originally from Bandon, is alleged to have murdered 36-year-old childcare worker Ms O’Hara at Killakee Wood in the Dublin Mountains near Rathfarham on August 22, 2012.

Mr Dwyer has pleaded not guilty.

The court had heard that a phone allegedly connected to Mr Dwyer had texted Ms O’Hara’s iPhone to discuss murdering Ms Quinn.

Mr Dwyer is alleged to have texted Elaine: ‘We need to plan it. We need new untraceable pay as you go phone. You make appointment to see estate agent at remote cottage. Need fake names and just say we are teachers.’

But Elaine protested, saying: ‘Sir, I think it is too close to home.’

He allegedly replied, however: ‘I think having it close is a good idea. Less chance of my car being picked up by cameras and I could be covered in blood.’

She said: ‘Okay. The thing about it being close though is there’s always people around. Just had a look at the map. Too dangerous for me sir. Too close to where I work.’

Mr Dwyer, however, is alleged to have responded: ‘I think it will be okay. Non-traceable phone. Fake names and off we go. Hammer her while her back is turned. Cover her head. Drag her into a back room. Gag, rape her. Stab her over and over. Stomach, chest, side, tits. Turn her over and stab her back and slit her throat. Then go back to yours and celebrate. Knock you up.’

Earlier, the court heard that Dwyer allegedly texted Elaine O’Hara to boast of how he had stabbed a sheep, his murder trial heard.

The jury of seven men and five women in the architect’s murder trial also heard that in the same text conversation he told Ms O’Hara: ‘I want to do a woman next.’

In one text exchange, from May 24, 2011, the pair allegedly discuss the killing of a sheep a few days earlier.

The green (G) phone texted: ‘Sorry I was keeping a low profile and leaving phone off in case there was an investigation. Animals have picked the carcass clean yay.’

G: I was up flying Sunday and had a peek. A skeletal rib cage where knife went in. Rest of sheep moved. No call to club from farmer or gardai. I want to do a woman next. It was fantastic feeling the knife going in and watch the blood spurt out. So happy. x.

Earlier the court heard that Elaine had texted a phone allegedly connected to Graham Dwyer – asking him to kill her sister, his trial heard.

And the architect’s trial heard that he allegedly texted Ms O’Hara - asking if he could abduct, rape and murder one of her neighbours.

The jury also heard hundreds of texts that prosecutors alleged Mr Dwyer and Ms O’Hara sent to each other between April 2011 and July of the same year - which included messages abducting and killing other women, including a homeless woman.

The court heard that at one point the alleged Dwyer phone, called the Green (G) phone in court texted, in response to a text from Elaine’s phone: ‘Not unless you help me get my knife into some flesh soon.’

Elaine’s phone then replied: ‘If you want you can kill my sibling.’

Another text read: ‘We do not get on and never did, so you can have her … she’s a bitch, she talks to me when she has to, and she puts her eyes up to heaven.

E: ‘Can’t happen, I’m too close. You can do it, but not see me again, I do not want to go to prison.’ Later, the jury heard texts in which there were several discussions about abducting and killing women.

The court also heard that on July 7, 2011 the G phone suggested attacking a woman who lived in the same building at Belarmine Plaza as Ms O’Hara.

The texts from G said: ‘There is an Asian girl in your building. I shared a lift with her. We could take her.’

But Ms O’Hara replied: ‘She has two kids.’

The G phone then said: ‘I am thinking of visiting a prostitute to see how easy it is to kill her.’

The jury was earlier shown videos of the architect appearing to stab women during sex – including his alleged victim Elaine O’Hara.

The jury was shown 11 video clips, with Ms O’Hara in three of them, in the absence of the public, who were asked to leave the court.

Two of the others contained images of Mr Dwyer (42) alone. In one he stabbed himself in the torso with a knife, while in the other he spoke of how he had just woken up after knocking himself out with choloroform.

The other six video clips were of Mr Dwyer appearing to stab two separate women, both of whose faces were pixilated to hide their identity. But in all three cases, the women were naked and restrained in some way.

The jury was given a warning before the videos were shown – the third day in a row that the jurors were warned about the difficult nature of the evidence about to come.

The court also heard that the videos were all created around 2008.

The court also heard that a document taken from Graham Dwyer’s home detailed a man stabbing a woman and raping her corpse.

‘I had always fantasised about killing ever since I was a teenager and I got hard every time I had a knife in my hand, wielding the power knowing that I could decide who lived and died, just like my hero, God,’ the document said.

The trial is continuing.