Lameness is one of the primary considerations, alongside mastitis and infertility, affecting a dairy herd's profitability.

A lame cow is more likely to have a higher number of days to 1st service, have more 'empty' days and have increased services to conception.

Lameness also leaves the animal more vulnerable to developing metabolic diseases like ketosis and ulti- mately exposes the animal to a higher risk of premature exit from the herd.

An Irish study in 2004 revealed, that a single case of lameness in the herd cost the farmer €300 on average.

A recent study carried out by Teagasc on Irish herds, showed that 37% of the national herd were affected by some degree of clinical lameness, not taking into consideration all of the subclinical cases.

That's a bottom line loss of €10,000/annum for a 100 head herd. This huge loss in annual income is something that should be seriously and carefully considered.

It's important to understand that cattle are prey animals by nature and their instinct is to mask any weakness until they can no longer cope with the pain.

Therefore, by the time we notice a lame cow, the animal has most likely been lame for a number of weeks already.

The greater the discomfort endured, the more the cow's performance and daily time budget is affected. 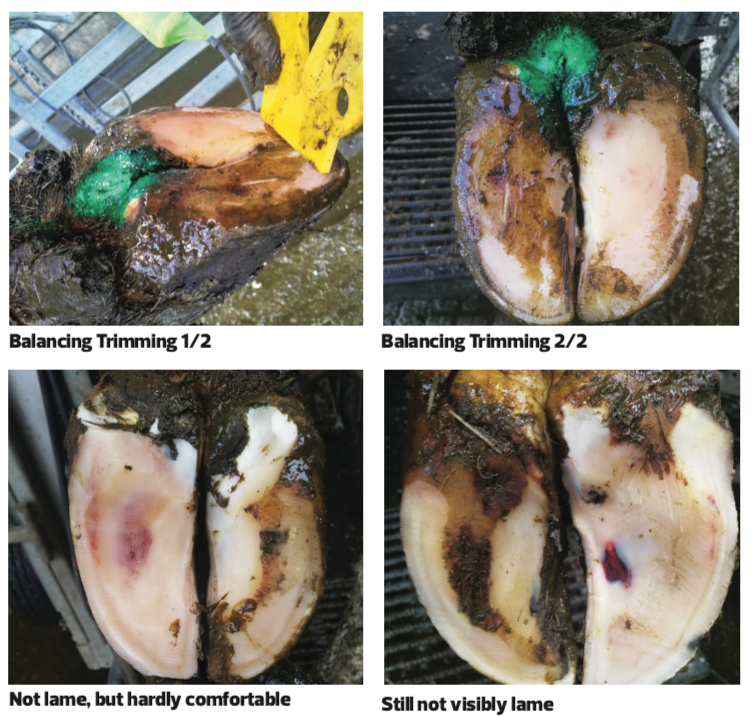 A healthy animal normally gets up 12-15 times a day to feed and drink water.

This mobility greatly reduces depending on the level of tenderness caused by such lameness.

A cow doesn't have to be obviously lame to lose production, it's enough if she is simply uncomfortable.

A cow in discomfort eats less, drinks less and rests more - all factors which contribute to a decrease in efficient productivity as well as negatively affecting her overall health and body condition.

Losing condition, the animal's fat pad in the hoof gets thinner, losing their much needed natural cushioning.

This way the pedal bone gets the full impact with each step, bruising the soft tissue between the bone and the sole of the hoof and potentially leading to the development of sole ulcers and worsening the degree of lameness.

A replacement heifer has to serve 1.5 lactations to essentially pay for herself and it's only after this point she starts making any profit.

The current replacement rate on dairy farms is over 25% meaning, if you're keeping a 100 animal herd, less than 75 of them are actively making a profit. Reducing this rate should be the number one goal from both business and sustainability point of view.

It is widely accepted that there is not enough emphasis put on hoof care and regular hoof trimming as there has been on other modern dairy practices.

In other words, meaning that the current reactive approach of treating lame animals only, is outdated and inefficient.

It might make the animal feel better, but the damage is done and your cow's profitability is already affected.

With even more considered husbandry, a strict foot bath routine and scheduled professional hoof trimming and balancing it is possible to reduce lameness within the herd and keep it below at least 5%.