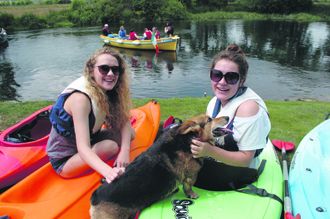 A PLAN to develop West Cork as a hub for outdoor pursuits was raised in the Dáil last week by Fine Gael TD, Jim Daly, who also raised the matter with the Minister for Public Expenditure and Reform, Brendan Howlin.

Mr Daly called on the Minister of Transport, Tourism and Sport, Paschal Donohoe, to prioritise funding for the initiative.

Mr Donohoe acknowledged that there is a huge level of interest in walkway and waterway projects, which are known as ‘greenways’ and ‘blueways’.

He assured Mr Daly that should funding become available he would prioritise these projects – not just in West Cork, but also throughout the country because they have been proven to be a success.

Mr Daly also met with Minister Howlin and impressed upon him the need to have the West Cork greenway and blueway projects included in the Government’s next stimulus plan – an initiative that is not expected to be announced until later this year.

The West Cork TD also indicated that he was hoping, within the next two weeks, to announce the establishment of a working group, consisting of representatives of a range of activities and locations, to help develop the concept of West Cork as a hub for outdoor pursuits.