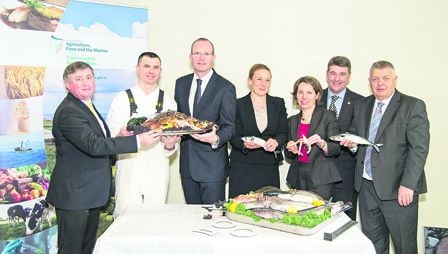 IRELAND’S seafood sector received a welcome financial boost last week with the announcement by Minister for Agriculture, Food and the Marine, Simon Coveney of a new €241m development programme for the sector, for the period up to 2020.

The new programme will be co-funded by the EU through the European Maritime and Fisheries Fund with the EU providing €150m, and the remainder provided by the government

Seafood is widely recognised as a high growth area of our economy, with the potential to grow to €1bn by 2020.

This investment package will provide the capital to assist seafood enterprises to sustainably grow their production, add value to our seafood exports and create much need employment in our coastal communities,’ said Minister Coveney, speaking at the launch in Clonakilty.

A further €6m will go into reviving and growing inshore fisheries while €30m will be invested in developing the aquaculture industry. A total of €12m will go to local action groups to grow seafood economies and €41m will be directed towards growing markets for seafood products and developing seafood processing industry. An additional €10m would support the implementation of EU environmental law.

Fine Gael TD for Cork South West, Noel Harrington has also called on the members of the public to contribute suggestions by May 1st.

‘I commend Minister Coveney on the work he has done in this area and I again appeal to those in the seafood industry to review the proposals and to have their say in how this essential funding is spent,’ said Deputy Harrington.

‘The industry has got to be one step ahead in every area of production.

‘To achieve that edge we absolutely need access to public funds. The rest of Europe is certainly taking advantage of them, but we also must have an educated, responsive, flexible and co-operative licensing regime,’ said Mr Flynn.