West Cork has seen many waves of invasions over the centuries – Vikings, Normans, Brits, Norries, cheesemakers, basket weavers … you name it, they’ve all come here.

It’s fair to say that we are used to sharing our beautiful home with ‘blow-ins’ of all sorts. And share it we do, with a tolerance not seen in many other locales, usually until the newcomers have become ‘more West Cork than the West Corkonians themselves’.

In Star Trek, I believe it’s known as assimilation.

Unfortunately, this year we’re dealing with a totally different sort of invasion, an invasion on four or more wheels, more insidious than any influx of African hornets or moon jellyfish.

Yes, ladies and gentlemen, I’m taking about the invasion of the camper vans which have now reached epidemic levels on the highways and byways of West Cork.

They are regularly clogging up car parks at local beaches.

Reportedly, five of them were stationed in little Lough Hyne one recent weekend morning which is against bye-laws because it is a nature reserve. There are even reports that the camper vans themselves have become sentient and are beginning to self-replicate and conspire against their owners. Soon, we will all be their slaves.

On RTÉ Radio One’s Liveline, there were complaints that some camper van owners, lacking the ‘chemical toilet discharge’ facilities for emptying their toilets, are emptying them freely around beauty spots.

The Wild Atlantic Way doesn’t need to be that wild, lads. In one way, it’s all a product of our very strange moment in history.

With outward travel restrictions, it’s lovely to see people taking the opportunity to explore the almost endless beauty on their doorsteps. And in such a short time, it’s not fair to expect the infrastructure to adapt to our new itinerant urges.

You’d wonder, though, will there be a surge of post-pandemic camper van sales on Done Deal when people realise the effort and commitment required in owning and operating one? I even came across one on the motorway to Dublin this week, towing a small electric car behind it, presumably so the owners can nip to the shops and go sightseeing without losing their pitch.

All they were missing was the helipad. Give me a nice hotel any day of the week. 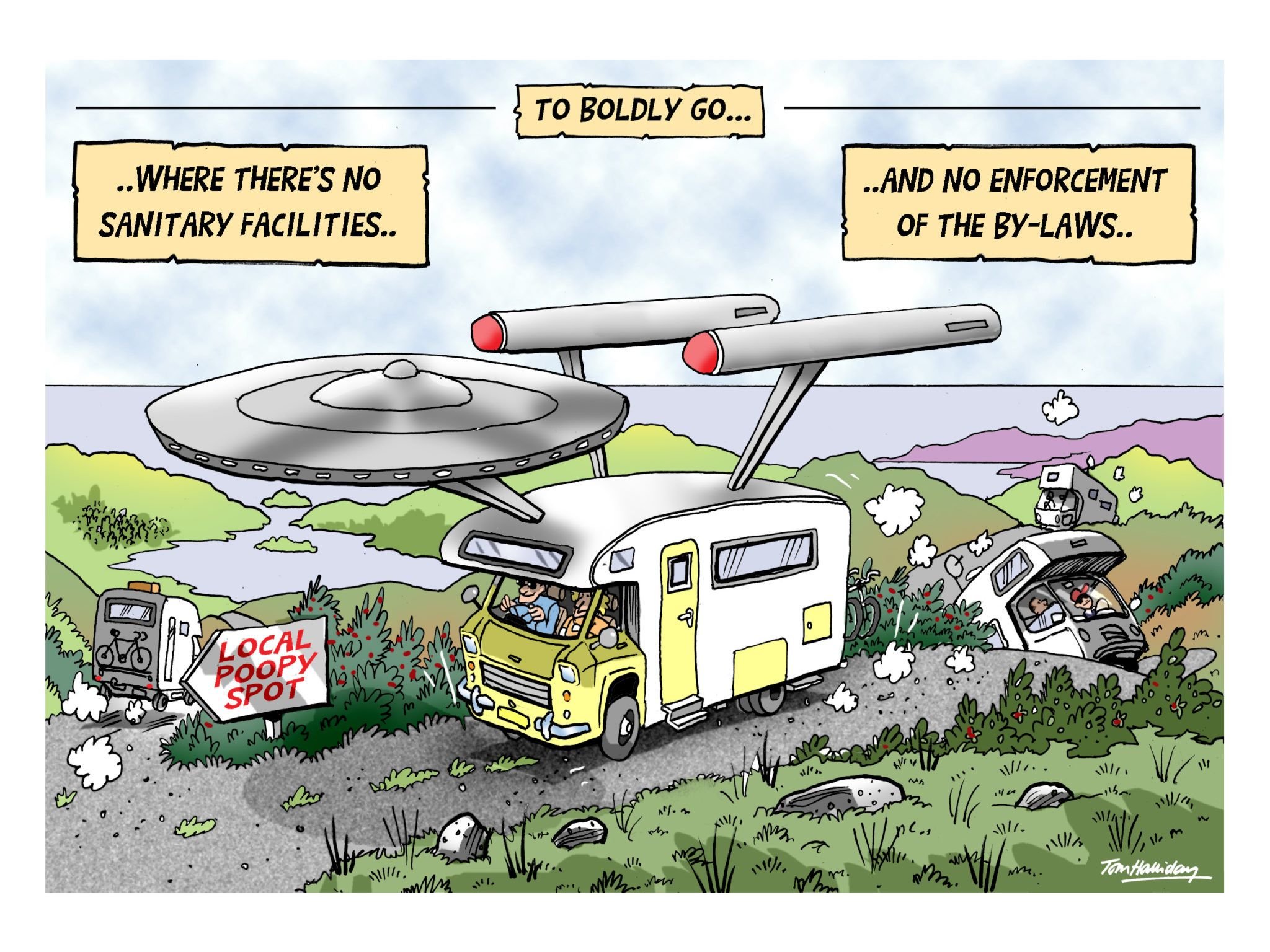 Eccentric ways of moving around the world, and indeed outside it, were very much on display amongst the billionaire classes this week.

Facebook ceo Mark Zuckerberg posted an Instagram video of himself waving the American flag while riding an electric surfboard across the ocean.

This was all in an effort to celebrate the 4th of July, as John Denver’s anthem to West Virginia, Take Me Home, Country Roads played in the background.

I’ve never felt the urge to throw a sheep at someone so badly.

Meanwhile, Virgin Galactic’s Richard Branson seemingly has plans to beat his fellow billionaire Jeff Bezos to space on a test spaceflight that will launch on July 11th. Amazon founder Bezos was initially earmarked to win the race, with his company Blue Origin set to reach suborbital spaceflight on one of their own companies’ rockets for the very first time.

It’s all a bit ‘my willy is bigger than yours’, isn’t it?

With a part of the Gulf of Mexico literally on fire this week due to an oil spill and a global vaccine rollout falling well short in developing nations, I can think of a few better ways for them to use their billions.

On the plus side, maybe they’ll all stay in space.

Bring me a higher love

Most of us were glued to the England v Denmark game in Euro 2020 this week. I noticed something strange happening to me during this recent competition. In times of old, I would have watched every England football match with a typical Irish outlook.

I wanted them to be obliterated and humiliated in front of my eyes and the ridiculously high expectations of their supporters dashed until the next competition where it would all start over afresh.

They were truly the gift that kept on giving. Now, with the young fella tuning in for his first international football tournament and beginning to show a real interest, I’m trying to ‘go higher’, as Michelle Obama might say.

Therefore, on the face of it, I am vocally supportive of this England team, which is full of truly admirable young players and an equally impressive manager.

And who wants to pass on any sectarian anti-English nonsense to their kids?

However, I have to confess that thirty seconds into the game, deep down inside the core of my soul, around 800 years down I’d say, I was secretly willing their failure at every turn.

Going higher may just be a job for the next generation, there’s little hope for me.