A SMALL spot of paint started peeling on our bathroom ceiling back in 2014 and I did everything in my (very limited) DIY powers to get rid of it.

I tried repainting it multiple times. I tried sanding down the plaster and painting it again. I tried prayer. But, like Micheal Myers in the Halloween films, whatever I did to get rid of it, the paint just kept peeling back.

In the intervening years, I’ve completely given up trying to find a solution and I’ve simply accepted this minor imperfection as part of the household. I’ve even christened it ‘John Peel’ and keep a photo of it on my desk, next to my children’s. Which is a long-winded way of saying that, as I approach middle age, I have come to accept that sometimes perfection is the enemy of the good.

And this is exactly the phrase Stephen Donnelly used when he appeared on Prime Time last week to try to reassure the nation about Ireland’s stuttering vaccination rollout. The rollout has been far from perfect, but with a marked decrease in hospitalisations and deaths in recent months, it would give you a certain amount of hope for the months ahead.

You’d nearly be forgiven for mentioning a ‘meaningful August’. Whatever transpires, you get the sense that Mr Donnelly’s political future, and indeed the very future of his party, will rest on the perceived success or failure of this rollout over the coming three to four months.

Given the high stakes, I was surprised to read on Monday morning that the minister had been querying internally why his name was not being mentioned in tweets posted on the Department of Health Twitter feed, when officials seem to have been more than happy to mention Tony Holohan and Simon Harris on previous occasions. Awkward. 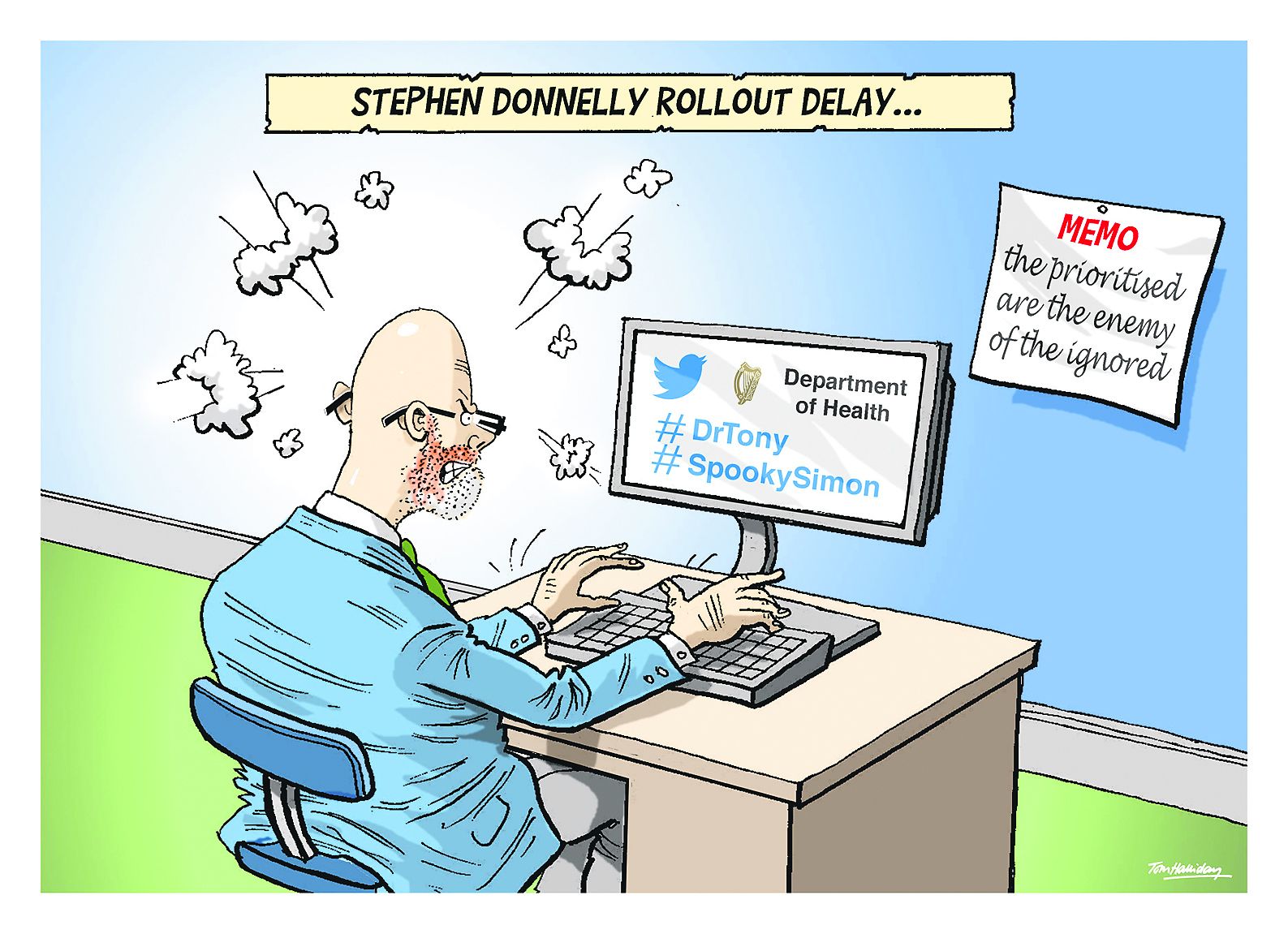 The best of a bad situation

IT”S been a gruelling first few semesters for Minister For Education Norma Foley as well, after what has been the most disruptive of school years.

With children back in their classes now, the call for teachers to be prioritised for vaccination has grown louder, and understandably so. Teachers have been making big sacrifices on the frontline and although outbreaks in schools are statistically less likely, nobody would wish to be packed into an airless portakabin with a load of grumpy teenagers right now.

So few would begrudge them skipping the queue, right? Apart from the gardaí perhaps. Or all the frontline supermarket workers. So, although the plan to offer the remaining vaccines on the basis of age may not be perfect, it might be the ‘good’ solution in this case. Or so my old friend John Peel tells me anyway.

Reeling in the tears

Reeling In The Years made a comeback on Sunday night featuring the year 2010 and aftermath of the bank bailout.

It’s kind of amazing to be looking back on the bankruptcy of the nation with a sort of wistful nostalgia but I guess ‘we are where we are’.

The other story that popped out at me, and one I had completely forgotten about, was the heroic rescue of thirty-three Chilean miners after 69 days trapped 700 metres underground. I was surprised I hadn’t heard anything since about the lads, but then I was reminded that miners often don’t go on to achieve success at senior level (I’m here all week!).

Despite all his gaffes and the post-colonial baggage, I was sad to read that poor old Prince Philip popped his clogs there last week. Ar dheis De go raibh a anam. It is good to know that the old chap kept his sense of humour right to the end as it emerged that he personally helped design a lime green Land Rover to carry his hearse.

And he gave instructions that the vehicle would be flanked on the day of his funeral by pallbearers from the Royal Marines, regiments, corps and air stations and, according to a royal source, he wanted ‘the minimum of fuss’. Quite.

It felt like glass ceilings were being shattered willy nilly over the weekend. Rachael Blackmore made history again with her amazing achievement at Aintree coming only a month after her ground-breaking wins at Cheltenham.

A former Provost of Trinity, George Salmon famously said in 1895 that ‘Over my dead body will women enter this college’ and now, finally, he’s been succeeded by one.

So, another great day for Irish women.

And perhaps even more significantly, Prof Doyle is from Cork. So, put that in your pipe and smoke it, old George.