Sexton’s Caravan Park in Timoleague has been full of caravans, motor homes and tents after reopening at the end of June for the first time this year.

The campervan and the tent are having a revival this year as families realise they offer flexibility and a safe haven which can reduce concerns over sanitising and hygiene, as Martha Brennan reports

CAMPING seems to have had something of a revival in West Cork this year.

If bookings at local campsites are anything to go by, a booking on a site – especially coastal ones – are making it to the top of many staycationers’ wishlists.

Local campsite owners say they are mostly booked out, from now until September.

Campervan parks from Kinsale to Beara are seeing unprecedented interest from people choosing to holiday at home this year, especially first-time campers, and some are having to turn bookings away.

‘We’re only open two weeks and already booked up until the end of August,’ said David Jennings of Desert House Camping Park in Clonakilty. ‘We’re usually busy for the summer, but it’s been exceptional this year. A lot of Irish first-timers bought campers when lockdown started and are booking in West Cork.’

Barleycove Holiday Park is also full for the summer, turning down nearly 50 bookings a day. Like Desert House, their bookings are mostly from Irish visitors, including some from Northern Ireland.

Mickey Dowling of Glengarriff Caravan and Camping Park has had a similar experience. ‘We’re definitely busier than normal in terms of Irish bookings, and people coming down from the north,’ Mickey said. ‘There are also more people coming to West Cork from Dublin. Prices have shot up everywhere and people are looking for somewhere new.’

Mickey said that a lot of people who would normally go to a hotel, are now trying out camping because of hygiene concerns, prices or just to try something new. Those who might usually go camping in France or Germany are also now coming to West Cork.

The campsite owner also noted that while he has received a lot of emails from people in England, he will not be taking bookings from abroad this year because of Covid-19.

Colman O’Sullivan of Eyeries Motorhome Park said he’s also had some enquiries from England but is taking bookings mostly from the Irish. ‘The phone does not stop ringing morning to night,’ Colman said. This is his busiest season yet, with more people looking to explore the Ring of Beara than ever before.

‘Covid has driven the Irish market crazy, people can’t even get campervans at the moment,’ Colman said.

‘Many feel safer in their own spaces, rather than in hotels. It’s a good option for people right now.’ Many are also turning toward ‘glamping’ this year, where people sleep in designated pods rather than tents. The Top of the Rock Pod Pairc in Drimoleague is booked through to September and Ardfield Mountain Escape’s ‘posh tenting’ dome is proving equally popular. Mountain Escape only opened last month, but Conor Hegarty said bookings have soared. ‘Many families are travelling together or are using this opportunity to get back into camping,’ Conor said. He is also sticking to Irish bookings, with people coming from Cork city, Limerick, Tipperary and Dublin. ‘We have to help some first-timers with tents, but everyone is just so happy to be out,’ he said. ‘They go to the beach or the playground and the local pub is back open. I think people didn’t realise how much they missed being out, and this is a safe way to do it.’

‘We can easily change our route as we need’ 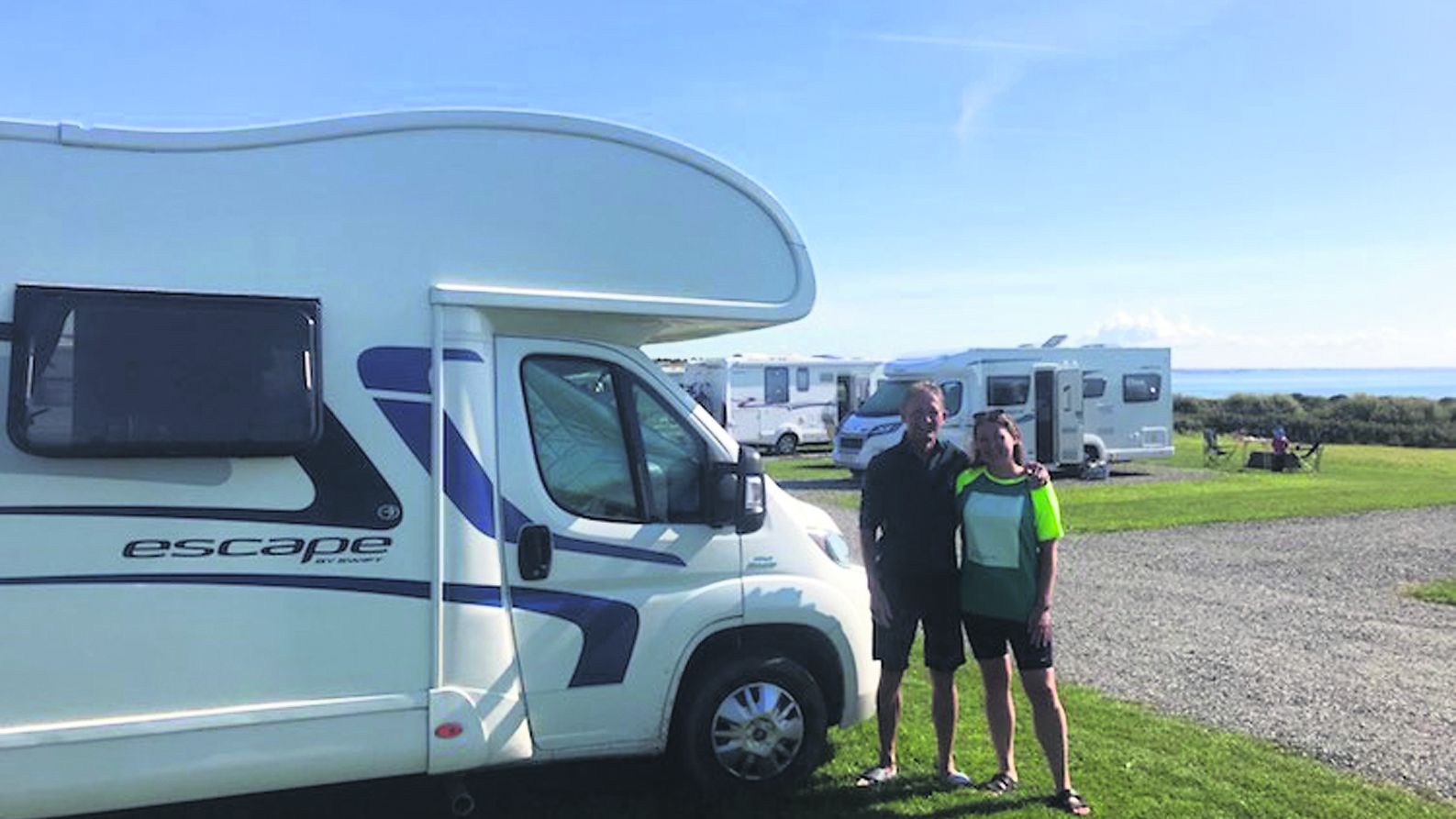 Caoimhe and her father Frank on a recent trip

Caoimhe Hill’s family are getting more use out of their campervan this summer than ever, taking it from their home in Kinsale to safely visit family in Skibbereen as lockdown eased. Packing up to go on their holidays across West Cork last week, Caoimhe said it’s the flexibility that draws them to camping.

‘We can easily change our route as we need, and there’s space for the whole family,’ she said.

‘When we need more space we can just set up tents wherever we land.’ Caoimhe’s father is a GP, so the family feels better staying in their own quarters than in a hotel.

‘My parents always wanted a camper, they travelled the US in one years ago and now we all love it too. It’s just easy and you have more freedom than if you were booking hotels, especially with everything going on at the moment.’