That’s a major shift from just three or four years ago, when diesel was still king of the road. Now electrification is king, in various forms.

While pure electric reviews – after this week’s article – represent three cars in ten that I’ve driven, the actual proportion of cars sold this year is 8pc, so my review numbers are somewhat ahead of the real world. But 31pc of my cars does show just to where the industry is driving.

For this week I’m in the Peugeot e-208. In terms of style, if there is a sweeter-looking supermini out there, I haven’t seen it.

A perfect example of that design roll which the French carmaker is on at the moment.

An in-your-face front that is nevertheless the epitome of Gallic elegance.

A smooth and sexy profile, and a rear that’s distinctive and smart.

The large blue ‘e’ in the rear quarter panel is an uncompromising statement of the car’s electric credentials.

Size-wise the 208 is slap in the middle of a truly competitive segment, the smallest being the Mini, the largest the new Fabia.

Headroom in the rear is good, though legroom behind me as the driver might be a little tight. But the car is well sized for its space, and the style is for the younger single, or a couple without a legion of kids to shuttle.

The driver’s instrumentation is smart, the main ones sitting high above the quad-shaped steering wheel in current Peugeot ergonomics. 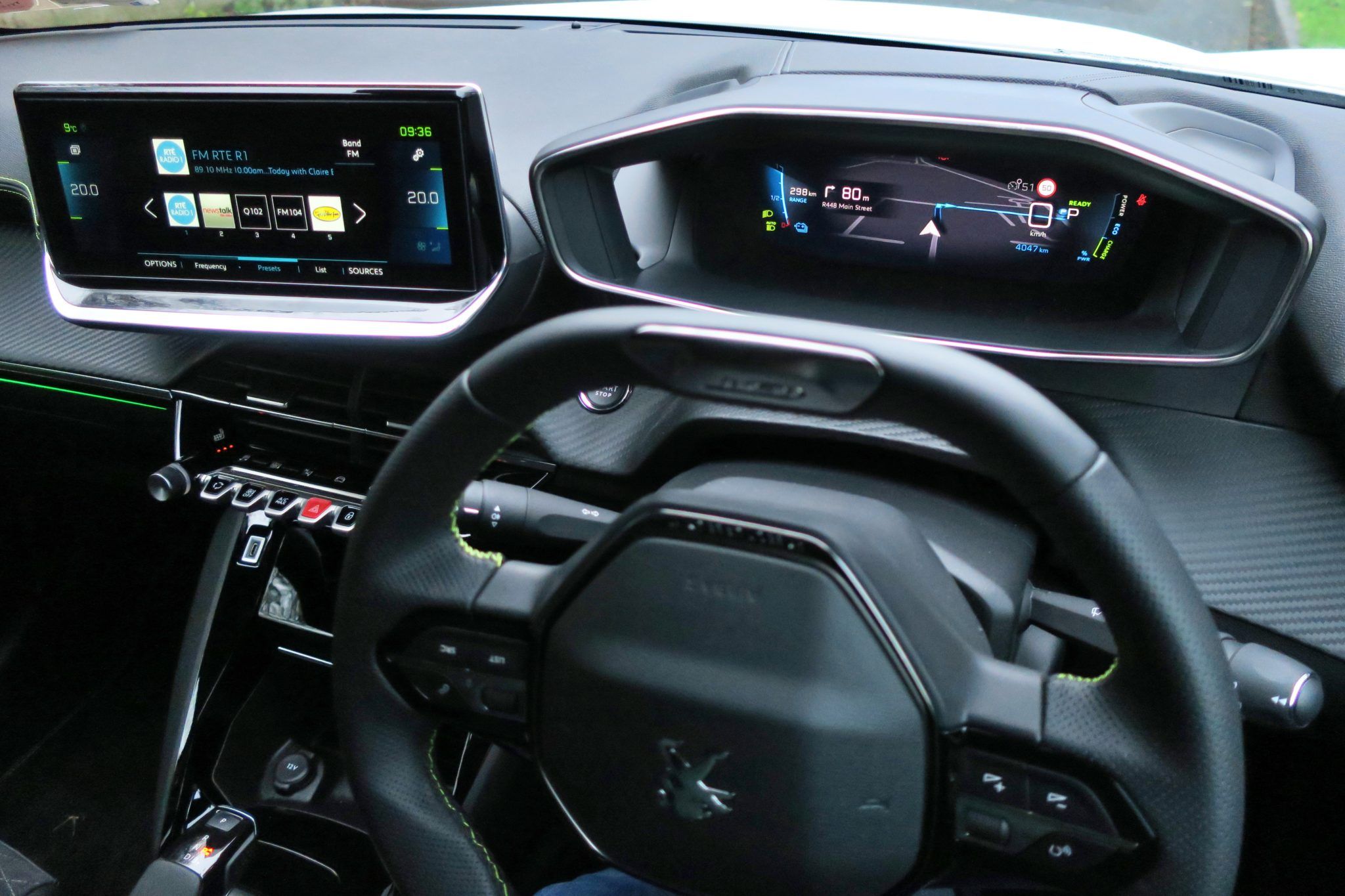 It has the latest 3D-effect display, and a selection of view options to suit any owner’s temperament or frame of mind at any given time.

There’s a decent but not overbearing centre screen for the navigation, entertainment, and climate management.

Under it a double row of switches, one row touch-operated, the other piano-style. It does take a little time to get used to tapping on the right row.

Though the climate is touch-screen, at least the graphics are simple and large, not too distracting to manage.

The electric drive system is the same as in all the Peugeot, Citroen, Opel, and DS cars in this segment, so it’s pretty familiar to me at this stage.

The range is rated at up to 340km, though the experience of myself and colleagues is that 300km might be closer in real world, certainly at this colder time of the year.

And that’s fine if you own the car and have a wallbox charger so that you leave home every morning with that range on board.

I actually nearly got caught out for the first time in all my electric review cars when I headed out for a 160km round trip unexpectedly with ... 160km on the remaining range. Because it was all motorway, even though I kept the speed down to 110km/h, it was only because I did a booster charge while we were at the shops that I made it home with 10km range to spare. 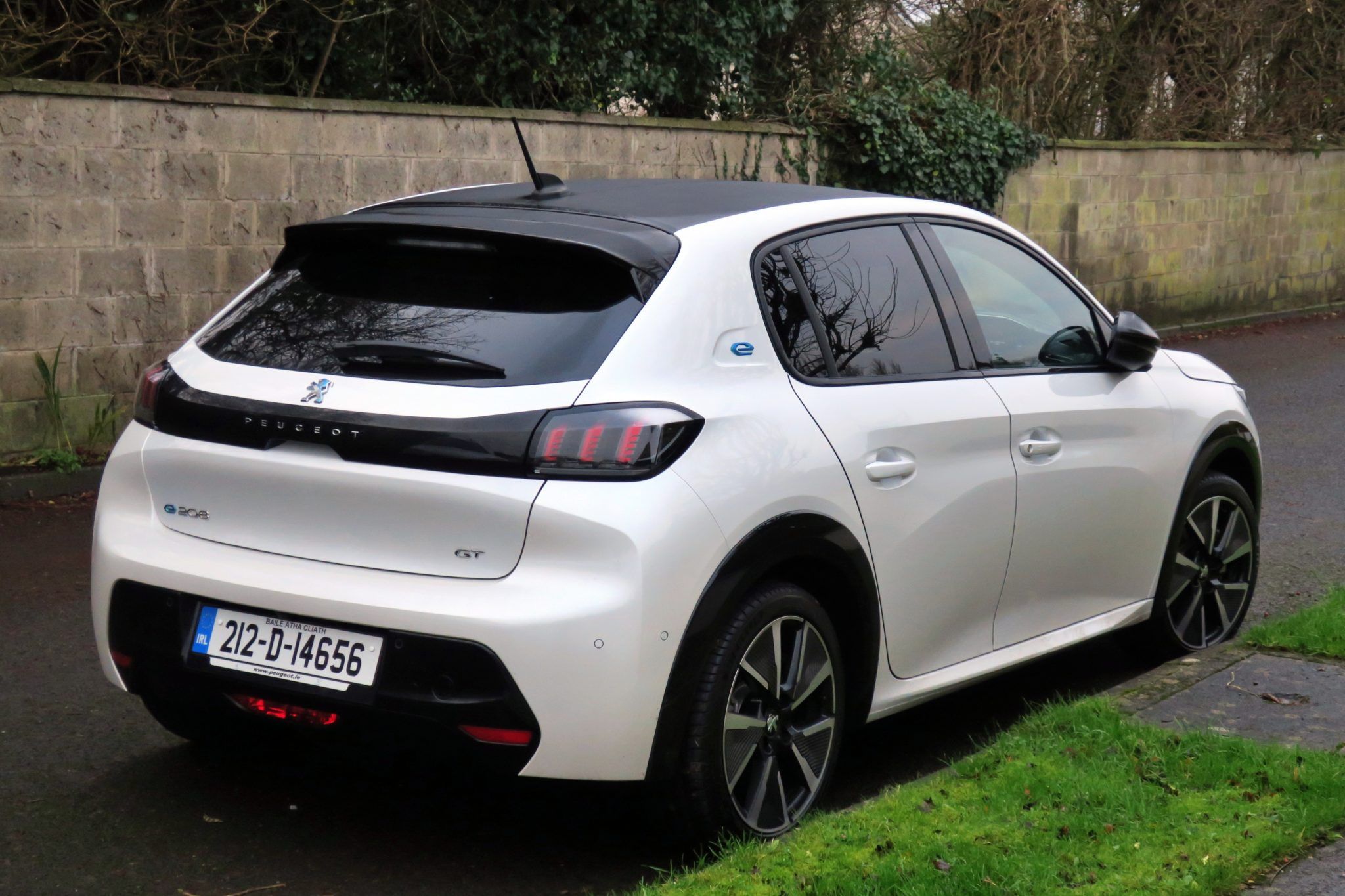 Charging options include the 13 amp lead for a domestic socket, which takes 16 hours to 80pc in my own experience last week.

An 11kW wallbox home unit will give a full charge in five hours, perfect for keeping it topped up overnight. And if you do need to go on a public charger, a 100kW fast charger will go from 10-80pc in 30 minutes.  A full charge at current prices will cost around €13.

The drive itself was typically smooth, perky when acceleration was needed thanks to the 136hp and substantial torque. Though the battery makes it heavier than the petrol version, there was no noticeable stodginess in the handling. Altogether, a likeable option for those whose driving requirements suit the e-208.

What I like:   It taught me a lesson about keeping it charged overnight.