THE latest Kia Sportage is the fifth generation of the model with that name, though only four of those have been really relevant in Europe.

It was when the third generation arrived in this part of the world in 2010 that the model really came into its own. Five years later, the version which has recently been superseded, cemented its position as a successful and appreciated crossover in most markets.

Since Kia’s renaissance here in Ireland in 2004, the brand and its products have been built into one of the most respected in the country. 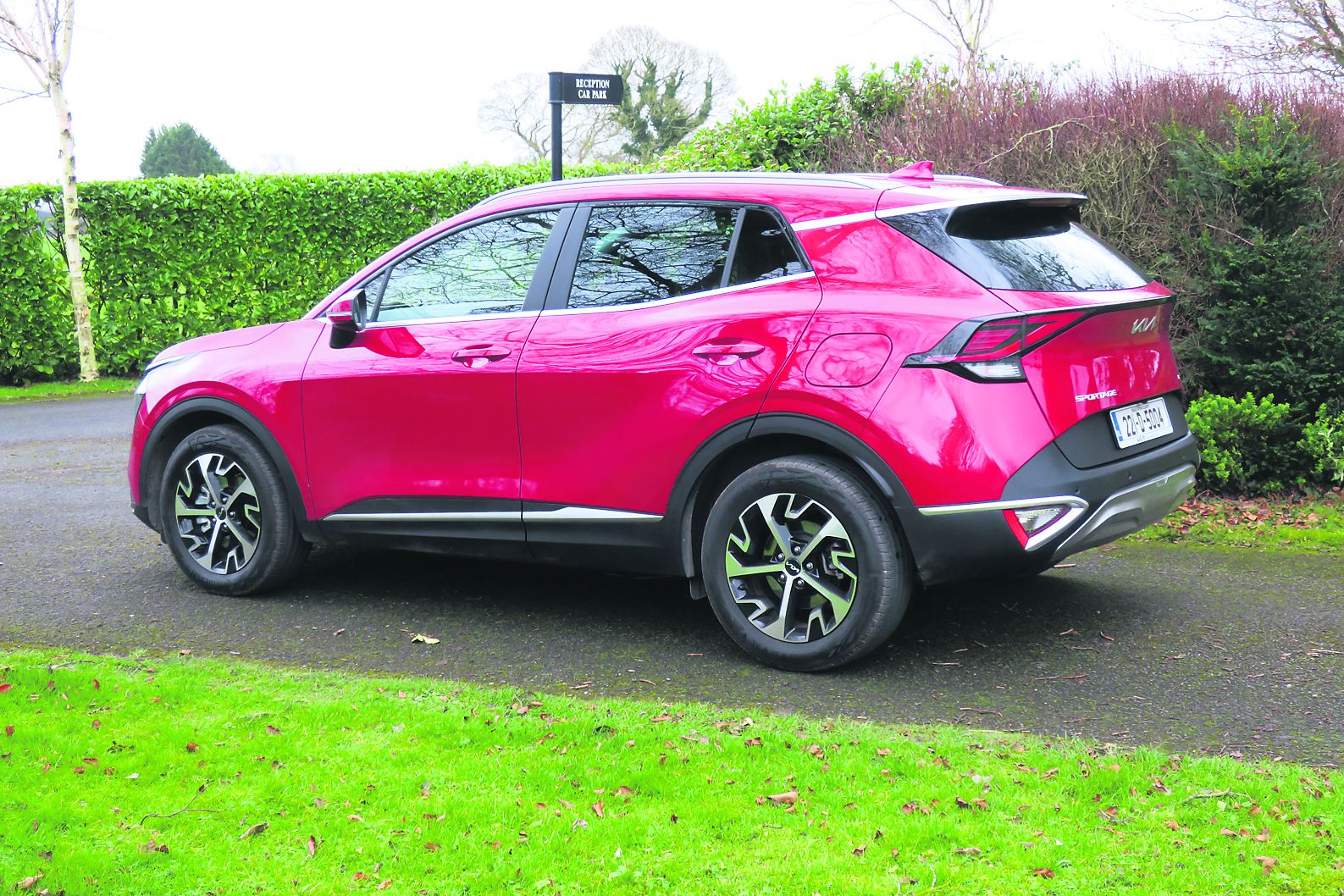 When the Sportage joined the range, it quickly became the best seller for the Irish company. It remains so, and so far this year it represents more than 40pc of all Kias sold here.

A substantial increase from the 35pc last year, and in conjunction with the big sales of the EV6 electric car, has contributed to a record first quarter for the company.

I have been very positive about the previous two generations of Sportage. So the new one had much to live up to.

A quick first drive impression of the car when it arrived here last February certainly suggested it would. And I can confirm, after a more extensive experience recently, it has.

The new design is much more in-your-face than the previous cars. Which might have been a problem for me, as I tend towards smoother looks and svelte than a startling image. Even now I’m still a little hesitant to love all the detail of the front of the car. 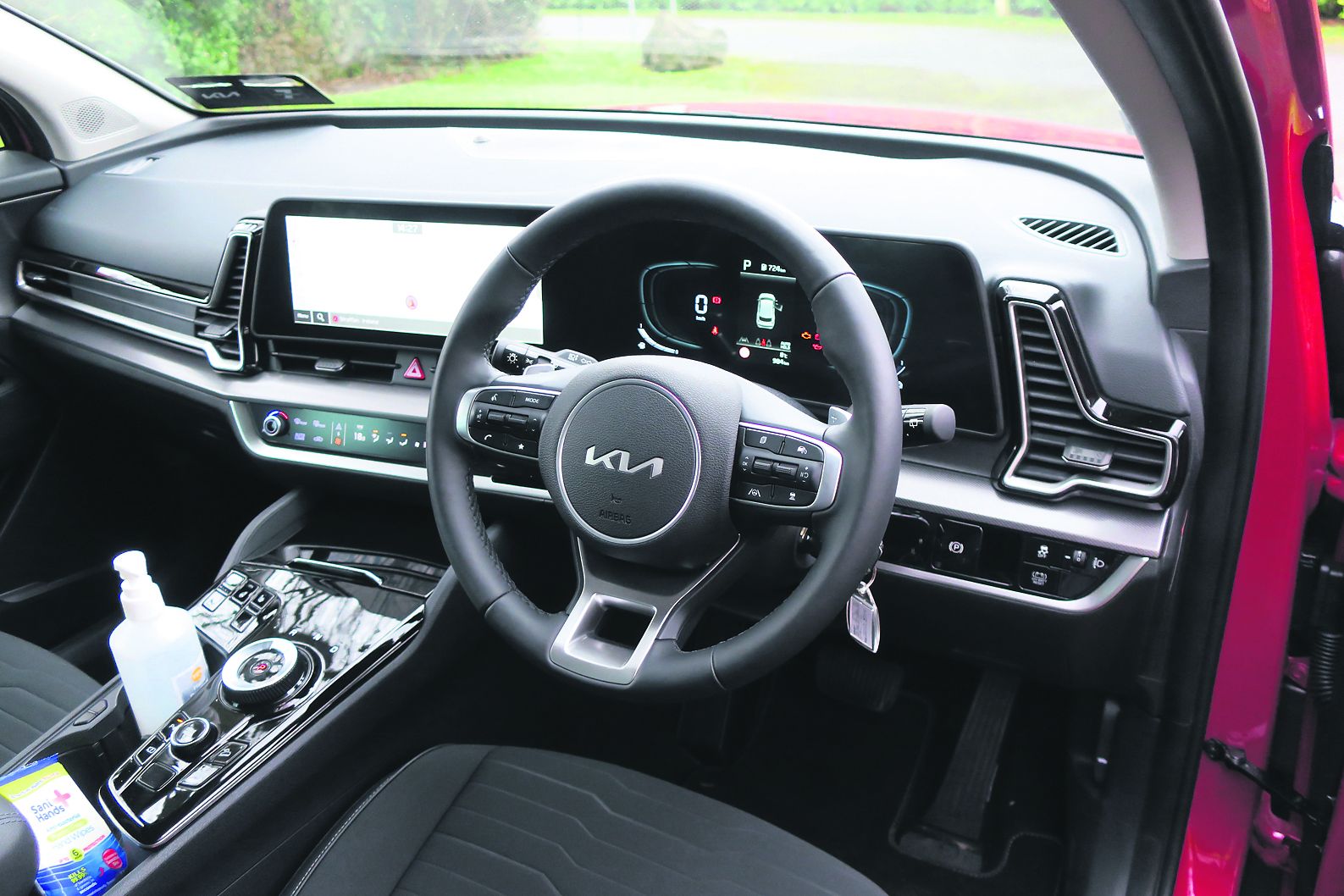 But it’s growing on me. It certainly prompts other motorists to take a second look, all angles and glister and a more pugnacious grille. It is in line with the current Kia trendline, and certainly fits with the highly modernised logo introduced last year.

The upstyling extends all through the rest of the car, with the crossover’s rear design aligned with that of the EV6. It flows and it flies. So we know where all Kias are heading.

The inside changes are less dramatic, but substantial. The new dashboard incorporates a wider centre infotainment screen and its housing merges into a driver’s instrumentation where simplicity and clarity are the key design elements.

An extra strip under the infotainment carries touch-digital ‘buttons’ for climate and other functions management. I don’t like it, it’s too low down and also requires to be tapped into different modes. The centre console carries a number of useful switches, and in automatic versions of the car a rotary selector knob.

The satellite controls on the steering wheel are again clear and straightforward. Overall, a good nine out of ten for ergonomics.

The latest Sportage is on a new platform which provides more luggage, legroom and headroom than the previous version. It was always comfortable. It’s more so now.

The car comes with new and improved powertrains, including hybrid and mild hybrid petrol engines. There are also two diesels, and a plug-in hybrid is imminent. The four grades are all highly spec’d from the lowest, moving up through them brings incremental extra convenience and technology upgrades.

One of the most thoughtful items is very low tech. You know when you get into many cars and then find it difficult to reach the interior door handle to pull it closed? Well, in the new Sportage there’s a smaller and closer to hand moulded section on the door that is easily reached. A small but big thing which shows Kia designers are listening to the small complaints.

I have driven the hybrid, and my review car for this week was the diesel with manual transmission. The 115hp was plenty adequate for my normal motoring and the gears shifting was, as always in recent Kias, perfectly smooth and light. There’s a top-of-the-range 136hp diesel which comes with a manual that has no clutch pedal. Story for another time.

The overall driving experience was as would be expected, comfortable, easygoing, and quiet, even with the now-rare-among-press-cars diesel. Visually I’ll get used to the dramatic front styling as, inevitably given the car’s place in Kia sales here, I’ll be seeing many more of them