Members of the Western Committee have complained about the delays in dredging around the pontoon in Courtmacsherry, but there is also a larger problem in the bay area.

PLANS to carry out dredging works in Courtmacsherry has become ‘a joke and an embarrassment to us as public representatives,’ according to a local councillor.

In fact, he said, ‘I’m furious, really. We are making a massive job out of something that is very straight forward.’

Cllr Paul Hayes (Ind) complained at the Western Committee meeting that every deadline for the project has been missed.

In the meantime, he said the life-saving RNLI service has to refuel off a badly listing pontoon, while row boats, leisure craft, fishing vessels and whale watching companies are struggling to operate under the silted-up conditions of the bay.

The issue was hotly debated at the November meeting and again at the online meeting in the new year. Cllr Hayes even posted photographs showing how the pontoon is twisted due to the build-up of silt.

Cllr Patrick Gerard Murphy (FF) said all of the proposed projects have been dragging on for years and he asked for the dredging in Glengarriff to be listed in works proposed for 2021. Cllr Hayes confirmed that the issue has been on their agenda for five years.

Cllr Hayes said the silting-up of the channel in Courtmacsherry harbour gets worse after each storm, but the removal of sand and silt by landowners is no longer permissible because it has been designated a Special Area of Conservation. 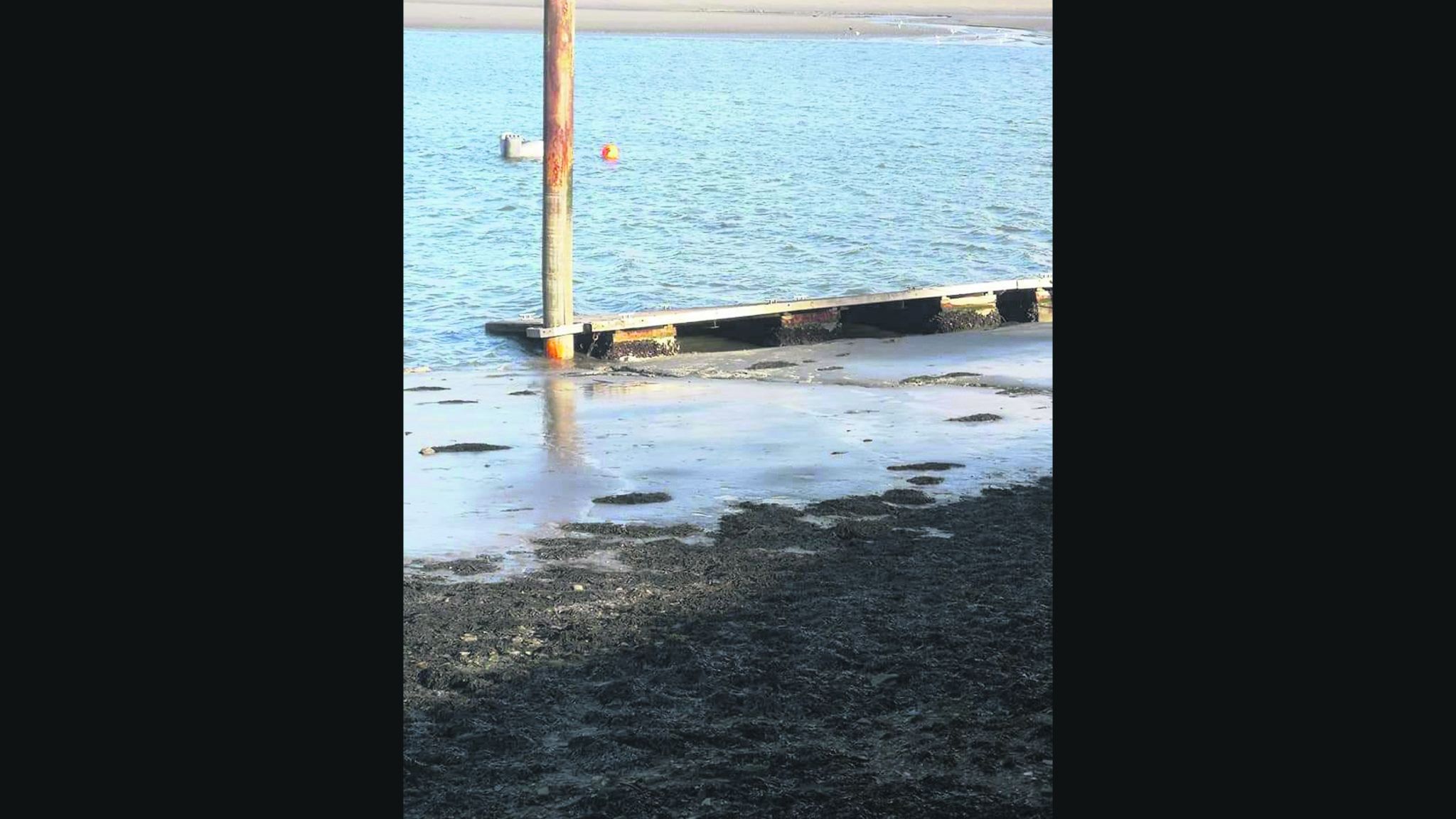 The badly listing pontoon in Courtmacsherry.

County engineer, Kevin Morey said the local authority ‘shared an element of frustration’ but he said all of the formal processes relating to foreshore access had to be completed. He said the Council is trying to find ways of categorising the pontoon for ‘urgent intervention’ as a means of moving the project on.

Mr Morey reminded the councillors that the Council is ‘subject to a high level of scrutiny’ and that the ongoing process to apply for the foreshore licence is not a routine application. He said he was ‘confident that the Council will get our permission to act this year.’  However, he warned them that the silt material that has to be taken out is going to have to be disposed of using ‘a specialist treatment.’

The county engineer assured the councillors that the local authority is in direct contact with the department on the issue. ‘It’s not just sitting there in a queue,’ he said.

Council engineer Kevin Costello told the councillors the Council was making every effort to expedite it and the Council was determined to carry out dredging this year if at all possible.

RNLI HAS TO REFUEL OFF LISTING PONTOON

A BRACKET holding the pontoon at Courtmacsherry in place has broken, according to Cllr Paul Hayes (Ind).

The councillor shared a photograph of the broken bracket with Council officials at a recent online meeting of the Western Committee.

‘It became weakened and stressed at low tide over the years and now the entire pontoon is breaking apart. It means the final repair job will be more expensive,’ he said.

At the previous meeting of the Western Committee, Cllr Hayes was critical of the delays with dredging around the pontoon and told officials that the life-saving RNLI service is now having to refuel off a badly listing pontoon, while row boats, leisure craft, fishing vessels and whale watching companied are struggling to operate under the silted-up conditions of the bay.