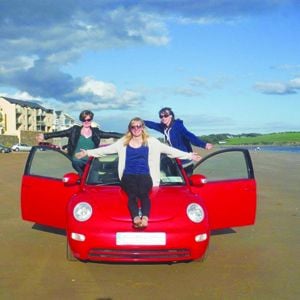 Bebeanne, left, with Corinne and Gina, and ‘Hairy Coo’ the red VW Beetle on yet another beach! Below: at various stops on their epic trip around Ireland’s top attractions

IT was a mammoth trip around Ireland in a red VW Beetle by three friends that took in 12 counties in 12 days, needing three refuels and covering 1,168 miles. And given half a chance, they’d do it all over again.

What’s more, the idea stole the hearts of many who watched the trio’s journey as it unfolded on social media.

The all-girl roadtrip was the brainchild of Bebeanne Carey from Skibbereen, Corinne Stubbington from Portsmouth and Gina Wallace from Wexford.

The trio of close friends are well used to travelling together around Europe – but this time they decided to travel around Ireland and document it in a dedicated Facebook page.

‘Gina had this trip on her bucket list and we said back in April that we would do it in my red Beetle, known to many as ‘Hairy Coo’. We planned out where we were going and booked hostels along the way,’ said Bebeanne.

Bebeanne, whose day job is as a graphic designer with The Southern Star, volunteered to be the designated driver for the trip, which was loosely based on the Wild Atlantic Way route – with some eastern counties thrown in for good measure.

‘We had an amazing time and lots of people we met along the way were fascinated by the idea of driving around the country for our annual holiday. The best thing is that it’s not that expensive to do – as we only had to fill the tank three times over the whole trip.’

From the wildness of Mizen Head in West Cork to the impressive Giant’s Causeway in Antrim, and haunting memories from creepy Loftus Hall in Wexford among the highlights, there was even some time for a little rollercoaster madness at Tayto Park in Co Meath.

‘What was also great was meeting some amazing people on the way – especially the staff that work in some of the attractions, like the Titanic Museum Belfast, the Doolin Caves or Loftus Hall,’ recalled Bebeanne. ‘They were all so enthusiastic and welcoming. I would recommend anyone to take the time out to do a trip like this – we got to see most of the top sights that Ireland has to offer.’

Of course, this summer’s weather wasn’t exactly perfect for a road trip, but the girls refused to let it change their plans.

‘You’ve got to keep going, even it’s raining, and that was the joy of this journey. Some spectacular scenery stood out for us and Sliabh Liag in Donegal was one spot in particular which we loved – with the stunning cliffs and seascape. We were exhausted when we finally landed home, but it was well worth it, and it was great to document our journey with a Facebook page and plenty of pictures of where we went.’

See ‘1 beetle 3 ladies 1 Irish country to be travelled’ on Facebook for more on their trip.