shows the RNLI Lifeboat crewmembers under Coxswain Sean O Farrell after they arrived back, with the orange liferaft in the background.

Four fisherman had a lucky escape in the early hours of this morning when they were dramatically  rescued  20 miles off Old Head of Kinsale by rescue services after their fishing vessel, 'Horizon' caught fire.

The Courtmacsherry All Weather Trent Class RNLI Lifeboat was called out at 1.45am, to go to the immediate aid of a 60 foot fishing vessel that went on fire while fishing,

The Courtmacsherry All Weather Lifeboat, Frederick Storey Cockburn under Coxswain Sean O Farrell and a crew of six  were away quickly from their moorings, as a mayday alert was issued by the causality, that their boat had caught fire and they required immediate help.

Once the mayday distress was relayed by the Marine Rescue Co-Ordination Centre in Valentia, all available boats that were in the area at the time, raced to assist in the rescue. Also tasked was the Coast Guard Rescue 117 Helicopter from Waterford.

Within minutes of the mayday alert being issued, the crew of four on the fishing vessel had to abandon to their liferaft as the fire had engulfed their boat.

Just after 2.20am, the Offshore supply boat Pathfinder operating at the Kinsale Gas Field located the bright orange liferaft, after it deployed its own fast rescue boat to the scene. It immediately took all four crew from the liferaft on board safely and while well shocked, they were all uninjured. 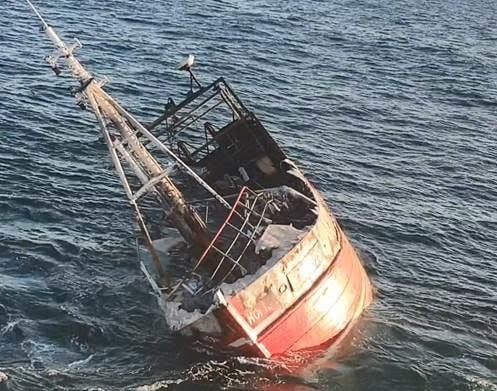 Also arriving on scene was the Navy vessel George Bernard Shaw who continues to monitor the fire damaged boat as it has sunk in the past few minutes.  Those rescued were well relieved to be on land again and thanked the many boats and rescue services involved in this morning’s dramatic rescue.

The Courtmacsherry RNLI Lifeboat voluntary Lifeboat operations manager Brian O Dwyer said: 'We are all so relieved that all four crewmen were rescued so quickly in darkness this morning and praised the fast response of the Kinsale Gas Field Supply Boats who were quickly on scene.'

He also thanked the 13 crew at the Lifeboat Station who rose from their beds early this morning and rushed to the station, in order to help others in distress at sea.

The Lifeboat has now refuelled and re stocked, in readiness of whenever the next call to action may occur.  This was the second callout in a week to Fishing vessels off our coast.