THE retirement of the former Baltimore RNLI coxswain Kieran Cotter, after 45 years’ service has been marked.

While Kieran officially retired at the end of 2020, the station was not able to properly mark the occasion during the pandemic and decided to wait until the entire station and Kieran’s family, two of who travelled from Canada, could all meet and celebrate his service to the lifeboat crew in Baltimore.

Also marked on the night at the event held in Jacobs Bar was the retirement of Baltimore RNLI volunteer crewmember Ronnie Carthy, who stood down after nearly 30 years of service. Ronnie received a book on lighthouses in Ireland, which was signed by the lifeboat crew. 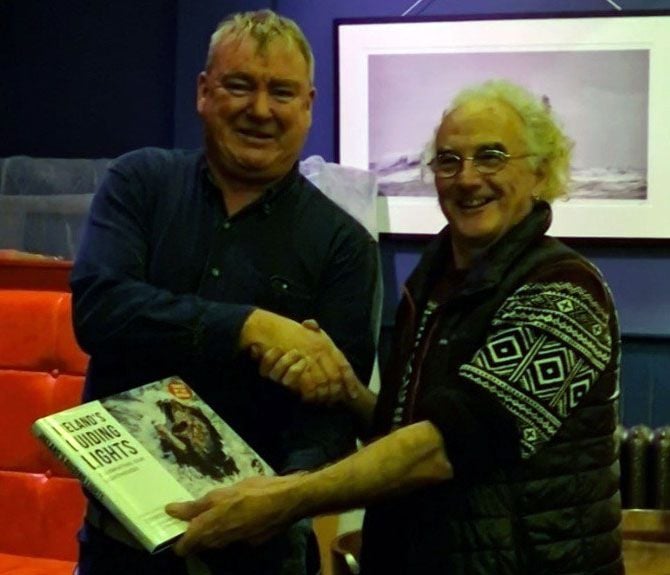 Also marked on the night was the retirement of Baltimore volunteer crew member Ronnie Carthy, who stood down after nearly 30 years. Ronnie received a book on lighthouses in Ireland, presented by Cathal Cottrell, and signed by the crew.

MC for the event was the station’s fundraising chairperson, Declan Tiernan. Lifeboat crew, station management and fundraisers were joined by family and friends to celebrate Kieran’s retirement. Union Hall lifeboat operations manager John Kelleher represented their neighbouring lifeboat station and made a presentation on behalf of the station, while members of Crosshaven RNLI were also present.

As one of the longest serving coxswains in the country, Kieran has a remarkable record of service and community commitment.

Speaking at the event, Baltimore RNLI lifeboat operations manager Tom Bushe, paid tribute to Kieran’s 45 years of service, remembering some of the incredible rescues he had been involved in over that time and the dedication of the man.

‘When you think that in 2019, we celebrated the centenary of the first lifeboat arriving in Baltimore, it really puts Kieran’s length service into perspective. On occasions, customers would arrive to Cotter’s shop to find the store closed and a sign he put on the door saying “Gone on lifeboat – back later.”

‘In October 1991 Kieran was awarded a bronze medal for a rescue of a Spanish fishing boat Japonica and its 15 crew, in storm force winds, 20 miles west of the Fastnet. While the lifeboat was returning to Baltimore it had to put into Castletownbere to land an injured crewman and almost immediately the lifeboat received another call to a yacht in difficulty south of the Fastnet. In total the lifeboat had been at sea for 26 hours. Kieran also received the Maud Smith Award for the bravest act of lifesaving for this service.’

Tom also told how in 2008 Kieran and his crew received recognition from the Swiss embassy for the outstanding bravery and commitment shown during the rescue of Swiss nationals in hazardous conditions and from the United States Congress for the rescue of Rambler during the 2011 Fastnet Race.

‘Kieran was also involved in the callout for the Fastnet disaster in 1979 when Baltimore lifeboat was at sea for over 24 hours. In total Kieran launched on calls nearly 700 times,’ he said.

Kieran’s successor as station coxswain, Aidan Bushe, paid his own tribute to him.

‘Kieran guided us through a lot of tough and challenging callouts and the crew had full confidence in him. We knew that he was able to make those important decisions out at sea, quickly and decisively. He always kept an even keel and was passionate about crew training,’ he said.

During his speech to the packed room, Kieran singled out his family for all their support. He thanked his wife Brigid and his children Cillian, Dearbhail and Ciaran, for their constant support of his volunteering for the lifeboat.

‘I thoroughly enjoyed my time on the lifeboat. It suited me perfectly. When I look back on it, it’s down to the people that worked with me onboard the lifeboat. I’ve had a brilliant crew. They taught me about the sea too, despite my years fishing and in the merchant navy. Down through the years there has been some really sad occasions but some really joyous ones too.

‘When you look back, you think about the organisation itself and the crew. They are brilliant and we never wanted for anything. People ask if I ever felt unsafe on the lifeboat and I have to say, I never have in all the times I’ve been out, and in all the weather conditions.’

Kieran was presented with a three-dimensional chart showing the waters around the local area, where the coxswain would have carried out many calls. He is now a deputy launching authority for Baltimore RNLI.