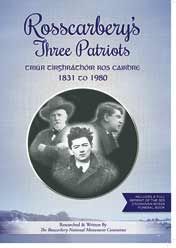 A MAGNIFICENT book, and a historian’s delight, will be launched in Rosscarbery next Tuesday night, when the town pays tribute to three of its most famous sons.

Rosscarbery’s Three Patriots, a book researched and written by the town’s National Monument Committee, will be unveiled in O’Brien’s bar at 9pm.

As Ireland’s decade of centenary commemorations continues, there will also be a special unveiling of a momument in the centre of Rosscarbery on June 28th – the day before the anniversary of the death of O’Donovan Rossa.

It is probably a fair assumption to claim that no other Irish Parish has given more patriots to the cause of Irish freedom than Rosscarbery, with all three men – Jeremiah O’Donovan Rossa (1831-1915), Michael Collins (1890-1922) and Tom Barry (1897-1980), all having lived here.

Jeremiah O’Donovan Rossa was born in Rosscarbery on 4th September 1831. He spent his early years in Reenascreena with his maternal grandparents, and lived through the Great Famine in Rosscarbery, burying his father in 1845. His family emigrated to America, Jeremiah stayed behind, he found employment and love in Skibbereen, and founded the Phoenix Society there. His funeral in Glasnevin was the springboard of Irish Independence.

Michael Collins was born in Woodfield on 16th October 1890, the youngest in a family of eight. His father Michael John, a farmer and classical scholar, was a huge influence on young Michael, before his death when Michael was only seven years old.

One of the people who met Michael Collins in Rosscarbery on the fateful day of his death on August 22nd 1922, was Mrs Hannah Murphy of Cross St in Rosscarbery. Mrs Murphy is still hale and hearty and now approaching her 104th birthday, and can still recall that day.

Tom Barry, likewise, came from a long established farming family in Rosscarbery. His father joined the RIC, was stationed in North Cork where he married Margaret O’Donovan from Liscarroll. The family moved to Kilorglin Co Kerry where Tom was born on 1st July 1897.

His father resigned from the RIC and returned to Rosscarbery to run “The Arcade” as a retail business for about eight years, they subsequently moved to Bandon and then emigrated to Liverpool.

After the launch of the book on the lives of these great men, Rosscarbery will continue marking Ireland’s decade of centenary commemorations. There will be a special unveiling of a momument in the centre of Rosscarbery on June 28th – the day before the anniversary of the death of O’Donovan Rossa.

This unique monument brings all three men together for the first time.